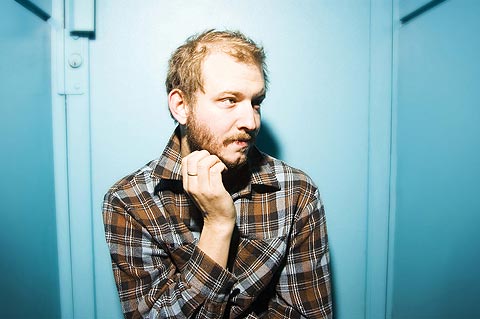 Given the last several years of eighties dance-pop revivalism, it was inevitable that we would eventually move on to that decade's other great musical form: soft rock. Bon Iver's self-titled sophomore album has dropped like a Phil Collins drum fill; it's a sappy haze of synths and programming, especially its divisive final track "Beth/Rest," which comes complete with noodling guitar and saxophone. Reviews have mostly been positive, if mixed, but the album is more remarkable as a cultural signifier than anything else; considering this generation was supposedly raised on irony, Justin Vernon's technoballads sound pretty sincere.

For proof, watch Bon Iver's cover of Bonnie Raitt's "I Can't Make You Love Me" on Jimmy Fallon from a few weeks back. The performance itself is middling and showy, but no one can doubt Vernon's love for the song. And who can blame him? "I Can't Make You Love Me" is probably one of the finest pop ballads ever written; in the chorus, Raitt's voice starts high and spirals low, the lyrics simple and despondent ("I can't make you love me if you don't/You can't make your heart feel something it won't"). It even has a great creation myth: Mike Reid, a co-composer of the song, read in the newspaper about a guy who got drunk and shot up his girlfriend's car. At his hearing, the judge asked him if he'd learned anything, to which he replied, "I learned, Your Honour, that you can't make a woman love you if she don't."

On Bon Iver, Bon Iver, Vernon transposes the visceral earnestness of his debut LP For Emma, Forever Ago onto a different form. He's also not the first musician to resurrect the eighties ballad. Destroyer did it with Kaputt most notably and recently, but as always with Dan Bejar, nobody's sure whether he's laughing at us or with us. Here in Montreal, acts like Pat Jordache and d'Eon sound less like dance parties and more like sleazy lounge bands. But none of those artists sound as sad or desperate at Vernon does on Bon Iver, Bon Iver. More than anybody else, he sounds like a man who's learned that he can't make a woman love him if she don't.

But soft rock is cheesy—so very cheesy—which begs the question: is Bon Iver, Bon Iver meant to be at least a little ironic? Like "hipster," the word "irony" has become meaningless; it's both a lazy insult and a hazy descriptor, used whenever one's pleasure seems less than fully earnest. But enjoying something ironically can also just mean having a sense of humour. As my friend Alex Molotkow recently wrote, "you can like Steely Dan and still think they're corny for all the reasons a Crass fan in the '80s would. So you kind of like them and disavow what they stand for at the same time, perhaps by making a little joke out of the fact that you like them. That's what irony is to us. A way to like everything." We are omnivores; it's how we were raised. Saturated in both pop culture and its adoring critic Cultural Studies, we throw up our hands and declare, Everybody wins.

Someday—and this will happen sooner than you think—the music we currently listen to will sound very, very dated. It will sound like the music of a certain time and place, which is exactly what it is. It will become a joke. Its current practitioners will reinvent themselves à la Madonna, or die à la everyone else. And then, a few years after that, a revival of sorts will begin, and a new generation will rediscover what this one had to offer. We have ricocheted through a great many of these revivals recently (seventies garage rock has come and gone, while fifties girl-group pop is currently going strong), and the temporal distance between antecedent and descendant is rapidly shrinking (see: the resurgence of grunge and shoegaze). Bon Iver's embrace of soft rock feels brave right now. But there are braver forays yet to come; in the future, some band will reinvent emo or scrunk, and it will sound awesome, and the cycle will begin anew.

—Music Made With Machines
—The Music We Hate: Destroyer
—Interview With Pat Jordache