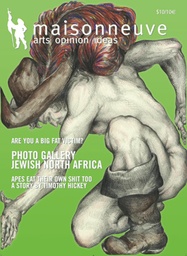 On the evening of January 5, 1998, we headed downtown to watch the Titanic sink.

The most expensive movie ever made had hit Montreal a week earlier, and reports from friends were that it was actually worth seeing. Big screen, big sound, lots of rushing foaming water and debris: while it didn't exactly leave us with much to chew over when we emerged from the Loews, the film had succeeded in keeping us riveted (no pun intended) for its not inconsiderable duration. That made it worth the ticket for our purposes: an end-of-the-day diversion for a pair of home-based, self-employed, sometime sufferers of cabin fever. We crunched and slopped across puddles of freezing slush to queue up at our bus stop. A sleety rain was falling, not unheard of for Montreal around New Year's. The bus smelled seasonal, of damp wool and beery breath. Nothing to tell, for the moment, that the city had begun the cruise towards its own iceberg.

Followed a fitful night of strange noises-loud rushing, rumbling, crashing sounds-as if the movie's soundtrack had pursued us into sleep. Around 4 a.m. I came sufficiently awake to realize the sounds were no dream. What we were hearing was wind-driven rain, ice removal equipment on the streets, and huge tree limbs cracking like great bones under the buildup of ice, then crashing to ground.

In the morning we saw the devastation. The full-crowned linden that shaded our front balcony was down-on the neighbours' car. In the yard behind us, one of two strapping Norway maples was done for, its trunk split almost to the base; the other had lost its crown. Downed branches and whole trees blocked streets and littered yards. On the radio we heard the first reports: an estimated 15,000 trees lost or damaged in the city, the most widespread power blackouts in the province's history, more freezing rain forecast. It was Tuesday-still the first day.

This ice wasn't nice. It encompassed the trees like an organism, like a malignant blight. By that first morning it had already moved beyond fairyland to freak show-every twig fattened to triple its own thickness, a glassy-white tumescence that dragged down branches, twisting their bare geometry into unnatural torsions. As the storm progressed, the casings lost their tubular smoothness, forming lumpy globules like fat beads along the branches.

It was the pull and counter-pull of opposite branches sagging earthward that split the trunks with a sound like thunder. A sound that dogged our days and nights with each new wave of freezing rain: every five or 10 minutes, the gunshot crack of a tree exploding, then the crash to the ground of crown and branches. After a while one stopped running to the window to see which tree was gone this time; one crossed one's fingers and began counting what was left. Night after night, renewed rain and wind, ice pellets ticking the skylight, the tortured ghostly trees shaking their glass antlers in the brutal dark. Behind us, in blacked-out Outremont, the heavy-machinery rumble of somebody's generator provided an unnerving accompaniment to the periodic crashes.

Because our quarter of Plateau Mont Royal never lost its power, there was nothing to distract us from the holocaust of trees. Elsewhere in the city, trees were not the main event. Elsewhere, as electric pylons crumpled under the same stresses, residents huddled in cold dark homes making do with whatever they had: stoking up woodstoves and fireplaces, running gas cookstoves overtime, running out of batteries and candles. Neighbours shared food, Thermoses, radios; families bedded down together in tuques and mittens, under heaped duvets and sleeping bags. Some asphyxiated themselves barbecuing indoors, some died in their beds of hypothermia. Oil and gas heating systems sat useless, dependent on electric thermostats, pumps, and fans.

By week's end, thousands had abandoned home, moving in with family, friends or strangers, checking into downtown hotels (many of which subsequently lost their power) or heading for the public shelters whose occupants multiplied daily. On our block, everyone soon had a house guest, or several. An air of surreality set in with news that the downtown core had lost its power. The metro was down, stranding hundreds; the Eaton shopping centre had to be evacuated when its glass roof caved in; three of the city's bridges were closed because of falling ice.

Then our neighbourhood lost its water. The pumping station was down. People moved fast, draining what remained in their systems into kettles and containers, lining up at local groceries for bottled water (none to be had within half an hour), chopping ice off balconies and filling buckets to melt for flushing toilets. As we jumped to these unlikely tasks, a sense of alarm set in. No water? How widespread was this? How long could it go on? Nearly a week passed before we learned the truth: the city itself had cut power to the pumping station for a few hours, in a move to avert disaster. The island of Montreal was reduced to a single power source, perilously overloaded. Had that last line gone, evacuation of a city of three million would have been in order-with roads and bridges still blocked, with cars mired in ice, with no communications system-and no evacuation plan.

The storm was the human interest buzz of the season. Cleanup went on for weeks, aided by U.S. army personnel who were stunned by the extent of damage. There was a run on generators as prudent householders insured themselves against a repeat performance. Then people got on with their lives.

But I remember how a man from west-end Notre-Dame-de-Grâce (blacked out for two weeks) described on the radio how he'd passed the first few days of the storm: cruising the downtown restaurants and movie theatres to keep warm, coming home only to sleep. He'd seen Titanic six times and was ready to see it again. He wasn't alone. Montrealers, by themselves and in families, lined up around the block during the ice storm to see Titanic a third and fourth time-allegedly to forget their own troubles and keep warm. But it wasn't the only movie in town.

Yet why was the response to Titanic exactly the same in places untouched by the ice? Commentators attributed the movie's popularity to its romantic subplot and teenage idol, to the great ship's mythic allure and a hunger for old-style Hollywood glamour. Was there something they weren't seeing?

What went down with the great ship in 1912 was the complacency of the previous century, the assumptions and trappings of a class-based society. What did not go down was the technological hubris of the century that had just begun: a century in which technology itself would be the unsinkable ship, universal entitlement the tragic assumption-with no regard for environmental implications, no grasp of cultural or political ones, no preparedness for natural or unnatural assaults upon the edifice we were building. First-class tickets for all, lifeboats for none: such has been the aspiration, and the arrogance, of the developed world in our own age.

Hubris and pathos: it's their interplay that grips us in the story of the Titanic. It's the moment of sinking we want to replay. It bowls us over that what seemed so substantial-the multi-storied castle of lit ballrooms, grand staircases, fine furnishings, a self-sufficient man-made world of beauty and luxury-could slip so swiftly and irrevocably into oblivion, succumbing in an instant to the element it was designed to ride upon.

If the movie struck a chord with the popular psyche as we steamed towards a new millennium, orchestra bravely playing, it may be that on some level we were beginning to doubt the substantiality of our own lit ballrooms. By now, it has become harder to deny the signs of climate change-harder to ignore angry mutterings down in steerage. Questions are being voiced that were only in the air before: How sustainable is the way of life we were raised to take for granted? At what cost our dependence on the liaisons we have set up to sustain it? When did privilege become a right? Collectively, we may have begun to suspect we are on a collision course-or worse, that we've already grazed ice and that underneath us, inexorably, the hold is filling.