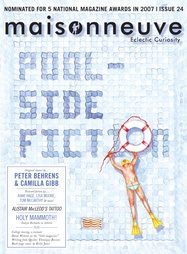 Ibi Kaslik is busy right now plotting a move from Toronto to either Paris or Regina to write. Our vote is Paris, but either way, this is good news for fans who are waiting for her next big work. Kaslik's debut novel, Skinny, was shortlisted for several awards after being published by HarperCollins in May 2004. Skinny explores the hopes, fears and neuroses of anorexic protagonist, Giselle. There's a good dose of family dysfunction in the mix. Kaslik's second novel, The Angel Riots, is due out in the spring of 2008 with Penguin Canada. For a taste of her writing, check out "Type Two Conditional" in Maisonneuve's current issue of poolside fiction.

Maisonneuve Magazine: If you could get a tattoo of one title from your own oeuvre, which would you choose and where would you be inked?
Ibi Kaslik: A slug eating a piece of grass and smoking a cigarette. Oh, I misunderstood the question. I thought it was about writing process...

MM: What's the stupidest question you've ever been asked in an interview?
IK: I have to say the ones about whether structure or character is planned. For example, "These characters are very different--did you intentionally create them as separate entities whose characteristics would serve as contrasts? Did you realize you were ending a chapter here and beginning a chapter there and that that would have an effect upon the reader?" I understand that some people believe writers fall out of bed, grab a pencil and accidentally create something without planning, but come on, really?

MM: What would you do if you weren't a writer?
IK: Push a shopping cart full of garbage or be an architect. But seriously, I'd probably be a tax lawyer like the rest of my family.

MM: If you could switch brains with another writer, who would it be?
IK: Mark Z. Danielski. As in, what's it like to write like you live in a timeless dimension (outer space), write non-books and have your work published all glossy-paged and fancy--and still have a huge audience? Plus, I want a male writer's brain and I met him once, too. No one would hardly notice if we switched brains.

MM: What's the one book that you are supposed to read but have never gotten through?
IK: Anything by Alice Munro or James Joyce.

MM: What's the best way to kill a character?
IK: Death by lamb chop. In his adult works, Roald Dahl liked killing his characters with cuts of meat and meat grinders. No one can really top that, in my opinion.

MM: Write a haiku about your latest work.
IK:    The Angel Riots:
about Indie music and
prairie dogs, oh yaay!

Another Reason Not to Do Speed

In It for the Cottage