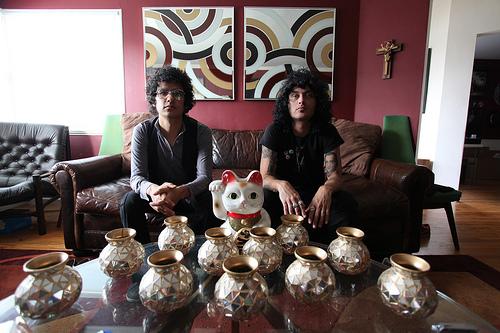 Any evaluation of an over-hyped band usually comes down to a competition between which is more pretentious: the music or the fans. Yet despite the Mars Volta's legion of frothy followers whose YouTube comments alone make one want to poke out an eye with a dull plastic fork, the music—astonishingly—proves worse.

There are two schools of thought on the savage lacking that is the Mars Volta. The first—that of critics—believes that what started off as a cacophonic and immature band (though courageous and creative in their genre-bending and blending) has, throughout the course of five major albums and additional live recordings, begun to harness their talents and demonstrate the restraint necessary to be good. In other words, they now suck less.

The second school—that of the original fans—holds that what started off as an edgy, progressive, inspired group of artists has devolved into a narrower, more conventional troupe of mainstream rock performers. Playing to the critics is the death of originality, so the argument goes. In other words, even to some original Voltamaniacs, the Mars Volta now suck.

I fall in the middle of these two categories. I think the Mars Volta sucked both at the beginning of their career as well as today, albeit for different reasons.

The initial problem with the Mars Volta was rooted in their inability to reach the screaming-versus-singing ratio appropriate for fulsome music listening. Yes, music is about an experience, but at some level, it also needs to be about aural pleasure. The Mars Volta from the get-go relied too heavily on the former and not enough on the latter. Difference and originality have value; however, they don’t guarantee a band’s place in your home.

This issue of basic usability was exacerbated by the concept album structure. Heavy and intense themes—for example, a comatose man’s otherworldly dreams—make for a heavy and intense listening experience.  Call me shallow, but some themes are simply inaccessible for a majority of listeners, making the listening experience a lonely one for anyone who feels external to the albums. At times the Mars Volta’s work comes off as a musical inside joke.

With clear Pink Floyd and Led Zeppelin influences, these recognizable psychedelic undertones could increase a concept album’s accessibility. Unfortunately, most Mars Volta tracks are covered with layers that make the albums busy and tiresome to sit through. Think Decemberists as disco-mix with orchestra, but with three lesser-known descriptors.

And whereas some of the more hypnotic tracks are ruined by harsh rhythms, other songs with amazing beats are interrupted with too much distracting, synthesized sound, such as in “Aberinkula.” This is maddening because it further demonstrates that the talent is there—just not the restraint.

Turning the lens to contemporary works, the Mars Volta’s most recent album, Octahedron, is—as formerly harsh critics will begrudgingly note—much better. In fact, I will go so far as to say I enjoy some songs, including “Since We’ve Been Wrong.” Unfortunately, it’s but a drop in the anti-suck bucket.

This is particularly true regarding their more recent live recordings, which demonstrate that whatever thoughtful reflection they’ve mustered in the studio is left behind in the dressing room. The restraint that plays out so beautifully in Octahedron is lost in the self-indulgent, interpretive jam sessions that leave even their die-hardest fans stifling yawns. Whether the Mars Volta are ignorant or just indifferent to this, only they know for sure. But I comfortably hazard a guess that Omar Rodrigues-Lopez & Co. meet any criticism of their musical bombast with either a “You don’t get it” or an eye roll in the direction of their 2009 Grammy Award for Best Hard Rock Performance for “Wax Simulacra.” (How quickly we all forget Scabdates.)

So the annoying Voltanistas may gush ad nauseum about effects usage and compete over each other’s knowledge of Afro-Cuban folklore. It is but a futile effort. For fan pretention is no match for the pretention of the Mars Volta.

Denise Brunsdon is a sometimes-writer originally from Vancouver who now lives in Toronto by way of Montreal. She is best known for her commentary on social media, public policy and pop culture fails.