Toronto, Friday, June 25, backlit in the light cast from Saturday, June 26. What can I tell you that doesn’t bring tears to my eyes? I’ve seen everything by now. This is about Friday, but Saturday unfurled—the children attacked in safe zones, the dark riders hunting families—as destiny figured it would precisely because of Friday. 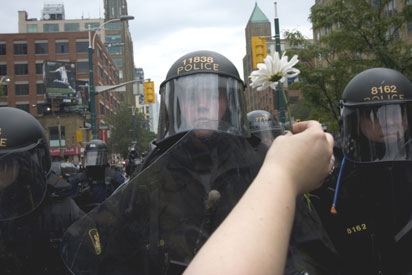 My wife, clearly the dominant person in our relationship, had on Saturday placed me under house arrest because of Friday. At six o’clock on Saturday, my oldest son had googled, simply, “G20 Toronto,” and the very first entry was a picture of me goofing around for the troops. Whoops. In times like this we turn for dissatisfaction to Woody Allen, and we started watching a vapid movie about my wife’s family’s city, Barcelona.

Partway through the movie my wife leaped from the couch and said, “We’re going down to the G20. We can’t just sit here.”  She turned a beady on me. “You,” she said, “better behave. And besides, we’ll stay way back from trouble.”  That’s how we got into the trouble I’ve chronicled elsewhere—precisely because I was on my best behaviour. That—following the rules—was how we got attacked, our ten-year-old very, very nearly killed, our tall fourteen-year-old hunted for nearly two hours by vicious men on horseback working with footsoldiers. You think I’m exaggerating? Go fuck yourself. Now is the time for swearing, for appeals to the gods.

But Friday?  Friday was for fun. For joking with commanders. For playing with my balls. I do my best tricks with four balls on a bike. On foot I’m loveable and goofy and only drop my balls to get closer to certain people. Though I’m a drifter and have spent my life in strange lands, now in these last years, in what passes for maturity, I have come to my home city. Our people on both sides of the family have lived right downtown in the Goodly City for two centuries. About my own level of maturity, let me just say as an aside that in November my youngest son will be my shoe size, and he’s a sterner fellow than I am.


My shrink’s at Yonge and College in a gorgeous old building above an American coffee franchise whose name you know because you live on this planet, and whose windows I like to menace with concentrated psychic energy. This is never enough to crack the windows, and unfortunately I’m committed to a life of nonviolence.

I do Lacanian psychoanalysis. Being misunderstood as a child or something is nothing compared to being misunderstood when you tell people you do Lacanian. The great thing about Lacanian is that your shrink really listens to you. My guy makes no money at all off me, but he has exactly the same weird name as my brother, and I have complex dreams about the two of them. The latest task I’ve imposed on myself in there is revisiting 1963, when I was five and lived in a tract house in Massachusetts with two fundamentalist Christians (hi mom, hi dad) from a long line of Toronto fundamentalists.

In the middle of this on Friday the chanting starts—“Let them go! Let them go!—but I hang on hard to 1963, remembering the milk box outside our house as the neighbour yells that Kennedy’s been shot. I was born then, at age five—born into my first memory of an event. Here in Toronto people are running up and down the hallway, figures loom in the smoked glass. “My mother,” I say—a TV cameraperson barges in to our analysis but I refuse to get up off the couch, “my mother,” I cry out, as my analyst runs to the door to try to squeeze the camera guy out. I yell directions to the roof for the cameraperson because I’ve juggled this whole building and it’s true that this building gives the best view of the tense scene below, but I stick with my mother, and Kennedy, and the milkbox, and I’m crying and I’m desperate to be up on the roof tossing water balloons up into destiny or onto a cop’s riotously decorated head, but I stick with the couch. The shouting is so loud that I’m shouting over it in turn. God knows what my analyst with my brother’s name is thinking but I’m not going to back out now. And at the end of the hour my analyst shouts his usual, “That will be all for today,” and I spring to the fire escape. Paddy wagons everywhere.

I sit on the fire escape staring at the wagons—my father throughout my childhood had threatened me when I was bad with a black Moriah paddy wagon that would take me back to Canada—telling myself one hundred times that I will not do anything to end up in a paddy wagon. Then I run down and juggle the gaggle of cops there at the Winners, where I’ll find out later two activists were snatched at random, beaten and dragged off while I was exploring 1963.

Because I’m a drifter and a snooper I’ve seen things you wouldn’t believe, and other things you might—a young man long ago hanging by his neck from a tree in the Valley of the Don like the fruit of the knowledge of good and evil, or my nephew dying from a car crash, body fit but brain smashed, wrestling with two young therapists, woman like angels or the very gods, in gauzy hospital gowns, life grappling with death. Things too holy to fully tell. But of Friday, I can give a full account.


On Friday I saw the Good City of my birth and ancestry overrun by warriors in puffmail. I saw the light almost extinguished by darkness. I am a man of medium courage, afraid of throwing up, afraid of small enclosed spaces, afraid of the Semitic storm god, and now afraid and sometimes exhilarated at being hunted on horseback for hours on a Saturday evening. On Friday, I was not afraid of the puffmail warriors, though I ought to have been. I juggled Yonge south, a Dundas streetcar east to University. I juggled forth at a jog when the streetcar could go no further, and found the light of good people walking the streets of their city north of Dundas. It is hard for me to walk, juggle four balls, and see where I’m going. Well, two out of three ain’t bad. I kept walking and juggling.

Puffmail warriors would loom in groups into my vision, but I could only avoid them at the last minute. If they yelled at me, I dropped my balls where I wanted to go and went anyway. Perhaps if you were there you saw me in a brief but intense shouting match with multicops. We were batting the word “sidewalk” back and forth as I shifted sideways.

I am in the street of my own city; our people have been protestants here for two centuries. Go to Knox Church and behold my great great great grandfather on the wall. I will not—I would not on Friday, anyway—be moved by puffmail warriors. I am the court jester, called by my people in their hour of need. I have arrived. Google me and weep. I am Friday’s joke before Saturday’s punch line.

Blocked going south, my people turned west. “Follow the juggler,” I called. Which turned out to be: follow the nearsighted guy. I think we were going east on Elm when I had the bright idea of leading a group south down Simcoe or St. Patrick’s. There were thousands of us—not like the few hundred on Saturday. But of the thousands, no more than fifty thought it was a good idea to follow a juggler down a side street blocked absolutely by dark warriors. I juggled the warriors, then went back to a flower bed and picked—my Lacanian unconscious rife with auguries—a small red flower which I’d “forgotten” is the flower my wife likes—impatiens, I think, and with my balls in one hand (what the scriptures of my protestant ancestors would call girding up my loins), and the flower in the other, I stepped boldly forth where no man would go.

Not for want of trying. I was like, “Yo, younger dudes, any of you want to help me carry this flower to those little old puffwarriors over there?”  Funny, the things we’re not afraid of, eh?  Thank god it’s Friday. A semi-circle of thirty cameras circles me from behind, but not one of them can be said to be ahead of me nor even beside me. The road is mine alone. You picked it, you own it, pal. And now here is the speech I gave, and if one of you googlewranglers out there in Kanadaland can find it for me and restore to me the fifteen minutes of fame I have earned, give me a jingle.

I stepped forward a few feet and laid the flower on the pavement. Everyone was quiet.

“Not brave,” I repeated, “but perhaps someone younger and braver than me will carry this flower forward?”

“Not brave,” I insisted, “but perhaps brave enough for this.” I picked the flower up and carried it a few feet closer. The men were big as cartoon characters, all the same height except for their very short commander. It was striking how short he was. He was fingering what looked like an old-fashioned machine gun, massive in his small hands. At the time I thought it might have been a machine gun (I’ve since found out it was probably a tear-gas thingy), but I stepped forward anyway into the space for medium brave people. I petitioned the crowd for people younger and braver than me.

I moved the flower forward again. I held the talismanic flower aloft. “For my ten-year-old son Liam. For my fourteen-year-old son Sebastian. For my wife who thinks I’m picking up the kids. I do this for a better world, one in which the police do not attack their own people.” The short commander leaned over and whispered to the large warrior to his left.

“I see you whispering there,” I said. “I’m not afraid of you anymore.”

I said the first bit. Did I actually say that last bit out loud? It’s a funny thing; I really wasn’t afraid at all. I gave a brief speech about the dream I have for a better world. I’m very proud of the speech but—full confession—I did sort of mar it by making a comment about how I wished the short commander (I apologize now for saying this) would quit whispering. See what I mean about how on Friday I wasn’t afraid but I should have been?

Coming from a long line of protestants and other protesters makes me a bit of a preacher. I did two short juggling routines and dedicated them to my children and a better world. Finally some nice person—or perhaps a parishioner bored by my sermon—put a friendly hand on my shoulder and said something like, “that’ll do, pig, that’ll do.” I quitted the scene. Were there winners and losers in this tense tableau? What say you, reader?

I am the guy you might have seen on the top of a car on Elm in a thick crowd dammed back by the police, thanking you for attending City Without Cars Day while the cameraperson skedaddled. I am the goofy juggler of the dropping balls on University. But did I not do well to stand up for the Good of Toronto, with my wonderful wilty flower? Was that not my moment?

On Friday, the darkness of Saturday is a long way off. Celebrate, and thank the gods it’s Friday.