“Even in places I’ve had where neighbours aren’t an issue, I don’t really feel comfortable enough to sing that loud for extended periods,” admits Carl Spidla. “Seems kind of mean to the people around me.”

Sipping gazpacho at a café in Montreal’s Mile End neighbourhood, the soft-spoken musician seems unlikely to disturb the peace. But Spidla has recently teamed up with a choir to play “secular gospel” under the name Carlo Spidla and the Golden Ladies, cranking out tunes more raucous than his folkier solo work. His earliest recordings, Spidla admits, were all about “writing Bob Dylan songs as best I could.” 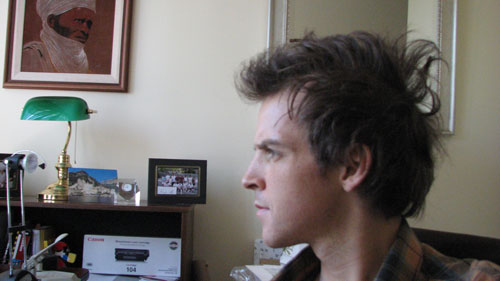 “I’m a firm believer in going directly through things you love to get to where you want to be. You kind of need to be allowed to do that,” he says. “You obviously don’t want to get stuck there, but as long as it’s a stepping stone—you gotta do what you gotta do.” On July 8, Spidla will play a different kind of music: the kind he doesn’t particularly like. He is among the musicians who will play covers of despicable tunes at Maisonneuve’s summer issue launch party, under the banner of "The Music We Hate."

Madeline Coleman: Was there anything that came to mind right away when we asked you to play a song that you didn’t like?

Carl Spidla: At first I was going to pick songs I had heard too much—I was going to pick a Bob Marley song or something that I just don’t want to hear any more. But talking to James and Sean, they put so much more thought and brain power into it, I realized I should really pick a sacred cow.

MC: What kind of sacred cow is ripe for a cover?

CS: The argument we ended up having was about Elliott Smith. I said, “Oh, I’ll do Elliott Smith, I hate him.”  I don’t really hate him, but it’s something I kind of love but also hate, yet also kind of respect for being good in one sense.

MC: Songs you hate to love.

CS: Exactly. I like the conflicted duality of that.

MC: I’m actually kind of surprised none of the writers took on Elliott Smith, but I think the whole death thing kind of puts people off.

CS: Yeah, I mean, he really meant it. The one thing you can’t accuse him of is, you know, being insincere in any way.  Clearly tremendously sad and depressed. At the same time I don’t think you can’t talk about his music because he had a sad life. But it is a fine line because he did have clinical depression, so you don’t want to be like, “Oh, what a sad sack that guy was.” It’s a serious medical thing. But you don’t want to handle things with kid gloves in terms of music. You should talk about things honestly.

MC: The funny thing is that people cover his songs in earnest.

CS: Well, that’s the thing. If I’m going to do it, I have to reimagine it because I don’t want to just be the guy doing Elliott Smith covers. Nobody wants to be that guy.

MC: Your music seems to come from the tradition of playing songs that aren’t covers so much as they are standards or folk songs. Yet it’s funny that now playing covers is seen as kind of a kitschy thing. What do you think about that?

CS: In Montreal music, especially in this neighbourhood, there’s a lot seriousness. It’s actually kind of nice to disperse it, to have a night like this that doesn’t take itself too seriously. Playing covers, as you grow older, is somewhat frowned upon.

We did a thing at the Mile End Mission recently where we were singing to a bunch of the older ladies at some kind of open house. We had to dig up all these old traditional songs we didn’t know because it wasn’t really an environment to share new compositions or anything. It was fun, actually. We got to dig up all the old Hank Williams songs and standards to keep the good ladies of the Mile End Mission happy.

MC: Some people might be very serious about, say, jazz, but would say the idea of a cover band is cheesy. But obviously a lot of jazz musicians often played songs that were not originals. That song Nina Simone is singing—she wasn’t the first to sing it.

CS: It’s true, and in many other kinds of music, lyrics can be shared, melodies often can be shared. That happens a lot less now. People are a lot quicker now to point out that so-and-so has ripped off so-and-so’s beat or style or whatever it is. But it’s a really healthy thing about music because that’s how it evolves: by taking something and turning it in something else. A small minority is really tacking something new onto that.

MC: And then if you get into legal issues of fair use and creative copyright...

MC: Wait—what are you stealing?

CS: Usually stylistic things, finger-picking melodies. For me, a lot of songwriting comes from hearing a song you like and just writing it again with a different melody. You had something really concrete to start with and then you’re literally just rewriting a song, essentially divorcing it from where it came from. It is a really easy way to work and really nice sometimes because instead of working from scratch you’re working with what someone else has done and making it your own, hopefully.

MC: When you first came to Montreal, how did you get involved with music in the city?

CS: I first lived in the lower Plateau, around Prince Arthur and St. Laurent. A big part of me had said, “I’m going to go to Montreal and get my music together,” but it was actually really difficult, especially when you’re young and developing social circles, to try to say you need time to yourself.

I went to a lot of open mics. I didn’t know where else to go. You end up playing at a lot of bars and a lot of noisy venues. I developed a loud voice while doing that to counter big, noisy barrooms. That’s kind of what I’m singing with right now, rather than my, uh, songwriterly voice.

CS: A more subdued, quieter, more quote-unquote elegant voice. It’s been kind of nice to sing loudly. I’ve got a space where I can go at night and sing as loud as I want.

MC: So you have a studio? I guess that’s where you’ll be working on the Elliott Smith.

CS: Ah, the Elliott Smith is quiet enough. If I’m really doing it right I should do it in a dark basement somewhere, with a few candles.

Carl Spidla plays Maisonneuve's "The Music We Hate" issue launch party on July 8 at le Cagibi (5490 St. Laurent) in Montreal, along with Pat Jordache and Charlotte Cornfield. $5 cover includes a copy of Maisonneuve Issue 36 (Summer 2010). Check out the launch party on Facebook.

—The Music We Hate: Online Supplement
—Interview With Charlotte Cornfield
—Edge of the Island