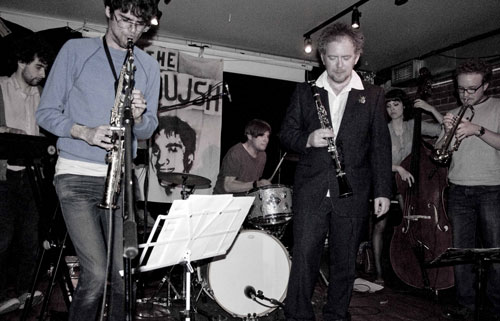 According to Malcolm Sailor of the Youjsh, the band's ideal show would be a celebratory gala for the announcement of world peace. Unfortunately, that won't the case when the Montreal six-piece takes the stage at Maisonneuve's Spring 2011 Issue Launch this Tuesday, April 5 at Divan Orange. (The issue's cover story is, er, about Afghanistan's history of war.) Still, the band known for incorporating the name "Steve Day" into every single song title promises to deliver a frenetic, almost-but-not-quite-danceable good time.

Amie Watson: Where did the band name "The Youjsh" come from?

Malcolm Sailor: If somebody asks you what you've been up to lately, [you say,] "Oh nothing much, just the youjsh." It's something we say that we weren't really sure how to spell, and so we came up with a way to spell it that sort of works. Occasionally, people actually know how to pronounce it without me explaining it to them, but not that often. In a way our music is almost imaginary folk music, so having this foreign-looking word seemed appropriate.

AW: Does the imaginary country where your imaginary folk music comes from have a name?

MS: No. We don't really have an imaginary land. I'm just throwing that out there because I don't know how else to describe us.

AW: But your music isn't really so standard. It's not your average Montreal indie rock.

AW: You wouldn't define yourselves as klezmer?

MS: No, actually, I wouldn't define us as klezmer. Some people in the band have a little bit of a klezmer background, or know a little bit more about klezmer music than I do, but I don't really know anything about it and I'm pretty hesitant to associate myself with it. It comes up as a label because it's a convenient comparison for the kind of sound that we're talking about, which is using similar scales and rhythms as klezmer music or Balkan or Eastern European kinds of folk music. Klezmer is just the reference that's readily available for most people for that kind of thing.

AW: So who's in the band? How many members do you have and what do they play?

AW: I have a friend and he has a picture of a bird in his apartment. And the bird's name is Steve Day, and the first time I heard it I did a double take. I thought I'd uncovered the secret of Steve Day.

MS: Sorry, I don't know your friend or his bird.

AW: Do you get sick of people asking you about Steve Day? Are you going to find new inspiration for your next songs?

MS: No, I'm pretty good at stonewalling, so I don't get that annoyed about people asking me about it. I've come to the point where he's more of a mythical character than anything else. It's an iconic name, I hope. It's almost better in one's imagination than the real Steve Day could possibly be.

AW: So are you moving away from Steve Day in your future works?

MS: Not in the foreseeable future. I mean, everything gets old after a while. There's also considerable inertia that happens once you get on a certain path. I'm still enjoying it. The main thing is when you write instrumental music—at least if you're me—coming up with words to name this very abstract bunch of notes is hard, so having a theme really helps. And it's fun.

AW: What do you have planned for the Maisonneuve launch?

MS: I'd like to say we have something tremendously out-of-the-ordinary planned. We're out of the ordinary anyway. We'll do our best to be our extraordinary selves. I wish our music were more danceable than it is, actually. It's not pure dance music.

AW: It's kind of hard when the rhythm keeps changing.

MS: We have very active imaginations, so things change all the time. It throws people off, maybe. It gives them a lot to listen to.

AW: Is the music kind of malleable every time you play it?

MS: There are things that are the same every time, and there are things that are different. Basically 99 percent of the notes that most of the instruments are playing are written, and we basically do it the same way. Nobody in the band is really rigid but it's more or less set. But then the drums are almost like a soloist that just explodes on top of everything else. To us it's different every time, because our tempos are unpredictable. A bunch of live musicians getting together and playing together is never the same every time.

AW: Do you play off each other's energy a lot?

AW: And what about the audience energy?

MS: As long as people are paying attention, it's pretty cool. Sometimes you've got a vibe where everybody's just sitting there and being quiet, but they're attentive and that's great. On the other hand, sometimes it's a crazy party and people are dancing around and it's not quiet, but that's also great. It's a bummer when you play and you feel like you're being ignored, but it doesn't happen to us that often.

AW: Are you guys recording soon?

MS: The impetus to record is sort of a necessary step in establishing a career as a group, but I don't think it's what most excites anyone in the band, because it's really a band that thrives on the energy of live performance. I think it's best heard in that setting.

You can hear the Youjsh in their ideal live setting at Maisonneuve’s Spring 2011 Issue Launch, which takes place on April 5 at Divan Orange and also features Flow Child, Cadence Weapon and Wind-Up People.