There's a moment in the 2008 copyright-law documentary RiP: A Remix Manifesto when  mash-up artist Girl Talk, known for his erratic music sampling, really gets at why he mixes the songs he does. "I just want to put Elton John in a headlock," he tells the camera, "and just, you know, put a beat behind him, and pour a beer on his head."

It's a great sound bite, but it also says a lot about the way we often treat people like John—famous rich white men who seem less like people and more like institutions. There's something liberating in finding a way to fuck with them.

Kate Beaton is no stranger to that impulse. The twenty-eight-year-old Nova Scotian has made a name for herself by, as she puts it, "setting a blustery old white fellow in his place" with her award-winning web comic Hark! A Vagrant. In Beaton's world, Jules Verne sends Edgar Allen Poe adorably bromantic fan mail, a pint-sized Napoleon stuffs himself with cookies and Joe Kennedy Sr. scolds baby Ted, whose unambitious babbling he cannot ignore.

"Son," he demands flatly, "do you really think you're going to get into the White House with an attitude like that."

This month, Drawn & Quarterly releases a compilation of Hark! A Vagrant under the same name, including reams of previously unpublished material. The collection reveals Beaton's flair for marrying dry historical facts of varying arcanity with cheap, childish gags in a way that never seems to get old. The silliness might be necessary: her comics are populated by historical and literary figures who many readers last encountered in mind-numbing high-school classes. Not to mention that many characters are also mass murderers. In Beaton's hands, however, Napoleon, Henry VIII, Viking raiders, and even nineteenth-century serial-killer duo William Burke and William Hare, are by turns over-the-top party animals, comically camp or bumbling incompetents.

But Beaton, who recently relocated to New York, says she intends her comics to be more about rooting for the underdog and poking fun at the ridiculous than anything else. "I don't really have an agenda with these comics," she admits via email. "Only that I want to make them funny." 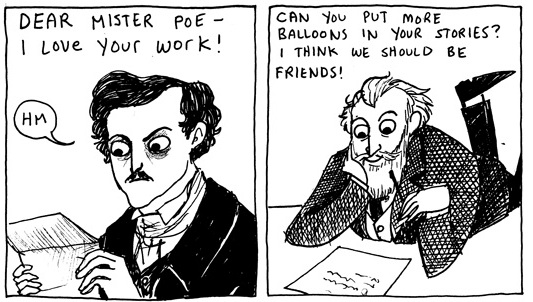 Her web comic started as a LiveJournal page in 2007 and didn't officially get a name until 2009, by which point Beaton had already published a collection called Never Learn Anything From History. It's a testament to the powers of the internet that, despite the book not featuring any new material, comic publisher TopatoCo sold out of its first print run in less than two days. Beaton now has nearly 35,000 Twitter followers, and her work has been featured in Harper's and the New Yorker. (She was even an untimely-Michael-Jackson-death away from having a comic about Canadian history grace the cover of the National Post in 2009.) Beaton also won this year's prestigious Harvey Award for Best Online Comics Work.

"On my website I can put up whatever I like, and no one can say anything about it, which is amazing," she says of submitting to the New Yorker. "But a part of me wanted that challenge, too, of trying to get published in a place that wasn't guaranteed."

Beaton's web comics translate well to print, in part because she doesn't explore the technological possibilities of the medium with the wide-eyed abandon of some of her peers. Hark! A Vagrant eschews animation and alt texts—short texts related to a comic that appear when you let your cursor hover over it. Beaton's comics often employ simple, black-and-white line drawings and are often only three panels long. "I don't think there is much difference between a lot of web and print at this point," Beaton says. "It's just a way for people to read."

Beaton's new book gives a sense of a child caught up in her own world, excitedly grabbing things she's found and showing them to the reader. Though history comics form the bulk of her work, she's equally interested in literature; Jane Austen's characters pop up with surprising regularity, and are treated no differently than real-life Victorians. Beaton doesn't shy away from contemporary pop culture either; Top Gun, The Tudors and Wonder Woman, among others, have all been filtered through Beaton's lens. "Comics are a great educational device in their own way," Beaton allows, "and it isn't that I want to educate people, but I do want to promote and celebrate this thing that I really cherish."

In a medium where the bulk of her peers work exclusively with characters of their own creation, Beaton has won an audience cribbing almost all her characters from the public library. She has a tendency to mash up historically disparate elements: she'll set a twenty-first century sensibility against a decidedly old-school backdrop, step back and let the magic happen.

Perhaps nowhere is this more apropos than in her comics about H Company—a WWII battalion composed solely of hipsters, more interested in ironic retro headgear and drinking coffee than combating the Nazis. "H Company has only liberated the cafés," their commander reports back. Even if you're an unofficial member of said battalion, it's hard not to laugh; there's a characteristic Beatonian tenderness to the bite.

Before narrowing her comics' focus, Beaton was a recurring character in her own strips, often accompanied by a younger version of herself. The dialogue between the two Kates was a thing of beauty; they had a Calvin-and-Hobbes dynamic, further complicated by entirely unexplained time travel. It enabled Beaton to be self-analytic without being self-centred, playing the straight man to her younger self's madcap energy and revealing the roots of her historical fixations. In one of these strips, younger Kate visits her older self at her job in a maritime museum.

"Do you have any books on pirates?" young Kate pesters Kate the elder.

"Pirates?" says older Kate, handing her younger self a book. "Yeah, probably too many. Here's one for you."

"I know about Blackbeard!" shouts younger Kate, her eyes widening with excitement.

"Yesss. He used to put his beard on fire to be even way scarier!"

Kate Beaton launches Hark! A Vagrant in Montreal on Nov. 1 at 7 pm, at the Drawn & Quarterly bookstore (211 Bernard St. West).