This week, Kathy Dobson will return to the place where she grew up, Montreal's Point St. Charles, to launch her memoir With a Closed Fist: Growing up in Canada's Toughest Neighbourhood. "There's tons of family still there, and they've all been contacting me and they're excited," said Dobson recently, speaking from her home in Waterloo, Ontario. She paused. "And they're going to die when they read the book. I don't think they understand that it's not a celebration of the Point—it's an exposé on poverty."

The book describes a late-'60s childhood in what was then a depressed, linguistically divided area, where Irish Canadian kids did battle with "Peppers"—a slur meaning "francophones"—and Dobson hopped from one overcrowded apartment to another with her mother and sisters. Dobson's coming-of-age is at the centre of the book, but she also shares the story of her mother's fight for social resources for the neglected community.

It's not easy to represent the experience of being a kid without sounding sentimental or preachy, and Dobson, a freelance journalist, said she was well aware of the possible pitfalls when she began. After months of research—and with the help of the journals she's kept since she was twelve—Dobson decided to write her memoir in the voice of her teenage self.

The result is distinct and effective, drawing the reader right into Dobson's tumultuous childhood. It also allows Dobson to tell her story without too much interference from her grown-up self. "If I wrote it from this perspective, as an adult—which is what I originally thought I was going to do—then there would have been editorializing or some judgment," she said. "I didn't want to judge it. I just wanted to tell the story, and let the reader judge it." (Not all reviewers have understood the tactic: the Montreal Gazette's Peggy Curran, appalled by the closemindedness of the people featured in With a Closed Fist, wrote that Dobson "never appeared to have reached a different conclusion, even when she's old enough to have opinions of her own.") 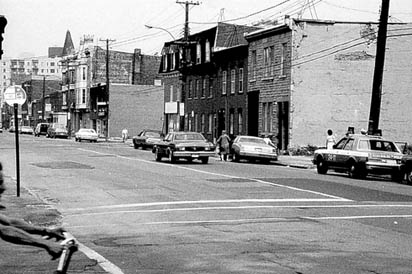 A street in Point St. Charles, circa the late '70s.

The book does paint a grim picture of life in the Point, which is located in the southwest of Montreal: men are violent or absent; apartments are mouldering; Dobson and her sisters never have enough to eat. "There's a really ugly side to poverty that we don't talk about," Dobson said. "I mean, you don't want people to know you couldn't wipe your ass with toilet paper because you didn't have it when you were a kid, or that you didn't have socks or you didn't have underwear or you lived your life a certain way. And that's where all the shame comes from. You had this secret internal life. Other people, if they weren't aware of [it], might be judging you based on things they had no clue about."

To hear Dobson tell it, it was especially hard to grow up female. The book describes rampant spousal and sexual abuse in her extended family and on the street. Meanwhile, her own father wandered in and out while her mother sustained the family. "On the hierarchy of people of power in the Point, believe me, women and young women, and then girl-women, [were] at the bottom of that totem pole for sure," Dobson explained.

Dobson eventually attended the University of Waterloo and went on to earn certificates in social work. As a writer and occasional CBC Radio contributor, she is still open to discussing the issues that surround poverty and recognizes those issues' complexity. Point St. Charles has changed since the 1960s; it, like many other areas close to Montreal's Lachine Canal, has experienced the slow creep of gentrification. Dobson said she was looking forward to seeing the changes for herself during her visit, and expressed concern for lower-income families still living in the Point—although, she pointed out, a mixed-income neighbourhood could provide positive role models for kids growing up there.

She still expected some of the old Point to come out for the book launch, however. It will be held at St. Columba House, a Christian community centre where Dobson and her sisters were once enrolled in the lunch program. "I was saying to my husband, if it wasn't my launch I'd be [covering] it for the CBC because there's going to be so many interesting people—couple of guys from the Irish mob," Dobson said. "I don't know if they'll stand out to an outsider, but some of them have been emailing me, and in my head I'm laughing, thinking, 'I'm going to be straddling two worlds. It's going to be so weird.'"

Kathy Dobson launches her book With a Closed Fist: Growing up in Canada's Toughest Neighbourhood (Véhicule Press) in Montreal at St. Columba House (2365 Grand Trunk) on November 4 at 5:30 pm.

—Another Montreal: Special Tours for the Indifferent Traveller
—How to Bike Around Montreal in 1897
—Drawn and Quartered