I've known Éric McComber almost fifteen years. We met in a bar when he was dating a friend of mine. For a while we'd just bump into each other periodically, like the time we ran into each other at a punk circus show I was stage-managing, and I accidentally made his girlfriend break up with him by calling her the name of his ex. I was all I've-heard-so-much-about-you enthusiastic, too. Éric wasn't so excited about me after that.

But we began writing seriously around the same time, him a couple years before me, and started showing each other our work. That's when we became real friends. I'm in constant admiration of his writing. He writes in a very North American French, using a precise, unsentimental mixture of highly literary French and Quebecois joual—a blend of cadence, vocabulary and slang particular to this province. Éric's sentences are so condensed that when I translate his work into English, my version is sometimes longer, which is rare in any French-to-English translation. Éric was a musician before he was a writer, and you can tell; there's real rhythm to his sentences.

Born in Montreal North, Éric held a hundred different jobs before Montreal's Triptyque published his first novel, Antarctique, in 2002. Since then, he has published short stories widely in both Quebec and France. In 2007, his novel Sans connaissance was published by Paris' Éditions Autrement. (None of his work has been published in English yet, but that should change soon.)

Melissa Bull: I read drafts of this book in 2005, maybe even earlier. Tell me about the process of writing La Solde. How long have you been working on it? Did you always conceive of it as a novel? If not, how did you turn it into one?

Éric McComber: I started working on this novel in 2002, almost in real time, as the material that inspired the stories was happening. I always saw it as a novel, but the release of Antarctique, my first book, brought a lot of requests for short stories from the main Quebec lit mags, and I tore some bits out that I felt fit their themes. The heart of the first half of La Solde was first published as a short story called "Usine," in 2002. I think you probably read the very first readable version, circa 2003.

MB: What does the title mean?

ÉM: It's a multi-layered title. It's the soldier's pay. It's what remains. It's a wholesale, a clear-out.

MB: Why did you choose to publish with La mèche?

ÉM: Everybody knows Geneviève Thibault is a firebrand, a thoroughbred of an editor and one of the best and clearest readers in the business. I was touring around Europe on a bicycle when she wrote to me, out of the blue. I had just arrived in Hamburg on my way back from the Black Sea. She made an offer. I was in right away. The editing relationship has been awesome. Geneviève's team pulled my work way up. 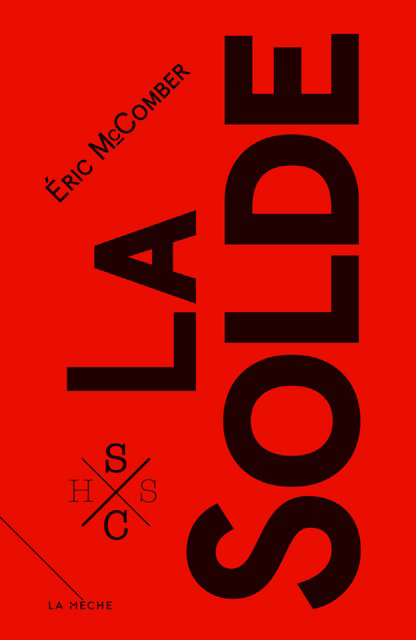 MB: How did you get this awesome orange for the cover?

ÉM: I like the colour of the book, which was obtained using three applications of a Pantone colour you can't get by CMYK process. It stands out in a pile.

MB: Tell me about the narrative interferences in La Solde: the calendar breaks, the pictures, the uplifting quotes, the line of encouragement on page 199—"ALMOST 200 PAGES! THAT'S ENOUGH! GO PLAY OUTSIDE!" What do these interruptions serve?

ÉM: I was introduced to playwright Bertolt Brecht in the eighties. I was in this theatre company and one year we performed "The Caucasian Chalk Circle." Brecht's principle of distanciation [critical distance] blew my mind. I've been an avid reader of his works ever since. It was something that La Solde needed. Not only does it give the reader some breathing space (the story gets pretty dreary), but it also forces the reader's mind to move inward/outward from time to time. It's a think-for-yourself mechanism.

MB: Sex. There's lots of it in this book, in all your books. Sometimes it's laugh-out-loud hilarious. Sometimes it's tragic, and it can make for an uncomfortable read. But it's more than that. There's snot and shit and blood. Why do you focus on viscera?

ÉM: Guts are where it's at. Skin, muscles, organs...I try to report on life as best I can. That means dipping my pen into shit, sometimes. Er...that came out funny.

MB: Is Émile Duncan your Nathan Zuckerman? Have you chosen the same name for your protagonist in each of your three novels?

ÉM: Yes, Émile Duncan is my Chinaski, although my first novel's character was called Étienne. I dunno, I guess Étienne is dead, though one of my next novels is set in a world that is closer to Étienne's. We've had some debates about that. I mean, Émile's surroundings are mostly ultra-realistic, while Étienne's environment really runs the gamut. I'll have to plan this carefully because Émile and Étienne do share some relationships. Maybe they'll have to meet someday. I could see them getting into a fight in some sticky alley.

MB: Who would win that fight?

ÉM: The one at the right point of drunkenness would win.

MB: How do your facts become your fiction?

ÉM: I come out of something wanting to take notes. A novel of mine is built around fifty or so moments. I write them all the way, then collect them, list them, choose the strongest plot points, etc. After that, there are long phases of cutting, boiling, re-cutting...

MB: In La Solde, you write, "Tango, pesto, porto, the Plateau loves its monotone pleasures." There's a clashing of high- and low-brow here. Émile, the protagonist, works in a factory, or is on welfare. Yet he's a writer, and talks in depth about history and Picasso to his eyeglass clerk, for instance. Do you think a lot about class? How does your awareness of class figure in your writing about it?

ÉM: Well, [my editor] Geneviève Thibault likes to call that class the intello-précaires ["precarious intellectuals"]. I think most of the bourgeois kids got out of the starting blocks alright. But a lot of clever bambini who should have been living quite challenging and exciting lives were quickly parked into worlds of crap. In a way, this book is about them. The American dream promised everyone an equal chance, and hard work was going to be the key. There's no such thing, of course. Les fils-de ["the sons of"] get all the open doors. For the rest of us, it's not just hard work; it's a war zone.

MB: There's a feeling of time just grinding and grinding without any significance in the book. There's a rotation of women and snowstorms and bars and food deliveries, but it's almost if they were all interchangeable elements. Is this despair? Is it just normal life?

ÉM: Émile is going crazy. Time starts to weave and shift, and sometimes a day passes between breakfast and coffee. Time is definitely one of the themes of La Solde.

MB: You write a lot about Montreal. You write a lot, and with a great deal of love, of rue Messier, a street you lived on along the Plateau's easternmost edge. Tell me about Messier.

ÉM: Montreal is my favourite city in the whole world. It's still the best, but I can't stand its rapid decline into a cocaine-sunglasses-latte apocalypse. That's one of the reasons I moved to Europe.

Messier was a special moment, a very special space. A hundred artists lived on two blocks over a five-year span. Jams in and across the street, parties, conversations, books being lent or thrown through windows, mad lesbian wall-climbing burglars, gold leaves in the fall and white car-engulfing slopes in winter, naked dancers up trees...

MB: You use a mixture of short sentences, colloquialisms, joual and highly educated French. You write out the sounds of things. What drives your language choices? Can you describe your linguistic aesthetic? What's at stake when you write like that in Quebec?

ÉM: It often has more to do with sound than meaning. A majority of old, obtuse bourgeois publishers in Quebec has been cauterizing street talk for a hundred years. They think it's the only way mama France will notice them. I think I've proven them wrong by publishing Sans connaissance with Autrement in Paris, complete with untouched dialogues in joual. The French reader is not only un-allergic to joual, but actually embraces "foreign" French more and more (their own literature being in a extreme state of morosity).

If people in Quebec find out about this, hundreds of young, dynamic, talented writers will storm the gates of the industry and the dusty kings of grants and subsidies will topple. That might sound paranoid.

Éric McComber will be at the Salon du livre de Montréal this weekend, at Place Bonaventure (800, de la Gauchetière St. West). It runs until November 20.