This week marks the launch of Contrivances, a debut collection of short stories from writer and art critic David Balzer. The e-book, published by Brian Joseph Davis and Emily Schultz's ECW imprint Joyland Books, relays the tragic comedy of women wrestling with muses and musings, from a blonde nudist retiring in the woods in "The Poncho" to the mannered heartbreak of "The Abortion." Because David is a very close friend of mine, we threw caution to the wind in favour of an intimate Facebook chat, with a few cultural touchstones included for good measure. Contrivances launches in Toronto on Friday, May 11 at the White House (277 Augusta) at 8 p.m., with an art exhibition from Margaux Williamson and Marzel Dzama and drag readings by Regina The Gentlelady and Sean O'Neill (among many others). Admission is $8 and includes a copy of Contrivances.

Chandler: Hey David! Is this a good time?

David: Here I am!

Chandler: First I'd like to talk about your story "The Poncho," which I found to be incredibly evocative and strange. I feel like Stevie Nicks definitely wears a poncho.

Chandler plays the video for "Gypsy" by Fleetwood Mac.

David: Well, Stevie is a strong presence in this book. My story "Purple Blossoms, Lost and Found" is a Fleetwood Mac allegory. "The Poncho" was specifically inspired by a story about Joni Mitchell, when she escaped LA after the recording of Blue and recharged in BC. It's also based on a lot of psychedelic folk by "hippie goddesses" that I was listening to at the time.

But in response to Stevie, I've always been fascinated with how Stevie Nicks, like, "muses" herself. I call her "the articulate muse." She sees herself as both object and subject in this completely unproblematic and fascinating way.

Chandler: That's an interesting idea—especially since all the characters in your book conceive of themselves as artists. Can you be your own muse?

David: I think you can be your muse but it's not something a lot of people can pull off. People who successfully become their own muse transcend mortality in a way.

Chandler: The character in your first story, "Patricia," seems to think that if she can find the perfect look, she can, like, complete herself.

David: Wow, that's an interesting interpretation of that story. I see that story as kind of being about how aesthetics are beyond our control. They can be controlled, but also not. There is an analogy to romantic love. Sometimes you find yourself being pulled back and forth by the waves.

Chandler: Obviously you deal with aesthetics in a critical, more categorical fashion in your writing for Canadian Art. But I feel like Janet Werner's work is like an aesthetic soulmate to Contrivances.

Chandler sends David the link to the painting "Summertime Rabbit" by Janet Werner. 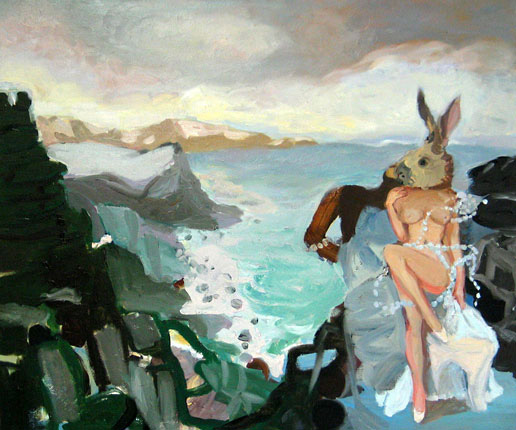 Janet Werner, Rabbit on the Rocks 2006–0. Image via Canadian Art.

Chandler: I know! I just googled it. How can a painting guide a novel?

David: I write very visually, actually. I use a sketchpad. When I have a scene where a lot of characters are talking to each other, I draw them and position them. I like to get a sense of how the human eye works.

You can extend your imagination when you draw certain details of décor. In the scene in "Smearcase" where all the characters are lunching together, I drew that out: where they were sitting, how they were looking at each other. For "The Correspondents," I drew a plan of the apartment building. For "Purple Blossoms," I drew the hotel, and where Mabel and Alice lived, in relation to the factory. But with other art, Peter Doig was an influence on "The Poncho."

Art is all over this book! "Laura" is basically a parody of the art world.

Chandler: The art world is obviously rife for satire, but the relationship between these two women in "Laura"... suddenly it becomes about looking.

David: It makes me happy that you think that.

Chandler: I guess with literature and art, it's all about developing your eye.

David: Yes, it's like—is it "good" or "bad" to look? And can moral qualifiers be placed around how that takes place?

Chandler: What do you mean by "moral qualifiers?"

David: Like, can you look at something with evil, with contempt? If so, what is that like?

Chandler: Women do that all that time.

David: Ha. Can you see outside of your own experience? What is our capacity for vicariousness with respect to seeing?

Chandler: Well, there's this whole conception of artists, with everything you see, as being grist for the mill. Do you struggle with that, or are your characters drawn as like, hermetic, aesthetic entities?

Chandler plays the video for Madonna's "Live To Tell."

David: One of my favourite songs! It will be hard to concentrate. But let me tell you: when I began to write this book, I was definitely reacting against the "write what you know" dictum. I wanted to write what I knew in terms of taste and style. So basically what began to happen is that I would dream up these scenarios that were willfully fictive. But then I thought, what would happen if I took these seriously?

What happens when you try to engage in sheer invention is that small, teeny-tiny elements of your momentary life creep in. Meaning that at the time during which you write the story, little mannerisms of people, things in the news, things you see walking around, on your bike, these are the things that enter the story. So what occurs is minutiae, but as well, you sublimate.

Chandler: What do you think you were sublimating?

David: Like, my mother is all over these stories—how she is in the world, what she's taught me. But also, her aesthetics. I really identify with female characters. I wanted to write a collection of stories that concerned women. It didn't seem contrived at the time.

Chandler: To write from a woman's perspective?

David: Yes, I do believe that writing should be a performance. You should get a little lost.

David: Well this film is fantastic. I'm getting chills. A huge influence on the book. Both this, and the Ingrid Bergman original.

Chandler: I haven't seen it, but it looks fantastic.

David: Now here is a tale of morality and aesthetics! Joan Crawford is horribly disfigured but gets what she wants. She has a secret. She tries to transcend her past. You know, I genuinely identify with stories like these. Maybe it's my religious upbringing, I don't know.

Chandler: Well, I like this idea of cataloguing aesthetics, all the things you find beautiful, into one piece of art. That you can produce a work that represents all of your tastes.

David: In that way, this is such a first book. I was kind of doing what Patti Smith talks about in Just Kids, working through that impulse to create through my taste.

Chandler sends David the link to the Wikipedia page of Nathaniel Hawthorne.

David: Hawthorne is an idol. I love that he wrote so few works. And that his writing evinces such labour.

Chandler: I like how meticulous your writing is. I feel like you are very deliberate about crafting your sentences and choosing your words, like in your art criticism! I really respect that precision, because I think that I'm totally the opposite.

David: Lately I've been really into writers like Shakespeare and Gerard Manley Hopkins, who basically invent a language for themselves. I wanted all the characters in this book to speak in my voice. I am not interested in vernacular. The thing is, everything is contrived. I think being openly contrived is actually more honest.

Chandler: It's a brilliant title. What are the contrivances in your character's lives?

David: Well, I liked the idea of a contrivance as a plot, a scheme. This book is full of scheming people. On one hand, the contrivance is the art they endeavor to make. And on the other, it's these social schemes they become engaged with. Art-making is an allegory for how we place ourselves in the world... to put it bluntly.

Chandler: Sure, of course. I mean other people would obviously disagree with you. Like a Marxist, or whatever. But I guess it's part of how you position yourself to other people.

David: I'm talking about the bourgeois! That's who I'm interested in.

Chandler: I think it's a pretty fair statement to say that a person's politics can be found in what they find beautiful. Like the UHB!

Chandler sends a link to a clip from Whit Stillman's Metropolitan.

David: Ha, awesome. I like the idea of narrative fiction as being, like, this painting come to life. You know, a "Night at the Museum." All of a sudden all these figures turn around and begin talking to you and interacting with each other.