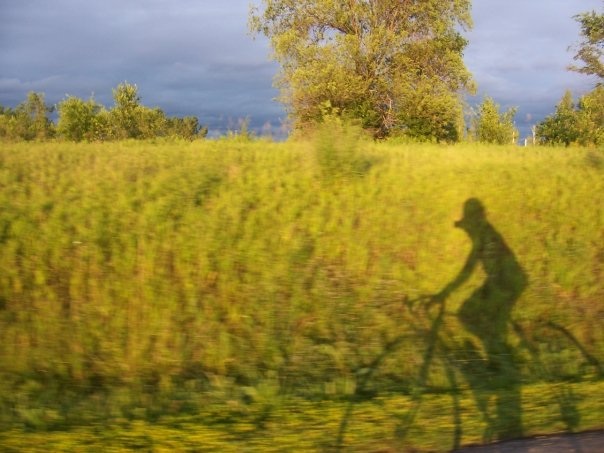 Hello; my name is Kelly. I’m from New Jersey and from Canada at the same time. I studied history and political science at McGill University in Montreal and, not too long ago, finally graduated. I recently moved from Montreal back to my parents’ house outside NYC. And now I am bored.

But, in French it’s said “je m’ennuie” — “I bore myself.” So I will take responsibility.

It’s been hard to find a routine since I’ve gotten back. Even switching back to East Coast time was tough; all those kitchy alarm clocks I picked up around Montreal are still packed away (that city is brilliant for secondhand junk compared to the West Coast; things just aren’t as old over there), and, after the constant motion of the past month’s travels, my return to a stale, tired home and to a lack of defined objectives are making me lose my edge pretty quick. At least when I was on the West Coast I was exploring, talking to new people, feeling out new places; it was a nice affirmation of what I want to continue doing with my life. If I don’t keep an engaged and motivated attitude here I will surely sink away, into parents’ basement, into television shows, into my head. True, I’ve caught up on Seth Rogan movies, and even found myself watching Waking Life on IFC while eating my Shredded Wheat yesterday morning. But Rogan’s movies kind of suck, especially Pineapple Express. And Waking Life might be more trouble than it’s worth; I wrote up a bunch of useless Post-It notes (”it’s bad enough to sell your waking life for minimum wage, but then they get your dreams for free?”; D.H. Lawrence wrote of the possibility of strangers, upon crossing each other in the street, “accepting the confrontation between their souls;” etc), and had strange anxieties about dreaming instead of actually falling asleep last night. Oh dear.

I have to forgive myself and just get on with it though. It’s easy to get fooled because I’m back in familiar territory, but the upset– I’ve just MOVED– is still there. Money isn’t too tight yet, but it will be if I don’t increase the freelance projects or get a job fast. Soon I’ll have to start paying rent in my parents’ house anyway, so if I wait, I’m fucked. Obviously the time for serious self-motivation is here. But, if I’m allowed, it is also the first September of my entire real life that I haven’t been in school. And September, I don’t know if you’ve noticed, is actually a very nice month.

Last night I went to the city for the first time since August. It was a fun time, meeting up for food with Jack and Angel from Montreal, and then hanging up at Market Hotel and later at a spiffed-up “jungle” party in some plant nursery in Williamsburg — ratty pine trees and bamboo in barrels, a shitty gravel ground covering, one outhouse for the hundreds of people, some with nice heels on. It was a good time if you could commit to shaking it on the dance floor.

Anyway, since I crashed at friends’ in Jersey City and we woke up so late, I had a pretty non-functional day today. But on my walk home from the train station I ran into our postman Bill. Bill wears rolled-up white socks with black sneakers when he delivers the mail. “What you doing girl!” he shouted at me. (He shouts because of the iPod.) “You home for good now?”

“For a late breakfast,” I joked, on account of the lateness in the day. Catching on again, I told him – yes, I’d moved home for good. “And how’s bro?” I told him: still at school, my sister too. “What you gonna do now? Got a gig lined up?”

With a smile and a bit of pride, I told him to look out for the Maisonneuve magazine he’d be delivering this week. It has a feature of mine in there, on the Quartier des spectacles and the reverberations of this new “cultural revitalization” development in Montreal.

“Sounds great!” he shouted with a smile.

(Please go buy a copy of Maisonneuve, found at most major Canadian newsstands (Multimag, Chapters, all around Montreal). Or buy a lovely subscription and check it out online. Also in that issue is Sarah Colgrove on the infamous Charles Ponzi and his Montreal beginnings.)

There are other things brewing, which I’ll reveal here as a matter of being accountable to them. Soon will be another addition of my Bike Travels installment for On Two Wheels. I wrote about biking in D.C. a couple weeks ago, and hopefully tomorrow will be San Francisco. Also on the map is Portland, Olympia, Victoria, and Vancouver, in some combination.

Drew, the self-serving cheap-labor mongerer/associate editor at Maisonneuve, has also convinced me to write a blog for them. It’ll be about myself I guess, my trials and tribulations in navigating the journalism world during a “watershed” “worst recession ever” “your newspaper is doomed” era in the New York writing scene. Maybe I’ll use this blog as a starting point. But, as you can tell, I don’t have much to write about yet.

There will be more assignments to come from Montréal en santé as well, which I’m looking forward to hearing about. But that’s all in the family of old-Montreal journalism contacts. Ain’t nothing new there.

Things I would like to write about around here: the Graydon Pool fiasco — I couldn’t help but bring my tape recorder and take notes at a recent highly-contentious council meeting about the future of my town’s pool. I’m serious, it’s the most interesting thing happening here. More-perfect-world ideas include: taking a look at the development of communal living in cities; a pitch (maybe eventually to my lovely crushes at Mother Jones, whose internship I feel irrevocably drawn toward) about what migrants’ rights activists have to say about health care developments (my question: what would a borderless health care policy look like?); and, maybe for the Record, a feature about bike infrastructure in Bergen County – likely about the disconnect between the towns and the counties, since very little will get done until the county roads get more attention. I also have some reporting left over regarding a story about barters and trades which I ought to get into the oven soon.