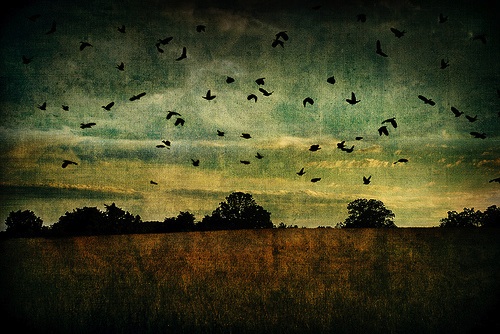 Everyone loves birds, or thinks they do. They just haven't looked closely enough. The reality of birds is that they fly around above our heads making high-pitched noises and defecating. In fact, birds do a lot of horrible things. For one, they eat insects. Insects are both disgusting and terrifying. They look like creatures from the nightmares of the damned. Now, think of the bird's terrible sharpened bone face. Then think of them thrusting their beaks into the moist earth to slurp up some pulpy white larva or crunch some spindle-limbed pygmy alien. Awful.

Another appalling thing about birds is the way they move their heads around their bodies. Imagine if you tapped someone on the shoulder and instead of turning around they squirted their head forward and looked at you upside down from underneath their armpit. Why is it better if it's a bird? Or imagine if you were at the park and you noticed a young mother sitting on a bench, holding her baby in her arms. Then she vomits on her baby's face. Would it be alright if she had wings? What if she had claws for feet?

A lot of people seem to think that birds are pretty great because they can fly. But what's so amazing about that? They have wings! Obviously they can fly. Flying squirrels are cool. Flying fish are cool. Flying birds are normal. Sure, sometimes they have bright colors, but that's just for sex. It's like, "Look at that bird, it's all tricked out." Finally, let's not forget their dead eyes. Birds have the souls of lobsters. No, there's really not much that's good about birds. Except their nests. Nests are neat.

(From What Comes to Mind)