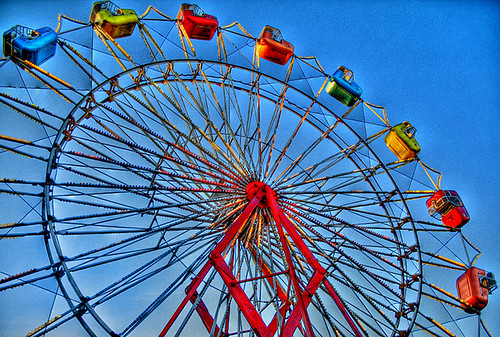 The fair. The Fall fair. Always Thanksgiving weekend, always a big deal in this town, multiple askings from patients Are you going? and my wide smiled Of course and Thursday is Toonie Night, Thursday is the day I can take my daughter and let her ride everything she wants to, the rides are usually five dollars a pop and so the economics make sense, I explain to my wife that we’re actually saving money by doing this now, and the magic of Toonie Night is that it almost convinces her.

We scoped out the rides before we committed. Some were Do Twices, some Do Onces, some Skip. We calculated that we’d need seven tickets, finishing up on the Ferris Wheel which my stomach permits me to ride. On the rest she’d go solo.

We started out on the Avalanche. A few high school girls, bottle blondes, chatted with the smoking carny. Whatever they said, it worked. My daughter rode on that ride for a full five minutes, the carny lasciviously smiling up at the girls and the girls waving at him. The girls would pay attention to him just enough to get him to commit to another series of revolutions, and then they’d laugh and talk to themselves until the ride slowed again and he needed another hit.

First Patient Sighting: a young man trying to win something for his toddler, the former previously on a disability pension for a bad back but somehow coming alive and shrugging that off, losing over fifty pounds and now a “ground man” for an electric company, he told me a month ago that he was recently assessed in a performance review as “the best ground guy that they’ve ever seen” and I wanted him to win, him standing there in his muscle shirt and newfound muscles, his son on his arm and he taking careful aim.

We moved on to the Gravitron, a sure vomit inducer for me, and my girl got a shorter ride than the hormone-fuelled Avalanche, but still long considering the usual duration, and she came out disoriented and happy. I quickly deduced that the rides on Toonie Night are supposed to be long: on the proper fair days there is a clamouring crowd, the carnys have to move the meat, but the evening tonight was bare, the rides ran half to a quarter full, and nobody cared.

Second patient sighting: a woman whose name I couldn’t recall, and so I avoided her, but I knew she was here with her kids, unseen little monsters, she was beautiful, a grown-up version of those bottle blondes, rim glasses and curly hair, I see her seldom for colds gone awry and for the stress of taking care of her elderly mother who is losing her mind, My mother is losing her mind she says in my office and smiles, a smile of the damned, the smile is one a futility: the old age home is not far off.

We moved to The Polar Express. This ride is the one my daughter remembered from last year. When I asked her on the drive over which ride was her favourite from experience she recalled this one, replete with a dj who spun music and who said This ride is electronic and supersonic and Get on the express it’s the bessssst and Get on the ride and collide baby we’ll just let it ride like he was a clanging reject from the FM station 102.1 The Edge. He also madly pressed the horn button. When describing this ride to me in the drive over, she called Mr. Arms and legs in tight boys and girls we’re going for a whirl as the “host.” The host had a thick moustache and pilot sunglasses. This was fun enough to do again, so she went twice. The host’s script was the same.

Next was Medieval, a lame scary ride, one you sit on and slowly rotate around a set of exhibits twice. It seemed like my speed, so I went with my daughter. We laughed at the pathetic attempt to induce fear, only cringing when a loud buzzer went off, not because we didn’t expect it (it sounded regularly, we knew it was coming) but because it was so deafening. A waste of two tickets.

Third patient sighting: a family, mom and pop and two kids, he working in a car factory, miraculously retaining his job. She’s a bus driver, recounting a story in which a delinquent scribbled over the back of a seat with purple crayon, and her making the kid clean it up before anyone could get off the bus. Their son with a heart murmur and regular cardiology appointments where Mom hears We can just watch this and a little girl all done up in pink, trying out a new snowsuit, a little girl that runs up to the rides and tries to get on and the father laughing, scooping her up and taking her down. The little girl has asthma, the patients smoke, but no one smokes more than the carnys: they light one once the ride is set in motion, and stop the ride when their cigarette is done. Unless they have the hots for the locals.

Next was Round Trip, a spinning ride that inclined almost ninety degrees. At this point I indulged my daughter with extra tickets, she was allowed a bonus ride, and at first she didn’t want to go because she thought it would preclude a Ferris Wheel ride, but I told her we would buy more tickets and she ran up the steps, knowing that this was the very ride that I vomited on over thirty years ago, the ride I streamed vomit over a full ride of faces just as the ride was at its steepest incline, and she laughed and laughed when she heard.

Fourth patient sighting: a family, him a hypochondriac with a record of ten complaints a visit, she a nice woman who is overprotective of her child, and the little girl of six, a tooth missing and confessing that the tooth fairy gave her a toonie, and the mom shaking her head and saying that when she was a kid the tooth fairy only gave out quarters, and me admitting that I was of this vintage as well, and the little girl saying that she was going to spend her Toonie on Medieval.

I let my daughter pick a prize booth, she wanted to throw darts at balloons but didn’t like the prizes offered. Other booths had guns that shot water or pellets but she doesn’t like guns. Yet there was one booth with large plush horses and actual saddles as prizes, and she wanted to go there, so I paid for her to play and she didn’t get a single ball in the basket, the balls were rubber and primed to bounce out. After all she’s only nine and thought just aiming the ball in was enough, easy pickings for the smoking carny. I swelled with Daddiness and tried to get her the horse but all my balls bounced out too and it was a prize every time, my daughter picked a small mauve alligator that she named Olive and also picked out a red dog with a big nose that she’d decided she’d give to her little brother.

Fifth patient sighting: a middle-aged woman with a young girl, the child will never let me look in her throat, the child giggles I can’t and the kid is nine years old, she twists her head and won’t let me look, and I admit to getting a little angry and refusing to prescribe antibiotics until I can see, and the mom wheedles to the child, and the child opens her mouth a fraction, and I say I still cannot see, and the child looks to her mother and I shake my head and it has ended with me not prescribing anything.

We move to the Ferris Wheel after I buy two more tickets. The wheel stops with us at the top, and I tell my daughter a story about one of my friends, someone she doesn’t know, who would bribe the carnys to rig the games so that he would be able to “win” his kids big prizes, superlong snakes and supertall dragons, and my daughter seemed shocked by this. Perhaps I should have tried it before I ruined it for her. We decided to call her mother, I let her use the cell and the first thing she said is We’re on the Ferris Wheel and then she said she won an alligator she named Olive and that she had a red dog for Kaz, but that she hadn’t named the dog and that the name of the dog would be the first thing Kaz says when he sees the dog, even if the sound is MMMnnnaa or EEEeee. I looked out at the fairgrounds, small figures were preparing the field for the tractor pull tomorrow, important village folk were driving around in their trucks and inclining their pinheads into walkie talkies, and the carnies were exhaling big puffs of smoke. It started to rain lightly.

As we drove home, she clutched the elegant alligator to her chest, admitting that she had fun, that elusive Thank you and I passed the dozen businesses whose proprietors I knew, had as patients, their lights turned down.