One of the many perfect moments in The Big Lebowski is when Walter Sobchak (John Goodman), upon learning that the next round of the bowling tournament is to be held on a Saturday, protests that he doesn’t “roll on Shabbos.”

The comedic premise of the scene rests on the incongruity of Walter’s gun-toting, Vietnam vet, formerly Polish Catholic character being a Sabbath observant Jew, but its brilliance goes deeper than that. The real edge comes from the fact that Walter’s Jewish lingo – here and throughout the movie – is entirely idiomatic. Walter Sobchak isn’t just pretending to be frum. As bizarre as it is (and visits to the non-kosher In-N-Out Burger notwithstanding), he is the real deal. 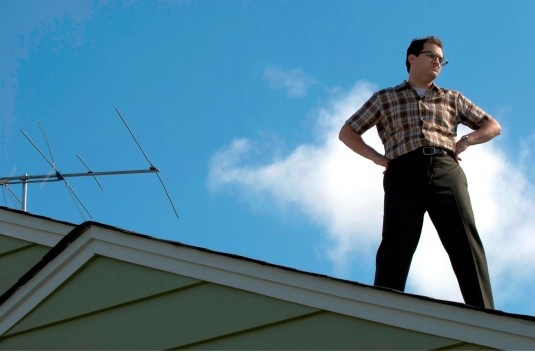 In The Big Lebowski this tidbit of insider Jewishness is icing on an already rich and sumptuous cake. In Joel and Ethan Coen’s latest film, A Serious Man, it is the cake, the icing, and the pan that it’s baked in.

The story is about Larry Gopnik (Michael Stuhlbarg), a physics professor living in a Midwestern suburb in the late 1960s, a setting reminiscent of the Coens’ own upbringing in St. Louis Park, Minnesota. It takes no time at all for Larry’s life to start falling apart. His wife Judith (Sari Lennick) announces that she is leaving him for another man, his mentally unstable brother Arthur (Richard Kind) has taken up residence on the couch, his finances are in disarray, his children are unruly, and his professional life is caught between an overly solicitous member of the tenure committee who’s been receiving anonymous letters impugning his moral character and a student who tries to plead, bribe, threaten and harass his way out of a failing grade. In his desperation, and at the urging of concerned friends, lawyers, and tune·in. a cool way to explore the media in your timeline. his wife’s paramour, Larry reaches out to a series of Rabbis, yielding plenty of frustration and no answers.

Clearly, it’s the perfect set-up for a bleak Coen Brothers comedy, and the film’s non-redemptive ending is as hopeless as any of their less humorous films. But a mere plot outline doesn’t begin to describe what this movie is about. Though Stuhlbarg does an admirable job portraying Larry’s barely restrained grief, his character is less of a tragic hero than a chronically passive foil for the rest of the cast; a “serious man” in a town full of nudniks that the Coens know, and love, all too well.

Despite the fact that Larry lives in an all-American suburb of green lawns and family bungalows, his social sphere is entirely Jewish. His lawyer is Jewish, his doctor is Jewish, his academic colleagues are Jewish, his wife’s new flame is very, very Jewish and needless to say, his Rabbis are Jewish. The flat suburban spaciousness, emphasized by a perfunctory birds-eye shot, is belied by the community’s closeness. After Larry’s son Danny’s bar mitzvah, his colleagues and acquaintances offer their congratulations without having to be informed of the occasion. The sense of Jewish solidarity is enforced from without, as well. One of the few non-Jewish characters in the movie is Larry’s next door neighbor, an archetypically taciturn, deer hunting gentile who haunts Larry’s nightmares the way taciturn, deer hunting gentiles have haunted Jewish nightmares ever since Jacob nearly got his ass and four wives handed to him by Esau.

In The Big Lebowski, the occasional Jewish notes were sprayed forth by Walter on inappropriate occasions and were played in sharp contrast to a totally unrelated plot and setting. Here, the minutiae of American Jewish culture are set within familiar forms of stereotype and kitsch. What the Coens realize is that making a comedy about a particular cultural group isn’t about avoiding cheap caricatures in favor of more detailed characters; it’s about taking the stereotypes and making them live, showing how they became stereotypes in the first place. Nearly every secondary character in A Serious Man accomplishes this, even, though perhaps indirectly, the non-Jewish neighbor. Indeed, if you happened to be in synagogue over the high holidays, you probably would have noticed many characters from the movie seated somewhere close by – perhaps even sharing your bench. Certainly, one or two would have been represented on the dais.

The most show-stealing of these second fiddles is Larry's romantic rival Sy Abelman (Fred Melamed), a mellifluously condescending community “character”, incarnated in a beard and baby blue golf outfit. Along with a generous side-order of unwanted physical affection, he has the gall to assure Larry that "we're going to be fine." Other familiar types are similarly ridiculed. The synagogue’s junior rabbi is a zealous young clergyman with an unbudging smile who raves about the divine beauty of the parking lot, while the second, more senior rabbi is an equally well-meaning fool, telling pointless stories in stentorian fashion before admitting that he can’t help Larry in any way whatsoever.

More important than any specific character, however, is the general sense of an insider community created by the all-Jewish milieu. With the vague feeling of airing dirty laundry, the Coens make free use of the word ‘goy,’ creating the impression of a mildly bigoted cliquishness. It is unlikely, however, that anyone will protest this exposure of past foibles. The Coens’ treatment of the Jewish community is ultimately a loving homage, reveling in its faults along with its virtues. As Pauline Kael once wrote, a minority group will gladly give up its insider knowingness in favour of the “excitement in hearing its own private thoughts expressed out loud and in seeing something of its own sensibility become part of our common culture.” For a Jewish audience, that is certainly the effect of this film.

Despite the fact that A Serious Man takes place during the high tide of 1960s hippiedom, the spirit of counter-cultural abandon is only lightly sprinkled on, mainly via the head-turning, nude-sunbathing woman next door, and the pot smoking tendencies of Danny and his Hebrew school buddies (the inherent teenage awkwardness of his bar mitzvah is multiplied ten-fold by a few pre-aliyah tokes in the men’s toilet). It is better represented, however, on the soundtrack. Danny listens incessantly to Jefferson Airplane’s “Somebody to Love,” and the senior rabbi’s rambling story about “the Goy’s teeth” is set perplexingly (but somehow, effectively) to Jimi Hendrix’s “Machine Gun.” Though the goings-on in the rest of the country or overseas are not the film’s focus, the music provides a bridge to the upsets that inevitably make themselves felt in this Jewish pocket of Middle America.

One song in the film, however, provides a bridge to a very different time and place. Leaning back in his living room, tired, depressed, and with only his cyst-ridden brother for company, Larry listens to what sounds like a sensuous German operatic aria. In reality it is “Dem Milners Trern,” a stirring number by the 19th century Yiddish songwriter Mark Warshawsky. The song evokes an earlier era of Jewish existence, more explicitly shown in the movie’s enigmatic prologue. The scene takes place somewhere deep in Fiddler on the Roof territory, and consists of a heated exchange between a husband, a wife, and their maybe-a-demon, maybe-not-a-demon aged and distinguished looking visitor. Though campy, the routine is not enacted in Borscht Belt, Yiddish-inflected and Yiddish-afflicted English, but in real, honest-to-goodness Yiddish, in all of its idiomatic glory.

The precise connection between this prologue and the rest of the film remains unclear, but it illustrates the Coens’ effective blend of exacting realism and utter farce, a mixture that gives their humor depth and incisiveness. The main elements of A Serious Man are probably universal, but universality is beside the point. What makes A Serious Man more than another send-up of suburban dystopia is its painstakingly detailed Jewish context. Yes, there’s a forest here, but it’s a forest distinguished by its trees. Sabbath observant, after all, is not quite the same thing as shomer Shabbos.