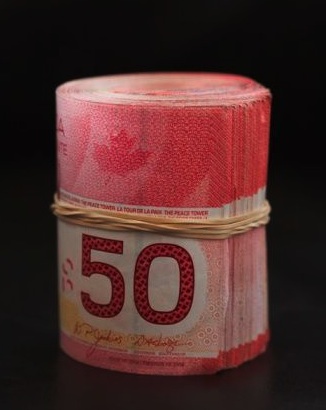 I started working at Luciano's cafe when I realised I really didn't want to work in a fishmonger, after all.  I had lasted exactly one and a half weeks, long enough for the pair of jeans I'd been wearing to work to become tainted with a second-hand marine odour.

I had never noticed the cafe before, even though it was only a couple minutes away from my apartment in Montreal's Little Italy.  There was a handwritten sign in the window: "serveuse cherchée."  I gave my resume to the ponytailed teenage girl behind the counter, one of about four people in the place; the rest were middle-aged men huddled around video lottery terminals way back, hiding from the natural light.

Sixty-something, mostly balding, round-headed and -stomached, Luciano did an interview with me that was more a test in listening comprehension than anything else.  I don't remember him asking me anything about workplace competency.  I only remember that he sat me down at his favourite table and mumbled at me something near indecipherable, for at least half an hour, in a dense and rambly Italianish French.

He told me would pay me $8 an hour, one dollar less than minimum wage, but that I would make it up in tips.  I was skeptical, but I was also jobless during a summer rapidly advancing, so I accepted the wage and the job and started the next day.

I'd worked in cafes before, but I'd never worked for Luciano; this is an important distinction to make.  One of the first things he showed me was how to bundle hundreds of dollars into dense little elasticated rolls.  The second thing he showed me was where to hide said rolls - one in the pot under the sink, one in the empty wine case in the storage closet, etc.

"You see those boys across the street?" he said, furrowing his brow and waving a meaty hand at the black kids outside the depanneur across the way.  "They're all in gangs."

Really, I said.  He narrowed his eyes and told me very seriously that one day while I was working, the cafe would probably be robbed.

The cafe got almost no business from non-regulars, and there weren't many regulars.  As such, the wads of cash were both culled from and necessary for the maintenance of the video lottery machines in the back.  There was no music at Luciano's; only the jangling, bubbling, sound effects that came everytime a gambler "pulled" the lever of the electronic slot machine, and the ding-ding-ding when it settled on a combination of graphicised cherries or King Tut heads or horseshoes.  I learned to listen for the noise the machines made when printing a receipt.  It meant someone had finally won something, and that was my cue to leap up and start counting out bills.

"This is how you count the money without putting it down," Luciano told me one day, showing me how to pinch the bills with my left thumb and flick through them with my right.  "You never put it down."

Luciano would force me to divide cash into two categories: belle and pas belle.  Customers must be paid in bills as free as possible from rips, tears and fold lines.  I was paid in cash, always pas belle.

"Ils sont tous les malades," Luciano said of the gambling addicts, although he himself nursed a resentful love for roulette and would often spend hours telling me how the people working at the casino cheated him.

"Oh, they're so polite, and they smile" — here Luciano stroked his cheeks with his thumb and forefinger, pulling down a disingenuous smile — "and they say, 'Oh, merci monsieur,' and they're very nice—but the minute you win, and you give them a tip...oh, the minute they've got that tip, they don't give a fuck."

He memorised the order of the numbers on a roulette wheel from a piece of cardboard he had numbered himself, asking me to call out a number so he could tell me the six that came after it.

"They say it's all luck," he said of the casino employees once.  "But oh, they've been doing it for years.  They know just how to throw it to make it land a certain way.  They know what they're doing."

Luciano went in and out sporadically during my shifts, sometimes taking a nap on a cot he kept in the back room, sometimes going to, presumably, play roulette.  Once a woman called for him, maybe his wife, and I told her I thought he had gone to the casino.  She said, "Hm," or "Oh, really?" and that was it.

The next day Luciano, glowering at me over the tops of his glasses, asked me sternly to never tell anyone where he had gone.

"Tell them you don't know where I went," he admonished me.  "Tell them I ran away!  Tell them I went to China!

"But please, Madeline, don't tell them I went to the casino."  He laughed a little.  "You're going to get me in trouble."