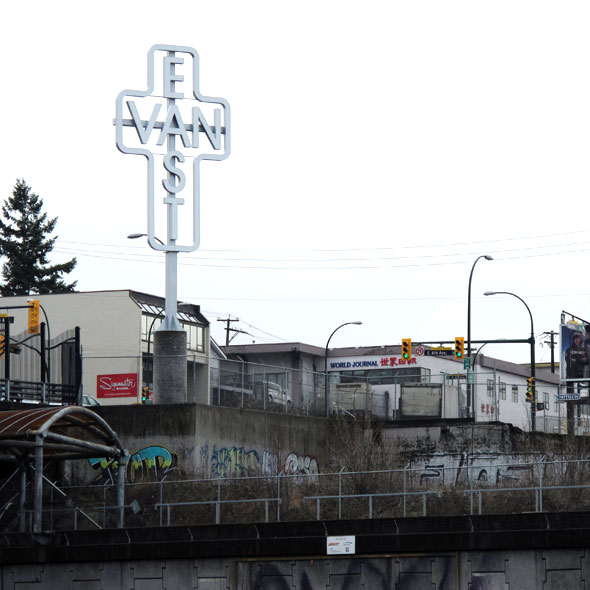 When I moved to Vancouver from Montreal six months ago, I didn’t give much thought to where in the city I wanted to live. I hardly knew Vancouver—what drew me out here were sea breezes and an anglo lit scene. All I cared about was not paying exorbitant rent or living somewhere gang-plagued and drug-ridden, two things Vancouver is most notorious for.

Serendipity by way of Craigslist found me an inexpensive ground floor suite in Mount Pleasant, a district of East Vancouver. When I moved in and began exploring, I found that the neighbourhood is aptly named: humble bungalows in bright colours; tire swings and verdant, unruly gardens; hand-painted signs imploring drivers to “Slow, mind the Children”; independent coffee shops and artist collectives; a convenience store run by Harry, a friendly Korean guy who learned my name. Basically, I found myself living in the West Coast equivalent of Notre-Dame-de-Grace, my home neighbourhood in Montreal.

It all changed when I watched Mount Pleasant, a Canadian-made feature starring Ben Ratner and Kelly Rowan about the neighbourhood’s seedy underbelly. In the film teenage prostitutes turn tricks for Westside businessmen at bus stops and drug addicts leave behind used syringes in sandboxes. My roommate confirmed that the movie is somewhat founded in truth. Mount Pleasant used to be rougher, and outbreaks of violence still occur. Last February a man was shot two blocks from my house, and just last month another local man was shot to death while driving in his car.

East Vancouver is not to be confused with the Downtown Eastside, a four-block enclave that is home to thousands of homeless. There it is not unusual to see someone shooting up in broad daylight. East Van (as it’s affectionately known) is completely distinct in geography and spirit. I feel a lot safer on East Van’s streets, even if I’m walking alone at night or waiting at the bus stop in front of the homeless shelter. Still, East Van is known as a working class neighbourhood—the landing pad for new immigrants and one of the last non-suburban bastions of cheap housing.

It stands in stark contrast to the tonier West side neighbourhoods of Shaughnessy, with its multi-million dollar mansions guarded by two-storey hedges and security cameras, and Kitsilano, where organic grocers and yoga studios abound. Even modest homes regularly sell for well over a million dollars and contribute to Vancouver’s reputation for astronomical housing prices.

I began to dig into the East Van ethos when, after coming home late one night on the skytrain, I saw a giant, brilliant white apparition through my beer-slurred eyes: the words EAST VAN arranged in a cross, sharing a common “A.” The cross stands fifty-five feet high at the corner of Clark and East Sixth, and its neon lights emit a clinical glow onto a non-descript, semi-industrial stretch of roadway. It faces west, serving as a cheeky, defiant welcome mat for an otherwise non-ostentatious part of town. 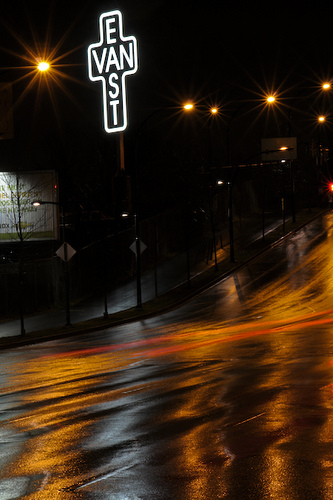 The sign has a long and colourful history, it turns out. Charles Demers, a local activist and comedian, and the author of Vancouver Special, remembers wannabe tough kids flaunting the cross in the eighties—scrawling it on school binders and knifing it into desks.

“Traditionally, the graffiti’d cross would be accompanied by one of two appendices 'East Van: Expect No Mercy' or 'East Van Rules,'" Demers says in an email. "The boomers who remember the graffiti usually remember the ‘expect no mercy’ version. By the time I came along it was almost always ‘East Van rules.’"

It was later appropriated by the East Van Saints, a ragtag gang of high school kids. Some even sported it as a tattoo. “The old gangs were more geographically defined, and more about street-fighting," Demers says. "Today’s gangs are more likely to be ethnically defined (though some are multi-ethnic), aren’t confined to single neighbourhoods, and have more than anything else to do with drug distribution, and fighting for a piece of an industry worth well over a billion dollars.”

Ken Lum, the cross’s designer and a well-known local artist, knows as little as anyone about its origins. “Nobody seems to know the origins of it. It’s been traced back to at least the forties. Some octogenarians remember seeing it.”

Until now, it had never been formalized, nor officially co-opted by any group. “PR branding hacks dream of inventing logos with half [its] power,” Demers says. “It appeared sporadically and unevenly but somehow it’s survived for decades. That’s what makes it so interesting,” Lum says.

Lum had been thinking of erecting the cross for several years. The perfect moment arose when the city put out a call for submissions for its city-wide public art program mounted for the Cultural Olympiad. He originally proposed placing it on Main Street, but bylaws forced him to find a new location. It eventually ended up at Clark and East Sixth, on the northern fringes of the neighbourhood. The cross has proved such a success that the city has decided to make it a permanent fixture on the skyline.

Lum thinks the city’s tradition of economic disparity contributed to the life of the sign. Some people have complained about its cruciform outline and the obvious Christian implications. “I think it’s interesting to borrow motifs of suffering and oppression—and I think those are the underlying themes that make the sign work,” he says.

The official boundary between East and West, where street suffixes change, is at Ontario Street, about a kilometer west of the cross. And while gentrification is pushing that boundary ever-eastward, the neighbourhood is still home to a vibrant and experimental creative scene—musicians and artists and fashion designers. East Van also boasts some of the best ethnic restaurants, from Ethiopian to Mexican to Italian and Indian. “I think it’s the heart and soul of the city,” Lum says, “but you never see it on a brochure.”