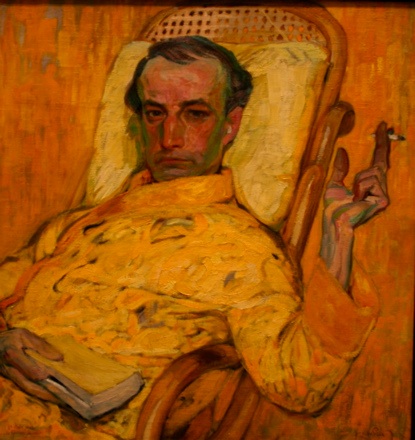 When I was a child I wrote a script for my life. It went like this: "Be nice and go to heaven." Then one day I saw an ad for Lucky Strike cigarettes in a magazine. It was simple, a picture of a man and a woman smoking on a fire escape. They weren't going to heaven. They were relaxing. That's when I knew that I wanted to relax too.

I had my first cigarette with my brother when I was sixteen. We smoked leaning against the trunk of my parents' Ford Taurus at a gas station in West Virginia. That was ten years ago. I love smoking. I've been told I'm good at it, a natural. It's not a technique, it's an attitude. You have to take the cigarette for granted. Treat it badly. You know you can't quit but you want to. It's got to be raw.

When I was eighteen I moved to Paris. Before I left, my dad said to me, "Whatever you do, don't come back a smoker." I smoked two packs a day the whole year I was there, I had skin like rotten curtains, but two days before I came back to Canada I quit. Then I started again two weeks later. I've quit smoking at least a dozen times since then. As an experienced smoker once said to me, it's easy to quit, it's just easier to start again.

To quit smoking is miserable. The only way to do it gracefully is to smoke for thirty years and then to stop cold turkey and never mention it again. (The cold turkey says it all, a sophisticated snack while out shooting foxes.) If you can't wait thirty years, keep a pack of cigarettes in your pocket when you quit. It will turn your eyes to granite. You'll wrestle buffalo. You'll eat airplanes. More likely, you will gorge yourself on junk food and hate all your friends for a week.

But no one should ever quit smoking. It makes everyone around you uneasy. As I said, I've quit smoking more times than I care to remember and it has never done me any good. I once made the mistake of quitting while I was working out west. There was a man there I respected, a foreman named Dave who looked like he was made out of mud and driftwood. When he found out I'd quit, he barked, "Either smoke or smoke, but don't not smoke." So I started again.

Nonsmokers always think they know all sorts of good reasons to quit smoking. "It makes you ugly." "It makes you smell bad." "It kills you." What they don't understand is that smoking is awesome. Nothing reasonable will contradict that fact. Honestly, the only good reason not to smoke is that teenagers smoke. Unfortunately, there's an equally good reason to keep smoking, which is to spite nonsmokers.

Sometimes when you think you're quitting you're only pretending, in which case you bum cigarettes from friends and strangers. The etiquette for bumming cigarettes is this: don't do it. You can't bum cigarettes. You think you can, and sometimes you do, but you can't. Bumming cigarettes is embarrassing for you and degrading for the real smokers who are forced to participate in the sadness and dishonesty of your life. Smoking is for smokers.

One of the glories of smoking is something a teacher of mine called the "smoking opportunity." Smoking opportunities aren't uncommon, but one has to seek them out or sometimes wait patiently for them to appear. During the course of a smoking opportunity, in which time one enjoys a cigarette and perhaps some quiet conversation, nothing else applies. Interior voices are softened. Responsibilities are dismissed. Roles are set aside. It's like taking a shower but without the hassle.

The secret of smoking is this: there are winners and losers in the world and smoking is for losers. Smoking is overtly suicidal and for that reason it is a great comfort to losers, because it is a way of keeping death on your team. If you smoke then whenever death appears it will be your old friend. Observe smoke curling in the sunlight: it is the shape of death. Cigarettes are the soothers of the afterlife.

Being a loser is important because losers are more honest. Winners enact their successes by realizing their fantasies, which is to say that they lie to themselves. Losers don't have to do anything like that. Winners have to be careful but losers can risk a little reality. They can renounce the insanity of being pure. Smokers don't go to heaven, but they do go up on the roof.