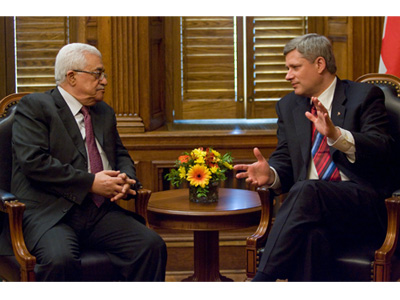 In a uniquely Canadian way—politely, subtly—the Conservative government has made a clear statement in support of Israel’s divide-and-conquer rule over the Palestinian Territories. By slashing funding to the United Nations Relief and Works Agency (UNRWA) and instead pumping money into the Palestinian Authority’s (PA) judicial sector—specifically toward training police, prosecutors and judges—Canada is playing politics with aid.

Canada is continuing its support for the UNRWA emergency fund this year, but is cutting funding for the UNRWA general program, which focuses on development and education. On the surface, it appears as though the Conservatives have simply redirected aid from an international organization that supports Palestinian refugees to a Palestinian-run body. However, scratch the surface and you find a brutal, Machiavellian reality.

UNRWA is the main aid and relief agency for Gaza’s 1.5 million locked-in residents, most of whom are refugees stemming from Israel’s creation in 1948. The organization advocates for those residents’ right to return to their homes—making the Conservative cuts one of the government’s most succinct reversals of Canadian foreign policy in the region. This effectively scraps Canada’s historic support for UN Resolution 194, which calls for the return of all Palestinian refugees to their pre-1948 homes.

Yet this is not simply an example of Stephen Harper’s diplomatic posturing for Israel. In an article subsequently reprinted in the Jerusalem Post, Treasury Board President Vic Toews told the Winnipeg Jewish Report that there was no cut in funding—just a reallocation to the PA judicial system, to bring aid in line with Canadian values.

Evidently, for the government, these values include funding a police force responsible for a two-and-a-half year campaign of political arrest and torture aimed at West Bank Palestinians involved in anti-occupation activities, primarily from the rival Hamas movement.

The redirected aid will bolster the West’s current project of strengthening the West Bank-based PA, headed by Mahmoud Abbas, despite the expiry of his administration’s term and his lack of popular legitimacy. The central aim of this pro-Abbas effort is security coordination with Israel and training PA security personnel, with American Lt.-Gen. Keith Dayton—a veteran of the US invasion of Iraq—leading the charge.

Canada has not only stopped its meager supply of butter to Gaza—to further internal Palestinian divisions, the Conservatives have turned aid into a gun.

I lived in Ramallah in 2007 and 2008, and have frequently returned since. I’ve seen firsthand the change in a city that has become the base of elite Palestinian rule, backed by Israel and Western governments. “All night I used to hear the screams of pain from the jail,” says a friend from Ramallah, who lived adjacent to a prison where political detainees were held.

Sitting with Wisam Ahmed, advocacy officer at Al Haq, in his downtown Ramallah office, he gives me a copy of the organization’s executive summary report on human rights violations by the PA in the West Bank and Hamas in Gaza. It is called “Torturing Each Other.”

Ahmed tells me that, although Al Haq has raised the PA police’s violent track record with larger international organizations, the campaign of torture and arrest continues. “I think there are various interests involved, and some of these third-party interests are different from what we feel are in the interest of ensuring Palestinian unity,” he says, referring to Israeli and American-led moves to isolate Hamas. “If the international community is not interested in talking to all the parties involved, then their main interest is going to be to keep people sidelined.”

In this conflict, Canada generally stays quiet and uses humanitarian assistance to rebuild what Israel destroys. Now, Canada’s most powerful foreign policy tool is being used to fuel a bloody Palestinian fracture.

This article originally appeared at the Daily Nuisance. Jesse Rosenfeld is the editor of the Daily Nuisance, an English news and analysis site based in the Middle East. Rosenfeld has also written for the Guardian, the National (UAE) and many Canadian publications.