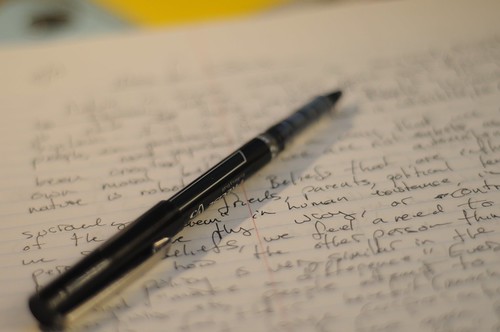 Her vocabulary was as bad as, like, whatever. -Unknown

The hailstones leaped from the pavement, just like maggots when you fry them in hot grease. -Gary F. Hevel, Silver Spring

Long separated by cruel fate, the star-crossed lovers raced across the grassy field toward each other like two freight trains, one having left Cleveland at 6:36 p.m. traveling at 55 mph, the other from Topeka at 4:19 p.m. at a speed of 35 mph. -Jennifer Hart, Arlington

The politician was gone but unnoticed, like the period after the Dr. on a Dr Pepper can. -Wayne Goode, Madison,AL

The thunder was ominous sounding, much like the sound of a thin sheet of metal being shaken backstage during the storm scene in a play.-Barbara Fetherolf, Alexandria

The red brick wall was the color of a brick-red Crayola crayon.-Unknown

He fell for her like his heart was a mob informant and she was the East River. -Brian Broadus, Charlottesville

Even in his last years, Grandpappy had a mind like a steel trap, only one that had been left out so long it had rusted shut. -Sandra Hull, Arlington

Shots rang out, as shots are wont to do. -Jerry Pannullo, Kensington

She had a deep, throaty, genuine laugh, like that sound a dog makes just before it throws up. -Susan Reese, Arlington

She walked into my office like a centipede with 98 missing legs. -Jonathan Paul, Garrett Park

It hurt the way your tongue hurts after you accidentally staple it to the wall. -Brian Broadus, Charlottesville