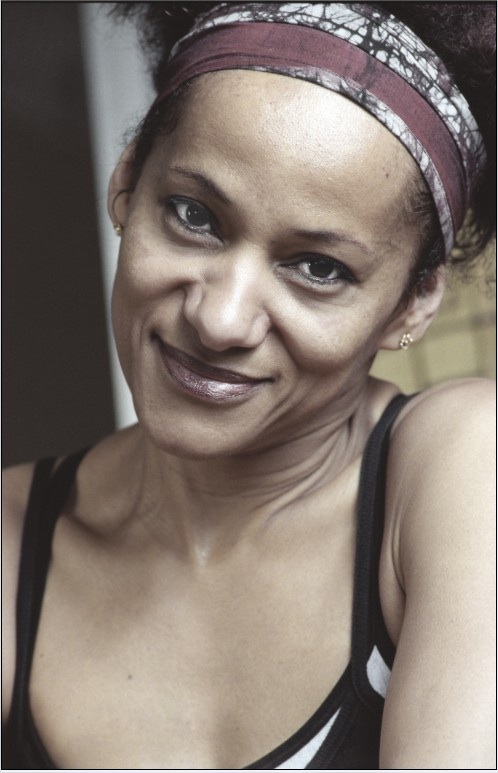 Zab Maboungou founded her contemporary African dance company, Cercle d'Expression Artistique Nyata Nyata, in Montréal in 1986. It was a time when African dance was situated firmly on the fringes of the contemporary dance scene. In the twenty-four years since, she has grown the company into a well-known and well-loved organization that’s housed in a large, two-storey loft space on Boulevard St. Laurent. A thoughtful philosopher as much as she is an expansive performer, Maboungou spoke with me in advance of the premiere of her latest work, Montréal by night.

Amelia Schonbek: You've really been a pioneer of the development of contemporary African dance in Canada. Can you talk a bit about conceptions of African dance and its place in the Canadian contemporary dance scene when you began to work here, in the mid-80s?

Zab Maboungou: When I arrived [African dance] was quite unknown, basically. I was told quite immediately that there was no place for me because the art of African dance just didn't mean anything, either for the public or the institutions. And really some people [were] just as straight as this. So I decided to just do it on my own as a true immigrant. You know, “don't wait, just do.” And you are actually in the studio that is the result of such a choice and decision. It was like, “we have to find a place where we can really evolve and start doing things. Otherwise we're just going to be like les itenerants,” you know, moving all over the place, not really having a base. So that's how it all started.

And then it took, what, I'd say ten or twelve years before I got a grant that would allow me to just research my material – the minimum. Before we started being taken as a serious contemporary dance company, it took even longer. And one of the reasons was that I was claiming to be a contemporary African dancer, but not based on the ideas that people had either of contemporary dance or of African dance. I told myself that if I couldn't come up with a method that would be able to really allow people to be trained in the way I thought they should be trained, I would still be stuck with the idea of the African tradition, and not be able to evolve from it.

I started training dancers and formed my own company and came up with a choreographic technique that is unique and expresses what I feel is important. It is a challenge, because it's basically telling people, “there is something you have to learn that you don't know. You think you know it because you have access, historically, to a certain kind of cultural material that you think you understand.” But historically, [conceptions of African dance] are very Eurocentric, and therefore unless you come from your own point of view there's no way things can evolve. That's what I've been trying to do.

AS: Have attitudes changed over the past twenty-five years that you’ve been working in Canada?

ZM: Today, when people interview me, there are no more exotic, stupid questions like "Oh, what do you do with the drums," and on and on. Still today when I perform people will ask me, "do you [choreograph] this, or is this improvised?" Even when you do something that's really structured, some people are convinced that it's totally improvised and that we just let ourselves go onstage, you know? So these are views that we still have to counteract.

There was a strong idea in my family of new African culture, culture that had to pay attention to what came before in order to embrace the future. This idea never left me. It gave me a strong idea of where you come from, that you never move forward without knowing and understanding and re-questioning where you come from. It makes me very aware of the fact that people invent culture. There is no essence that you are born with and so on. Yes, we do come from specific cultural surroundings, but [culture] moves, it transforms itself, it can be questioned, it can be reviewed. You can't just accept history as it's been given to you.

AS: It’s very common to ask contemporary choreographers who work with ethnic dance forms about location – about how place has influenced their work. Do you think it’s a valid question to keep asking?

ZM: Depending on how it is asked, sometimes it's valid and sometimes it's not so valid. Of course, when people move, they're influenced. Whatever we do, we're influenced by it. When it comes to contemporary dance - you have to expect that people are not only influenced by, but that they purposefully pay attention to other ways, other forms of moving.

AS: Would you say that place is an influence on your work in particular? If it isn’t, what is?

ZM: In my case, due not just to my own specific life but to my views on humanity and what we do in this world, I pay attention to a lot of various things and I am very sensitive to transformation and also to what stays, what doesn't get transformed. Mobility and immobility are what concerns me as a dancer, and I see it in cultures also. How various societies come up with various answers to their situation in the world, and how at the same time there are some things that are just human, that you find again and again. This is what dance addresses. Yes, of course, I see things and I sort of absorb them, and give them back, but not necessarily to prove I'm contemporary, because there are so many ways of understanding contemporaneity.

AS: Exactly. It’s problematic that most criticism tends to discuss contemporary ethnic dance mainly in the context of this idea of fusion, of how two different places, East and West, have shaped it.

ZM: It's a pain in the neck! It’s very frustrating. One issue is the thinking that to be an African basically means that when you do contemporary dance you mix African traditions with Western traditions and this is contemporary. No. Contemporaneity is not a mixture. It is how you perceive things from your point of view today, how you're able to truly face, consider, absorb these various issues and the ways of life you have. Your ability to understand and pay attention to things and see how they shape your views and how you're going to [respond]. It's more complex than we think, in that way. I'm not a menu because I'm half French and half Congolese. [I will not] regurgitate this [identity] in mixed form and have that be my contemporaneity. That would mean I'm basically bound to my métissage. [This view] is totally reductionist. It doesn't at all render my capacity to think and reflect on the human situation and how I can address it with dance.

AS: I read that you think of a piece of choreography as a "text" and of movement as a "poetics." Could you elaborate a bit on this way of thinking about movement?

ZM: I use the term poetics to put back the idea of aurality, of aural aesthetics based on sound and rhythms. Rhythms can articulate a thought, articulate a posture, articulate a gesture. There's nothing for me outside of rhythm. Rhythms are incredible; for me they're the way we stand in this world rather than fall. Again, it resists this very Western idea, "I don't have rhythm." Rhythms are like a language; this is the text for me. Let's not forget that [in the past] people have sent messages with rhythms, and that they can articulate, can call your name with a rhythm.

AS: Your teaching philosophy differs from many other ways of training dancers. Could you talk a bit about that?

ZM: I created a method to be able to teach people movement based on – I like to say – what they are, their dimension, the way they perceive their own place in the world. My technique works with that. Instead of coming up with a lot of loaded information about how you should move, I have to look at your body, how you perceive it, to see how you are going to move.

It allows me to really have this very large view of our position in the world, and I'm always questioning this position. What do we do in the world, and what is the validity of our existence in the world? How is dance moving around these things? For me, dance certainly is that – it is far from being just entertainment. It is fundamental in the way we can define our humanity and how we can integrate the world in us, and give back to the world. That's what dance is about.

Montréal by night runs from May 19 to 22 at La Société des Arts Technologiques (1195 St. Laurent). For more information, visit sat.qc.ca.