Yann Martel was kind enough to talk with me about his new novel, Beatrice & Virgil. Although it isn’t as easy a read as his other work and may leave some of his Life of Pi fans disappointed, I think it’s definitely worth it. Beatrice & Virgil is as much an intellectual and historical journey, questioning the ways in which we narrate the stories and facts of the Holocaust, as it is a work of fiction—featuring a cast of characters that includes a donkey and a monkey.

Due to length constraints I had to cut out parts of the interview. In addition to talking about literary devices and writing about the Holocaust, Martel also had lots of interesting things to say about the future of reading, e-books and the possibility of alternative literary forms. I’ve posted that part of the interview below. 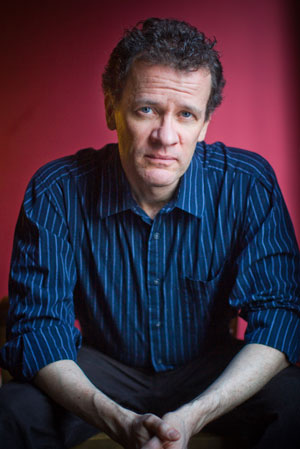 Caitlin Manicom: I interviewed you a few years ago to talk about your illustrated version of Life of Pi. I was excited by the incorporation of visual art into a literary text. I was also intrigued by the initial setup of Beatrice & Virgil as a flipbook combining fiction and non-fiction. Can you talk about your attempts to veer towards unconventional, alternative storytelling and publishing?

Yann Martel: Whatever form your story takes has to complement the story itself. There is one illustration of gestures of the Horrors in Beatrice & Virgil, but I believe form has to serve function. Beatrice & Virgil still has a flipbook cover in Canada. It leaves you asking which is the right way up. The flipbook symbolizes the Holocaust throwing the world topsy-turvy.

CM: While I don’t think that the production of physical books will ever cease, it is undeniable that things like the iPad represent a new type of reading. I’m wondering if creating new types of physical books, like illustrated novels or flipbooks that combine fiction and non-fiction, could highlight the value of the off-screen reading experience.

YM: A story ultimately works because it takes you in emotionally and at the same time makes you think. The problem with people who get too clever and too experimental is that you lose your story. Plot, insight and language are important. If it’s too clever in form people are constantly reminded of that.

CM: But what about e-books?

YM: I don’t have a problem with e-books, actually. They are good for ephemera—newspapers, magazines, genre fiction. It just means that people might only buy books they really love, and as a result they’ll have much better libraries. There’s a flexibility to e-books. The print can be larger and there’s the possibility of adding sound. You could be reading a novel set in Russia and have a gentle background of Russian music that fits the story.

CM: I hadn’t thought about the auditory component to e-books.

YM: Well, right now they all have robotic voices, but we’re in the beginning stages. I love audiobooks, and that can be integrated. In ten years e-books will cost ten dollars, they’ll be common products. But you’re right, maybe this will add another dimension to storytelling. A slightly more specialized product might be allowed to be more experimental.

—Interview With Yann Martel
—What is Yann Martel Thinking?
—Shock of the Old