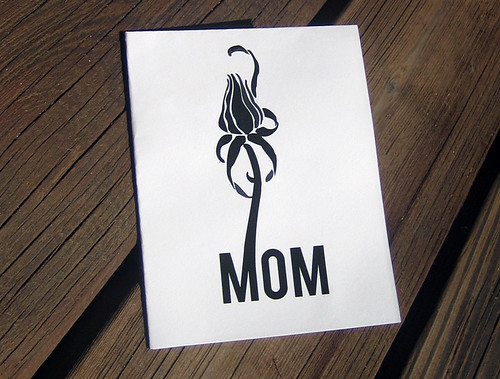 A few years ago, I was given a book about women who'd lost their mums. My dad’s girlfriend lost her mother to cancer, and Motherless Daughters had helped her mourn the things she'd missed out on.

My mother isn't dying, or dead, though. In fact, she would prefer to be a very involved mother. She is the type of woman who feels like she has given up everything for her children. She tells me this sometimes on the phone, slurring the words. “Thanks, mum,” I usually reply, or “I know, mum.”

We don't talk super-often, mum and I. My dad's girlfriend recognized something true—there are a lot of life experiences that I'll work through without my mother. When I think of having kids, for example, I do not think of asking my mother for any advice. In fact, I think of how far away I'll need to live so that it's convenient to say it's inconvenient for her to babysit.

I've come to terms with this. I have close relationships with other people, and I think I do an okay job of figuring life things out for myself. Sometimes, though, I feel the need to construct the semblance of a mother-daughter relationship so that my mum doesn't feel too badly about how things went down.

This is especially true on Mother's Day, the celebration of close mother-child relationships. Dear Mum, my Mother's Day cards start, I just want to let you know that I appreciate everything you've done for me.

It takes me a long time to write these cards, because I write the first sentence and then stare at it. I've Googled “things to write on a Mother's Day card.” I've kept sticky notes on my bedroom walls to remind me of what I can be thankful for. Dear Mum, I appreciate the vegetarian chili you made me in August of 2007. I have told myself, deep into card writer's block, that it really doesn't matter what I write, because my mum isn't paying close attention anyways.

Last year, when there were only 60 kilometres separating us, I offered to cook Mother's Day dinner. “I want to cook,” I told her, over the phone. I was standing in my kitchen, leaning against the counter near the sink. “We can come up with the menu together. I'll bring stuff to your house.”

“No,” she said. “No no no.” She was rifling through her cutlery drawer. My mother always multitasks when she's on the phone.

“Sweetheart,” she said, “Randy's cooking the meat. I'm just making a few veg. And a cheesecake. And a strawberry rhubarb pie. I don't know why I bother. No one eats dessert. Anyway it's nothing. We'll just barbeque.” She laughed and slammed the drawer shut. “You talk to your brother? He's picking you up?”

We showed up at her house and said hi to my step-dad Randy, who was on the porch. “Hi! Hi hi hi,” he said, “how're you guys.” He leaned forward for a hug, holding a bottle of beer and a metal barbeque flipper.

We went inside and gave our mum the flowers and cards and hugged her. Hugging my mum is a bit hazardous. You either need to avoid being burned by a cigarette, or you need to look out for your windpipe. She has a hug-from-behind technique that resembles a sleeper hold more closely than any kind of affectionate gesture.

We exchanged the usual “nice to see you, how are you doing”s, and then I asked if I could help her. She said “No, no no no,” and told us to go make ourselves comfortable. I noticed that there was already an empty magnum of white wine sitting next to the door, and a new bottle sitting beside my mother's plastic wine glass on the tiled kitchen counter.

Soon my nana came with my aunt and uncle, and then my step-siblings and step-grandfather arrived. After I talked to my nana and my aunt, I hovered in the kitchen, washing dishes and moving my mother's wine glass out of the way of her flurry of movement. She had served crab dip and pot-stickers and hummus, and made sure everyone had drinks. I couldn't tell, after that, what she was doing. She would take a casserole out of the oven and turn on a burner, refill her glass, ask my step-dad how long the meat was going to be on the barbeque. Then she'd put the casserole back in the oven, turn off the burner, and refill her glass.

Around 8:30 or so, my brother and my step-brother started whining about being hungry, and my aunt asked politely if there was anything she could do. The plastic fold-out table we were using as a buffet had started to collect empties, which I popped onto the tips of my fingers and took outside to the blue box. “There's only so much I can do,” my mother said, shrugging at supper-related inquiries. “I am only one person, and I'm trying my best.”

“Okay okay okay,” my mother said finally, after the meat had been put on the buffet. “We're ready, we're good to go.” She ashed her cigarette in the sink and looked around for her wine glass, which I'd hidden by the microwave.

“Let me get the stuff out of the oven,” I said.

My mother said no. “I'm a mother,” she told me. “This, this is what mothers do. I am a daughter and a mother.”

I reached out towards her as she opened the oven and grabbed at a dish. She hadn't put on oven mitts. She yowled and the dish clanged back onto the oven rack as my hands met her hips—I guided her away from the oven and towards the sink, grabbed her hands and ran them under cold water.

My aunt came into the kitchen to see what had happened and my mother and I looked up from the sink at the same time. I felt embarrassed for my mum, and responsible in a really convoluted way—like some other daughter might have convinced my mother to let her cook, or take everyone out for dinner, or something.

My mum shook the water from her hands.

“I give up,” she said. “You wanna take over? Take over.” She went outside with my step-dad.

My aunt and I set out the veggies and microwaved the gravy and managed to find everything my mother had planned to serve for dinner. We called everyone in from the living room, and I opened the screen door to get my mum. She said she wanted to stay on the porch and finish her cigarette.

I moved across the country last August. I sold almost everything I owned, but there was some stuff I didn't feel right getting rid off. Books, mostly. Including Motherless Daughters, which I'd never opened. I would've felt guilty reading it. I would've felt guilty getting rid of it. So I packed it up with the rest of my books, which were to be stored in my mother's basement.

This year, I have already mailed my Mother's Day card. It'll get there on time and she might read what I've written. Living across the country is a pretty good excuse not to have to visit her house. It also helped to generate content for the card. Spring came early here, I wrote, you would love to see everything blooming. I chose a card with flower petals pressed on its front.

Probably, for the rest of the days leading up to Mother's Day, I will wake up thinking about the copy of Motherless Daughters I have stored in my mother's basement. I will picture the layout of my mother's house—the distance between the box and the dinner table—and then I'll picture my family eating Mother's Day dinner without me.

I will call my mother on the morning of Sunday, May 9, and we will have a short conversation, and that will be that.