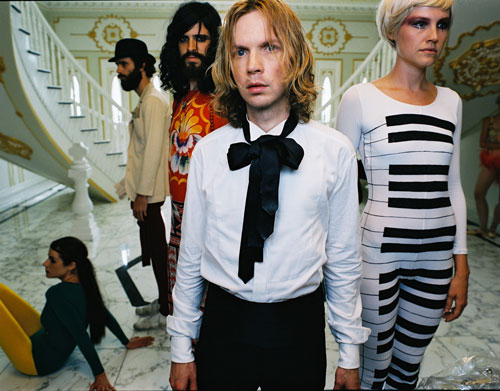 Not so very long ago, I was the arts editor of a university's student paper. A great thing about writing for young folk is that one can assume readers have a certain level of familiarity with pop culture; way-boring stuff (politics, activism, finances) needs chunky explanatory paragraphs, but nonsense words like Gaga and the Beeb pass for regular English. (Actually, Chicago-style would be The Beeb.) Popstars' names speak for themselves.

But one time I tried to publish an article with an unqualified reference to Beck. Something like this: "So-and-so says he looks up to artists like Beck." I got shut down—because, apparently, Beck is a man who does need introduction.

"I don't know who Beck is," someone said. "Beck" was changed to "American pop musician Beck."

I concede that a lot of young people—say, those who don't like pop music, or aren't from North America, or were raised by wolves—might not know who Beck is, even in context. But it got me thinking about the contemporary pop music canon, and what that might mean for the making of future-history. If we define "contemporary" as reasonably active in the last decade, and pop music as whatever kids like these days, and canon as those who need no introduction—who's in and who's out?

Here's an easy one: Kanye West recently released a new album titled My Beautiful Dark Twisted Fantasy—but you knew that, didn't you? Critics hailed him like a returning hero. I probably could have referred to him as Kanye—Ye, even!—and you'd still know who I was talking about. I guess he's in.

But I thought Beck was, too.

So I ask you, dear, sweet, well-informed Maisonneuve reader: in a (Western) world of online downloads, oft-mentioned blog hype and flabby, under-used attention spans, is there a pop musical canon? Not saying there has to be. Not saying there should be. Ain't nobody gonna tell us what to care about.

Let's put it a different way: as we head boldly into the twenty-teens, which musicans will be remembered—and for more than just a really great Twitter account?