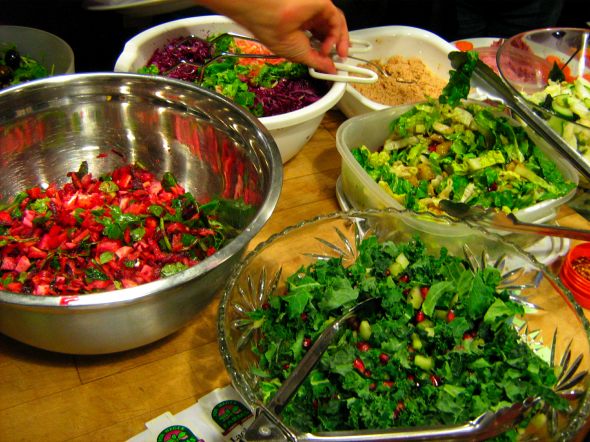 I’m not “raw”, I’m not vegan, and I’m not even vegetarian, but I’ve now been to two raw food potlucks at the Crudessence loft in Montreal. The loft is where the local raw food restaurant, Crudessence, gives its “un”-cooking classes; it’s where floor-to-ceiling windows in the vault-like space overlook the city skyline that sparkles at night; and it’s where raw foodists—and  those curious enough to make a salad and pay their $5 potluck entry fee—add their dinner offerings to the cornucopia of colours already present on the stainless steel countertop set in front of the long communal dining tables. 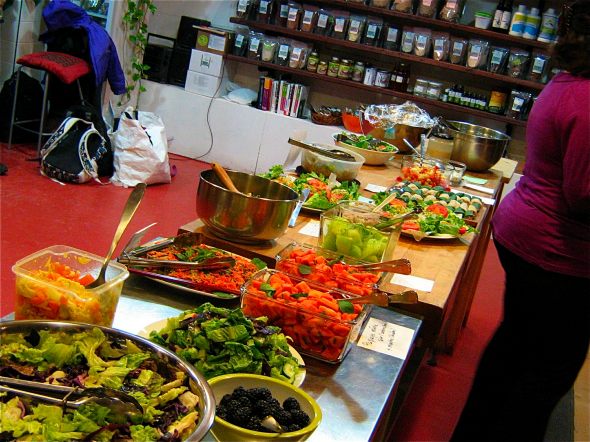 The first time I came to a potluck at the Crudessence loft, I spent the elevator ride to the eighth floor of the warehouse in Mile End worrying about being judged for my omnivorous tendencies and lack of raw food knowledge. I went out of curiosity and a desire to ask a lot of probably stupid questions. I’m not new to raw food diets—consisting of uncooked vegetables, fruits, sprouted grains, soaked nuts, and super foods such as maca, wheatgrass, and goji berries, all blended, dehydrated, or juiced—but coming to the Montreal mecca of the raw food movement was a little intimidating.

At the two Crudessence restaurants (on rue Rachel in the Plateau and Mackay downtown), squash, cauliflower, and parsnips are turned into “rice” or “couscous,” and zucchini strips become “noodles”. (However, as The Gazette noted in January, not everything they serve is raw.) At the potluck, I expected hardcore raw foodists to bring incredible dishes requiring hours of work and commitment.

Fortunately, the only truly intimidating dish was a dessert prepared by one of the event organizers, who runs a raw dessert business out of his house. There may be a lot of carrots involved in raw food diets, but his chocolate cheesecake and dark chocolate fudge—made from cashews, lemon juice, raw cacao, coconut butter, medjool dates and agave nectar with a hazelnut crust—was a far cry from rabbit food. 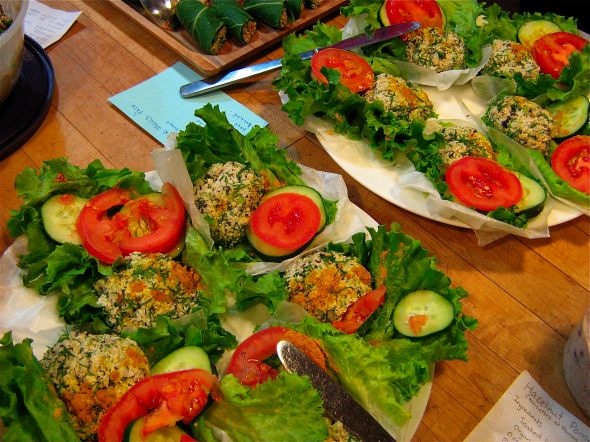 The raw food concept is to eat an “uncooked, unheated, unprocessed, and organic” plant-based diet. According to raw foodists, the enzymes in “live” food that help the body digest are killed when food exceeds 116 degrees Fahrenheit, and starts to degrade as low as 106 degrees.

Sprouted nuts and seeds are considered to be “living”, meaning their enzymes are activated by receiving a long soak and the nutrients will be more easily absorbed. The soaking and sprouting makes it easier to digest an uncooked (or even a cooked) mung bean or to digest an unsalted nut. Whether or not your raw chili of sprouted mung beans is delicious is a matter of personal taste, but with raw food, health is often promoted over taste. The chefs behind Crudessence, as well many of the restaurant’s regular clients, are not ready to give up enjoying food; they concoct raw recipes to turn eating this diet into part of a more holistic lifestyle—one where food contributes to overall well-being. That includes enjoying life, and especially enjoying food. 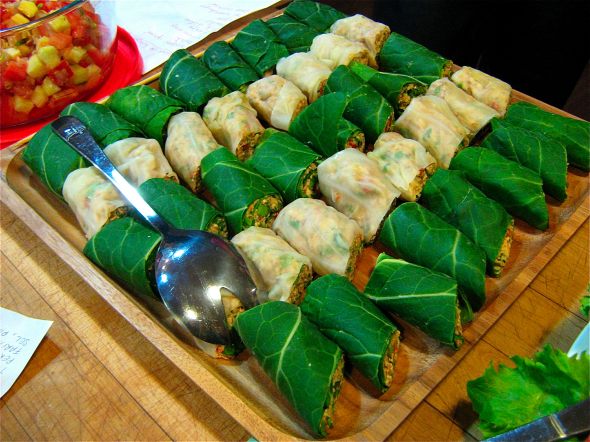 I was also scared in the elevator ride to the eighth floor because I’m a raw food cheat. I often use a brand of tamari that I bought before noticing that the ingredients included several preservatives and traces of wheat. Most “raw” foodists use expensive nama shoyu or less expensive all-purpose Bragg’s seasoning (two soy-based sauces promoted in raw food diets that may be difficult to find). Sometimes I even use bottled lemon juice over fresh, organic lemons, though I rationalize this by saying the bottle may have a smaller carbon footprint than the fresh fruit.

My offering for my first potluck was a cranberry-pecan dip simply seasoned with fresh lemon juice, agave nectar and Himalayan sea salt. I was too scared to add any dried spices that may or may not have been heat dried or artificially preserved, and I was also afraid to use fresh herbs because they’re not exactly local this time of year. 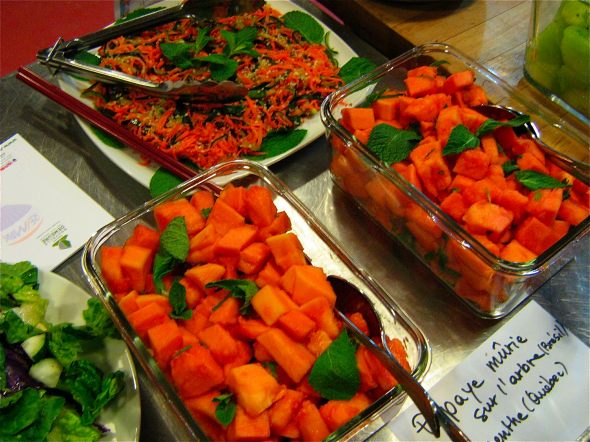 As it turns out, beside the fact that there will be more nutrients in something that hasn’t sat in a refrigerator truck and a warehouse for a few weeks, “local” often has nothing to do with “raw”, and I needn’t have worried so much about the nitpicky details of the ingredients for the potluck. Other attendees used olive oils, vinegars, and dried spices, and brought bowls of fresh papayas, mangoes, bananas and pineapples from South America, dishes with goji berries, pomegranates and dates from Asia and the Middle East, and the reigning king of raw food recipes: coconut oil from India. The last time I saw a coconut growing in Canada was never. Some dishes even had refined sugar—an obvious raw food no-no. I had to battle with myself to not be the kind of dogmatic judgmental raw foodist I myself was scared of meeting at the event, though sticking refined sugar in front of a raw foodist is akin to offering a lit cigarette to a former nicotine addict. 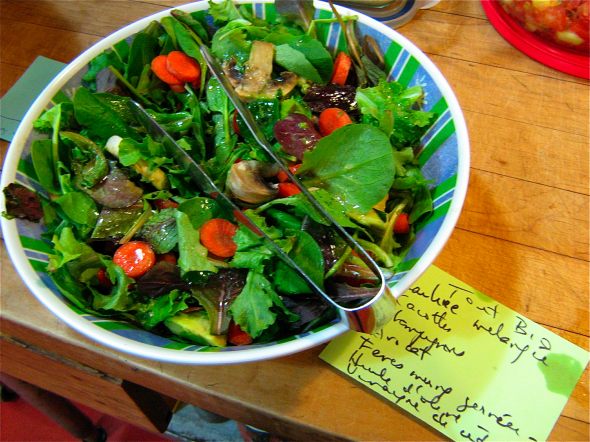 Other dishes were simple—sliced vegetables in light vinaigrettes, instead of the elaborate dehydrated, sprouted grain burgers and cashew cream or macademia nut lasagnas and crepes at the Crudessence restaurants (the burger is the best “raw” burger in Montreal or Toronto). But every dish was made with love, and as juvenile as that may sound, it helped us appreciate each one, from the simplest beet salad to the most complicated dehydrated sprouted millet tortilla with walnut paté.

My cranberry dip was well-liked, but long before receiving positive “raw” foodist feeback I’d known the evening was going to be a good experience. The moment I walked into the room I felt welcome. People weren’t there to judge me, but they also weren’t the stereotypical granola types that smile endlessly and seem to float on clouds or in hot air balloons that you just want to pop.

I didn’t wear a big badge saying “Meat is Delicious” or walk around preaching the wonders of “raw” cheese (as in probiotic, not raw vegan), but I also didn’t have to pretend to be someone I’m not. One woman gave me a half-disappointed look when I said I occasionally ate lamb, but I wasn’t going to lie to her. She later admitted that when she went home to Italy and her family fed her regional dried meat and sausage specialties she just couldn’t say no to her nonna. It was not an “AHA!” moment on my part, because I’d uncovered another raw food cheater. Rather, it was a moment of mutual understanding and respect. 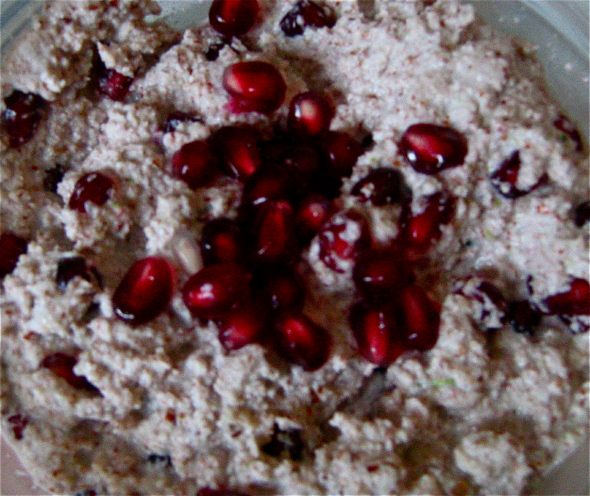 I’ve been to two of these potlucks now and both were very different. The first was packed with curious eaters with freshly-sworn New Year's resolutions. The hordes rushed the heavy-laden counter of food and gorged on the best-looking offerings before the 50 people behind them could sample even a teaspoon. “Wait for the kids to eat first,” the organizer had said. That certainly didn’t happen. These people were ravenous. I was shocked. Even after enjoying the good food that was leftover, I didn’t know if I’d want to spend another evening with people so carnivorous in behavior, if not in food choices. 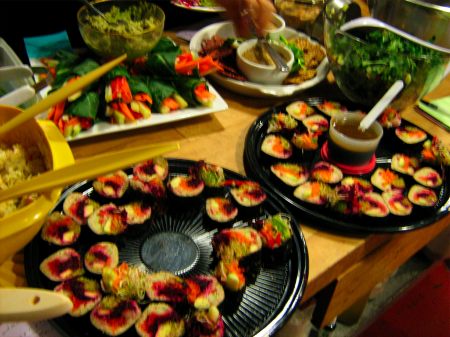 But I did go back, and I’m glad I did. The second potluck was made up of those with equally good intentions but slightly more dedication than a New Year’s resolution. In that calm, welcoming, stunningly beautiful space, the world slowed down for a few hours. I could exhale and feel weights lifting off my tired, meat-clogged shoulders.

Whether it was the theobromine or caffeine in the raw cacao truffles or brownies creating dopamine in my head, or the emotional release of being surrounded by open, passionate, curious, and non-judgmental people, I felt energized and alive. I sat down with my full plate of zucchini noodles, rice-less sushi, organic arugula salad with tahini-sunflower-lemon vinaigrette, tamari-marinated mushrooms stuffed with pine nuts and sundried tomatoes, a small glass of kale and banana smoothie (delicious, believe it or not), and a large glass of room temperature water and let conversations happen naturallty, while all those live enzymes worked away on helping to digest the ridiculous volume of food that is generally eaten at any potluck, raw or otherwise.

I floated out of the loft and into the snowy Montreal night, wondering if I’d turned into the type of hippie whose bubble I’d want to pop. Yet my feet were firmly on the ground, I wasn’t smiling stupidly, and I knew that I wouldn’t be craving granola anytime soon unless it was sprouted, dairy-free, sweetened with agave nectar, and served with a spoonful of cashew cream yogurt.

—"Sleep Together and Have Sons": Celebrating Chinese New Year with Sex and Dumplings
—Will Pay For Food: The Montreal Highlights Festival vs. Toronto's Winterlicious
—We'll Never Be That Drunk Again