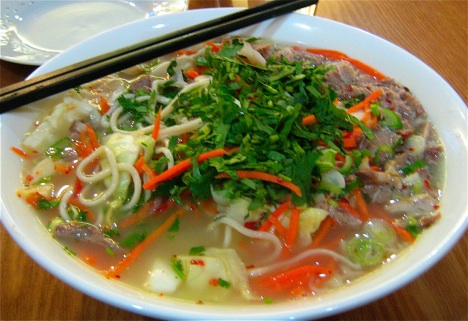 Despite the freakishly warm weather this week, I still think it would be horrible to be a raw foodist during a Montreal winter. There would be no tea, coffee, or hot chocolate to warm you from the outside in, no steaming plate of fettucine alfredo, and no walking into your apartment to the smell of a pot of slow-cooking tomato sauce on your stove. Most importantly, there would be no soup.

But to many Canadians that may not seem like the end of the world. “Soup is not a meal,” many of my (mostly male, carnivorous) friends have insisted, but more often what Canadian culture espouses is that soup is for lunch only, and since that can easily be replaced with a sandwich, soup is a non-essential food. The idea that soup is light and vegetarian is a horrible stereotype that Montreal restaurant Soupesoup (multiple locations) successfully breaks with options from onion beer soup to the chicken-based papaya coconut and ginger. Healthy? Yes. Filling? Yes. Light? Maybe compared to a pulled pork or egg salad sandwich.

Still, if your idea of a meal of soup doesn’t extend beyond a can of Campbell’s accompanying a grilled cheese sandwich, there’s a city’s worth of options yet to explore.

Thank goodness for immigration and Japanese ramen, Chinese lamb noodle soup, Korean pork bone soup and Vietnamese pho’. Each delicious bowl of tradition comes with a devout following of foodies. There are those who seek out the perfect pork broth and noodles for ramen—quality noodles that can’t be found at any Asian grocer in the city to compare with those made fresh in Japan. Ramen-Ya (4274 St-Laurent Blvd) does a passable version for those in desperate need of a fix, but those who think Ichiban (1813 Ste-Catherine St. W) is the best the city has to offer need to get themselves a few more frequent flyer miles and go directly to the source.

The same goes for pho’. You can find Vietnamese rice noodle soups absolutely everywhere in the city, but they’re so overpowered with MSG, sugar, salt, and low-quality meat that the $6 price isn’t even worth it. Still, the best option is generally agreed to be Pho Lien (5703 Chemin de la Côte-Sainte-Catherine), where the home-made beef broth is lightly flavoured with cinnamon, cloves and star anise (not enough to upset anybody, mind you), and the raw beef version is of high enough quality that they’re not afraid to serve it on the side if you ask. The worst thing restaurants can do is stick the thinly sliced meat all in the soup at once, and essentially turn it into cold-cut slices in broth with some noodles and bean sprouts. You’d be better off with Campbell's.

For wheat noodles in lamb broth there are two worthy options: La Maison du Nord (2130 St-Mathieu St) and Lotus Bleu (350 Duluth Ave. E.). In both places big lumps of dough are hand-stretched to the thickness of harp strings, swung and wound around the hands of the master noodle-pulling chefs. The lamb broth relatively simple compared to the precision required of ramen and pho’, but as the harp-noodles get thrown into the rich, dark, glistening lamb broth, you’ll forget all about pig.

Pork bone soup is a surprisingly difficult thing to find in Montreal. You would think that if any Canadians could appreciate a bowl with a big shank of pig in it, it would be Quebecers—lovers of all things swine.

But it’s Toronto’s Koreatown that champions the spicy soup. While Bloor Street West is blessed with twenty-four hour restaurants specializing in pork bone soup, Montreal continues to find comfort in a big plastic container of gooey, cheesy poutine. I guess you can’t really fault that…

…which brings us back to the most interesting part of the story of soup: when it’s eaten. Many Chinese wouldn’t consider a supper complete without a steaming bowl of whatever the meat and vegetables were cooked in, but back at Montreal’s best-known soup restaurant, Soupesoup, the doors are locked and the stock pot is clean. Of their six locations only one is open until 8pm. The rest close at 4pm, 5pm, or 6pm. The Old Port location is open for breakfast, but hungry business people that don’t have time (or know how) to use a toaster are not looking for soup between the hours of 8am and 11am.

So soups that are considered North American or European seem to only be acceptable at lunch or maybe as an appetizer for dinner. They are the poor man's meal, but even odds and ends can find their way into a delicious pot of bubbling comfort. "I like to open the fridge, see which vegetables need to be used, and create something wonderful from that," Soupesoup owner Caroline Dumas explains. If you’ve ever had soup at the end of the meal, though, you’ll know that it’s exactly what you need to feel full and satisfied—that warm, comforted feeling in your belly telling you that hunted and gathered enough for the day. Once, just once, I’d like to see someone polish off a plate of prime rib, baked potato, and grilled asparagus and follow it up with a can of Lipton’s Chicken Noodle—true North American fusion comfort.

—"Sleep Together and Have Sons": Celebrating Chinese New Year with Sex and Dumplings
—Will Pay For Food: The Montreal Highlights Festival vs. Toronto's Winterlicious
—Being In Between: Yung Chang Talks Films and Food