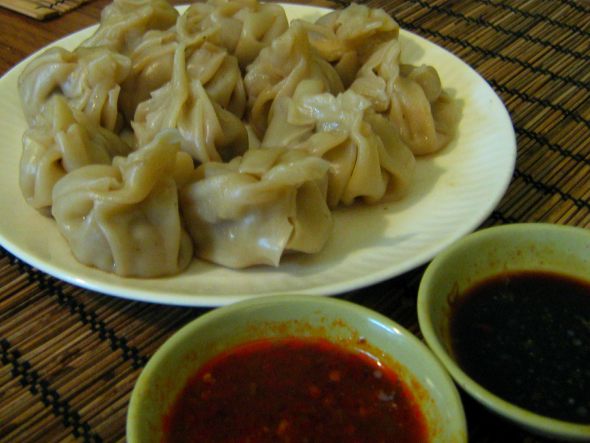 It’s Chinese New Year, and whether or not you’re actually Chinese, that means it’s time to eat dumplings. Noodles are traditional too, especially the “long-life” type that never seem to end, and create a very “Lady and the Tramp” kind of drawn-out, slurpy mess; but dumplings, specifically jiaozi, are snackable, squishy, chewy mouthfuls of joy that bring wealth, good luck, and prosperity.

Besides, why would you only want the long life promised by noodles when you’ll get it anyway through the good luck provided by dumplings? And long life isn’t always a good thing (think back to yet another Disney movie where a lamp got rubbed, a genie appeared, and kids and parents everywhere learned the important lesson to be careful what they wished for through high-energy, catchy melodies and dance numbers). So if you’re really nervous about not dying, just eat more dumplings since more dumplings will, logically, bring more luck.

Know what else dumplings bring? They bring sons, apparently. I knew Szechuan chili peppers were an aphrodisiac, but it’s both shocking and impressively sneaky of Chinese mothers and grandmothers to use delicious, wrapped meatballs as a way to encourage the continuation of their lineage.

A few other (less fun) theories about why jiaozi are eaten at Chinese New Year include the fact that when they’re all wrapped up they look like an ancient form of money called yuanbao (元宝) and that they’re stuffed with wishes and dreams for the coming year. Why you’d want to eat your dreams, however, I don’t know. Maybe Chinese mothers and grandmothers are hedging their bets by spiking the jiaozi with dreams that their children and grandchildren will procreate. Then when the kids eat them they fall under the jiaozi spell and start procreating like rabbits – something like Sleeping Beauty or Snow White, but with a lot more sex…I swear I’m done with the Disney references.

Speaking of those furry animals with tip-top reproductive tendencies, according to the Chinese calendar it’s the year of the rabbit – yet another auspicious sign that sexual excess is being encouraged.

Whether or not you think “jiaozi” actually means “sleep together and have sons” or you think it’s just a play on words (the Chinese character for “jiao” sounds like “sexual intercourse” and the character for “zi” sounds like “son”), the Chinese New Year is a perfect excuse to wrap some sexual or non-sexual salty, sweet and savoury hopes up in dough and get some practice in on the type of behavior that your elders are consciously or unconsciously encouraging through dumplings.

Eat up. You’ll need your stamina for the rabbit-influenced year to come.

Homemade is always better, but you can buy pre-made dough to save yourself a world of hassle. Making the troublesome wrappers by hand, however, will provide more opportunity to spike the meal with hopes and wishes.

60 dumpling wrappers (you can use anything flour-based, circular or square marked for dumplings, jiaozi, gyoza, or even wontons, though they all vary slightly)

1½ cups shredded Napa cabbage, optional. (You can use sauerkraut or other pickled cabbage if you’re using pork for an authentic combination)

Defrost the wrappers in the fridge if frozen. Combine all the filling ingredients.

Place about a tablespoon of filling in the middle of each dumpling wrapper. Wet the edge of the dumpling with water all the way around using your index finger. Fold the dough over the filling into a half moon shape and pinch the edges to seal. Do this with all the dumplings and place them on a floured plate or counter, ensuring they don’t stick together by sprinkling with flour or cornstarch as necessary.

Bring a large pot of water to a boil. Add half the dumplings (or fewer). When the dumplings rise to the top of the pot they’re done (about 5-7 minutes. Check one to make sure the meat is cooked before serving). Boil the remaining dumplings or freeze for later if the meat inside has not already been frozen and defrosted (in this case, cook the second batch of dumplings and then freeze them). Frozen dumplings will take a few minutes longer to cook in boiling water, but you do not need to defrost them before throwing them in the pot. Serve with black Chinese vinegar, soy sauce, and optional hot chili sauce so each diner may combine them in a small dish for dipping.

You may want to stop eating after 20 or so, as passing out from a food-induced coma does nothing for your sex life and future son.