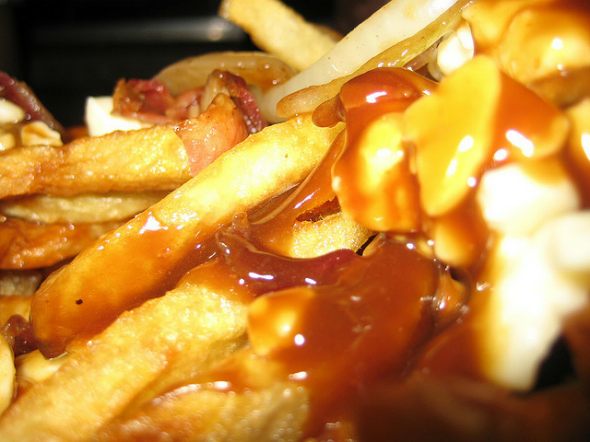 The best poutine in Montreal is a highly debated subject. Many a happy, drunken night has ended in a fistfight caused by a cheese curd-smothered, gravy-soaked disagreement. And many a disappointing “fancy” restaurant meal has ended in a much more satisfying plastic container or plate of the stuff; a square of filet mignon just doesn’t fill you up in quite the same way.

The problem with debating where to find the best poutine in Montreal (or Quebec in general) is that it’s highly individual. There’s no set formula for the perfect poutine. Basically, a poutine should be fries covered in gravy and cheese curds. There are things you can really mess up, but some people will love the greasiest of spoons no matter how soggy the frîtes, and others will be loyal to their childhood haunt even if the place is skimpy on non-squeaking cheese. While most agree that mozzarella or grated cheese is poutine blasphemy, there’s no consensus on whether the cheese curds should be completely melted by the gravy, only partially melted or maybe just placed on top so they retain their no more than one day-old squeakiness for the entirety of the feast.

Then there’s the fact that gravy is complicated; traditionally a real French gravy is made from either a veal-based “brown sauce” or “sauce espagnole” (a French “mother sauce” based on veal, beef, or poultry stock from which many other classic French sauces are derived) or veal demi-glace (equal parts veal stock and sauce espagnole), but just about everywhere in Quebec uses a prepared mix—something along the lines of the St-Hubert poutine sauce mix you can find in grocery stores nationwide. The best casse-croutes, diners, and dives pump up the flavour by adding wine or additional granulated meat flavouring (in the form of bouillon cubes), mushrooms or fatty, flavourful meats such as bacon, pepperoni or ground beef. So common is the use of the mix that it in itself is a beloved flavour of take-out poutine.

No Montreal restaurant would ever go through the labour-intensive process of making a traditional sauce espagnole. It involves browning the animal bones (usually cow), then brown the flour and fat (usually clarified butter or lard) and combine it with the bones, vegetables, seasonings and homemade veal stock—the making of which is another half a day’s work. Then the whole thing gets reduced and skimmed and reduced and skimmed, all the time adding more veal stock little by little, until the broth is clean and flavourful and the sous-chef is going mad from all that waiting and skimming. Even with the best intentions and a good recipe it’s easy to mess up.

To make the veal demi-glace version you do everything you’d do for sauce espagnole, but then you add an equal amount of veal stock. This makes the difference between a thick or thin sauce. All that work just to dilute the whole sauce with relatively watery baby cow…

Making the entire stock and sauce espagnole from scratch could take up to sixteen hours. Who would go to all this trouble to make poutine? Probably not you, and definitely not greasy spoons like La Belle Province, Rapido, Fameux or Patati Patata. If you’re making poutine at home, you can buy decent-to-good fresh or frozen demi-glaces at fine foods grocery stores or specialty butchers. But it just will never be the same as homemade, and it will cost you a fortune...at least for something that's meant to yield poutine.

So Montrealers had to acquire a taste for the cheaper, faster versions, and terms such as “demi-glace” and “veal reduction” were banished from snack food vocabularies. When it came down to so-so poutine or no poutine at all, Montrealers chose warm comfort.

3.     Poutine Lafleur in Verdun (3665 Wellington St.—not to be confused with the Lafleur fast food chain) 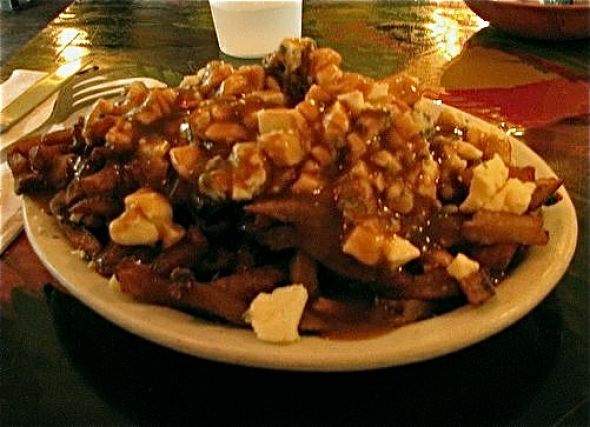 Photo: "Poutine From Maaam Bolduc" from -kj on flickr

Ma’amm Bolduc is the downtown winner. They use a beef-wine sauce (aka, wine-enhanced packaged gravy), their cheese usually squeaks (though not always) and the sauce is served piping hot. Opt for the beef bourguignon version for some added richness from pieces of beef and gravy-infused mushrooms.

Decarie Hot Dog is known mostly for its fries, but also for its “homemade”, slightly sweet, slow-cooked black pepper sauce. Its casse-croute hours (6pm-1am daily) mean that, instead of constantly reheating the sauce, they keep it piping hot (“slow-cooking”) on the stove—practical and beneficial. When the frying oil is fresh, you’ll be in heaven. Just don’t watch the counter staff handle both the food and the money. 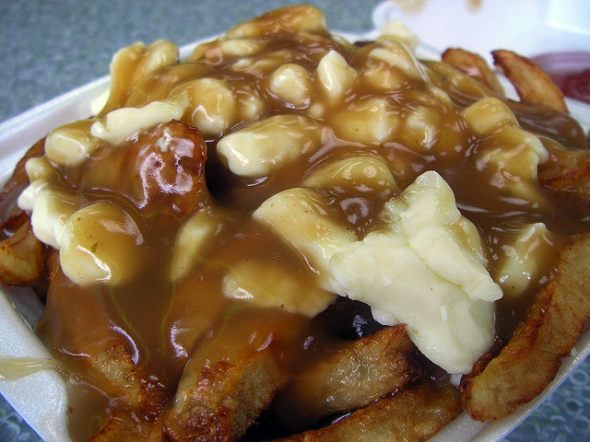 Photo: "Poutine at Lafleurs" by Kimberley Blue on flickr

Poutine Lafleur has mastered the desired taste for snack-shop, greasy-spoon poutine. It’s not trying to do anything fancy with its chicken-based gravy mix. The sauce is thick enough to not make the fries soggy and, for $4, you get the authentic experience of poutine in a plastic container. No plates in these parts. Just don’t let a lid get stuffed in top of your container and melts all the cheese before it’s in your stomach.

Some people also advocate for Patati Patata (4177 St-Laurent Blvd), where you’ll find another so-so enhanced gravy mix using white wine and powdered chicken stock. It’s a thinner sauce, though, so you have to eat fast before your fries get soggy.

Some people may be upset that La Banquise (994 Rachel St. E.) isn’t on the list. The fact is their gravy is pathetic. It tastes fine when you’re drunk at 3am, but if you actually came here sober, it’d be nothing to write home about. If you must go there, opt for the pig or beef-topped options. There are a lot of them, including the basic bacon poutine ($6.99), poutine Trois Viandes ($8.00 for bacon, beef and pepperoni), poutine T-Rex ($8.55 for all of the above plus 55 cents-worth of smoked sausage), or poutine Jaco ($8.75 for ground beef, onions, mushrooms and special pepper sauce). The extra fat and salt in the animal products is a natural gravy-enhancer. But come on—you would never willingly pay those prices if you were sober.

Wherever you go for your poutine fix, keep in mind that this is supposed to be heart attack-inducing fast food. Pick up a Lesters hot dog while you’re up at Decarie, enjoy the griminess of Lafleur, and smile at the bohemian qualities of Patati Patata. Say hello to your fellow 4am poutine diner at La Banquise, but shut up before the fight breaks out over the fact that you think it’s ridiculous that someone would spend $8 on a plate of fries with guacamole, sour cream and tomatoes. Here's to industrialization and the creation of gravy mix.

—Will Pay For Food: The Montreal Highlights Festival vs. Toronto’s Winterlicious