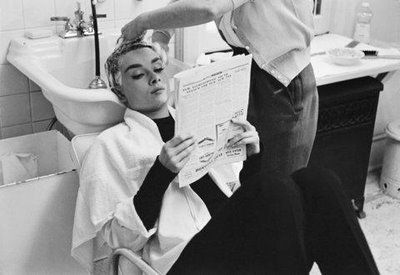 Last December, Anne Hays, the founding editor of Storyscape Journal, noticed a shocking imbalance while reading the latest issue of the New Yorker. After a quick tally of bylines, she realized that only two out of seventy-six articles in the entire issue were written by women.

Hays sent the magazine back to the editors, accompanied by a letter in which she vowed to return every copy until the magazine published at least five female writers per issue. Though "some would claim our country's sexism problem ended in the late '60s," she wrote, "the most prominent and respected literary magazine in the country can't find space in its pages for women's voices in the year 2011." Later, Ms. Magazine started a petition in support of Hays, and CBC Radio's Sunday Edition featured Hays' story in a roundtable discussion about the lack of women in publishing.

Earlier this year, American literary organization VIDA published The Count, which compares the number of men and women featured in major American literary publications of 2010. Its numbers revealed, not surprisingly, that female writers and journalists were far more rare than their male peers. Then, in Maisonneuve's summer issue, associate editor Madeline Coleman published "Writing Her Off," a critique of sexism in magazine profiles of female subjects. "The smart, self-possessed ladies whose life stories grace the pages of major magazines and newspapers are described with words that contrast their femaleness with their careers; successful yet female, instead of successful and female...And the writers most likely to reduce them, more often than not, are male," Coleman wrote.

From the subjects of articles to the writers behind them, there is a none-too-subtle gender disparity in literary and journalistic communities. Critically acclaimed novelists, syndicated columnists, and editors and writers for magazines, newspapers and journals—all are still more likely to be men. But are men the only ones at fault?

Consider a 2010 study at the University of Georgia. The project looked at 2009 graduates from the mass communication program, and found that women disproportionately specialized in advertising and public relations compared to men—in other words, more reliable fields of full-time employment, especially during the US' economic downturn. It is easy for us to notice gender imbalances and assume women are being oppressed or somehow silenced by employers, when in actuality the cause is much more complex.

The greatest enemy to female writers is gender socialization. Sexist hiring practices are nothing compared to the social pressures and expectations facing women from day one: from how we should dress to what career we choose, engrained cultural constructs now have far more bearing on gender imbalance in the media workforce than discrimination at the hiring level. From birth, our "liberated" daughters are still encouraged to play with dolls and tea sets; the media, including advertisers, are largely responsible for sending them down a path towards motherhood, good fashion sense and aesthetic know-how. It is no wonder that women tend to flock towards design and entertainment magazines rather than news and politics.

I entered the world of journalism writing for the Western Gazette, a student paper at the University of Western Ontario where women have dominated staff writing and editing positions for the past few years. Most of my female peers went on to pursue careers in other fields, or chose "safer" alternatives such as public relations work.

Out of the few of us who continue to pursue journalism, several have moved into broadcast. The woman I know who remain in print mostly specialize in fashion, entertainment or music. They leave the news features, political columns and sports commentary to men. I cannot help but wonder if the "shocking" lack of parity in publications such as the New Yorker reflects a lack of interested women writers, rather than a sexist attitude among their employers.

The suggestion that journalism is a boys' club is hardly new. The word "newsroom" conjures up images of offices hazy with smoke, populated by gruff men in suspenders who sip whisky as they hunch over typewriters, rushing to meet deadline. The likes of New Yorker-boycotter Anne Hays have been struggling against sexism for centuries; however, in their (worthy and respectable) fight to empower female scribblers, I feel some women may be operating on precarious assumptions.

Michele Kort, senior editor of Ms. Magazine, told AlterNet that the "New Yorker can only offer a richer perspective on the world if it includes more women's voices." But what is a "woman's voice"? Do I have one? While I may identify as a woman, my writing rarely deals with anything traditionally associated with womanhood. The idea of classifying my voice under any category seems limiting. In my experience, noone has a singular voice, be it female, conservative, indigenous, Muslim or anything else.

An important factor in gender equality involves being seen as a person first and a woman second (or third, or fourth). To designate my voice as female, rather than simply my own, stands in direct opposition to feelings about women's liberation. In labelling my voice as female, I would be encouraging the reader to judge me for my gender (and its associated stereotypes) rather than for my education, my accomplishments, my beliefs and ultimately my individuality. Nevertheless, people like Kort insist on the need for female voices in a community that seemingly favours men.

The male-versus-female voice issue is problematic as presented in The Count and other such tallies, which illustrate gender as binary. The Count's pie charts divide writers in two by colour: blue for women and red for men. As a result, gender is depicted as chartable and dichotomous, leaving no room for other gender orientations, and ultimately placing this false conclusion in a forceful visual display.

Aside from false depictions of gender, the movement to include more "women's voices" in journalism makes the grave error of assuming that gender is relevant to writing. My viewpoints have no more grounding in my gender than they do in the fact that I grew up in a rural township or that I'm vegetarian. My voice is a malleable organism, the result of the combined and ongoing sum of my experiences; it is a kaleidoscopic conglomeration of all my beliefs. Defining any person and their words by gender would be as harmful as excluding their views altogether.

Above all, the most disturbing response to gender inequity in the writing community is the demand for gender quotas. In a 2006 AlterNet article, Feministing.com editor Ann Friedman wrote on byline parity: "Things will never change unless magazines make a specific commitment to raising the number of women who appear in their pages." She later adds, "Target percentage for women's bylines should be set in the editorial policies of each publication, at least in the short term."

When I think of hiring quotas I recall playing tag as a child—specifically, how older kids would not to be able to catch me, when in actuality they could have grabbed me at any point without breaking a sweat. For me, quotas are nothing more than pity votes. Far from encouraging skilled female writers, quotas enforce tokenism by including women only because of their gender.

There is no denying that women face more challenges than men when trying to "make it" in the writing world; the institutional sexism of past generations, while for the most part removed from official policies in Canada, continues to ripple outwards in the form of social pressures and unwritten rules. Nevertheless, it is our responsibility as women to rise above these challenges rather than pull the gender card. Editors have enough on their plates as it is. Asking employers to take female writers by the hand and baby-step them to success suggests that women do not have what it takes to make it in the competitive world of journalism—which I believe is untrue.

A better solution would be to examine how our socialization process influences the choices men and women make in their careers. Editor-in-chief and co-publisher of the Walrus, John MacFarlane, weighed in on the lack of women in the publishing sector on CBC's Sunday Edition. "My daughter is in the [freelance writing] business," he said. "Her opinion is that women just don't want to put up with the insecurity of freelance writing and men, who are more ego-driven, will."

MacFarlane's theory is the most believable I have encountered so far. Although it's unfair to generalize men as "more ego-driven" than women, there does seem to be an overarching difference in our willingness to take risks, especially financial ones. Instead of enforcing an artificial parity, we may do better to re-examine our boy-versus-girl concepts of gender and how these constructs affect women long before they enter the workforce.

Punishing editors for their supposedly sexist hiring practices ignores symptoms of a problem that begins in childhood. The ultimate solution is to remove gendered career expectations from our culture. We live in an era when girls can grow up to become politicians, and boys can become stay-at-home dads, and we should encourage those breaks with traditional roles.

To anyone who says there are fewer women than men in the writing community, I say: so what? Point me to a publication in Canada or the United States where female writers are silenced, banned or oppressed, and I will join wholeheartedly in the fight for equal opportunity. But to suggest we apply some sort of enforced byline parity or push the bogus concept of "female voices" means avoiding the root of our gender issues. True equality is not about tallying bylines, but rather about allowing our words to speak for themselves.

For a response to this blog post, read Female Writers Don't Get Bylines—And It's Not Always Their Fault.

—Writing Her Off
—Notes Toward an Essay on Women in Literary Journalism
—How to Make it as a Writer: Be a Man