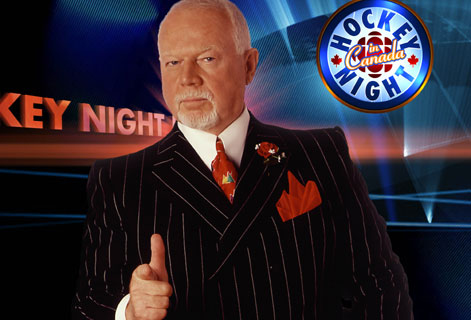 Hockey, and in particular the NHL, is at an interesting crossroads. After a nightmare off-season that exposed the sport's flaws and failures, the coming season will be a watershed moment for Canada's favourite activity (outside of beer and talking about the weather). With the NBA in a labour dispute, the NHL could have the North American sporting scene to itself following the Super Bowl. And although hockey will never have ratings issues in Canada, the return of the Jets to Winnipeg and an improved Toronto Maple Leafs should increase the sport's national visibility to an all-time high. In consideration of this exposure, it's time the CBC took into account its responsibility as the rights-holder of the sport's crown jewel, Hockey Night in Canada, and the crucial nature of the sport's year, and fire Don Cherry and Ron MacLean.

Don Cherry has been espousing closed-minded, ignorant, childish opinions on the CBC for nearly thirty years. For a long while, it was amusing in a nationalistic sort of way. It would never be seen on an American network. For that matter, it would never be seen on any other network, anywhere. "Coach's Corner" is ultimately very Canadian. It's a caricature of sports commentary, an homage to the self-deprecating and humble manner in which Canadians can laugh at themselves and each other. "Coach's Corner" would be a hit on Saturday Night Live. It's a parody. Near-brilliant comedy.

The segment has a one-camera setup, because early efforts to teach Cherry how to manage multiple cameras ultimately failed. Cherry quite often gets players' names wrong, notably Jarome Iginla ("Igilina," or "Ingila"), Roberto Luongo ("Lulongo"), as well that of every player born east of Newfoundland and west of Victoria. His suits are a national punch line, and would make Liberace blush. He cheers for the Leafs and the Bruins, openly, and hates the Canadiens and most things Québécois. He sings the praises of tough players, players equipped with grit and sandpaper, players who hit and fight, and after the game drink beer and bed women. He uses the pejorative "redneck" as a positive. He hates "pinkos" and "commies" and the sissies on the left. When he isn't on TV, he's at rinks in Mississauga and Pickering and Ajax, watching midget and peewee games, which would be creepy if he wasn't Don Cherry. During the summers he sits on his porch on Wolfe Island with a shotgun and a Molson Canadian. He's a War of 1812 buff. He supports Rob Ford and Stephen Harper. He's had a series of female Bull Terriers named Blue. He hates cats.

His partner for the bulk of the thirty years has been Ron MacLean, who, at some point, was a sports journalist of sorts, but who has since deteriorated into the parodic nature of his role. He is Cherry's straight man. Cheech to his Chong. Abbott to his Costello. Wayne to his Shuster. MacLean's job is the simplest in pro sports broadcasting. He asks Cherry about, you know, stuff, and Cherry talks about it. Or yells about it, rather. Then MacLean makes a really bad pun, and the segment ends. The only exceptions are the segments where Cherry talks about fallen soldiers and policemen, and then cries a bit after calling them brave and beautiful. (Seriously. The fact that Lorne Michaels, a Canadian, hasn't pilfered Coach's Corner as a running skit on SNL is beyond me.)

MacLean should act as a voice of reason. He should be Cherry's conscience. Our conscience. He should verbally slap Cherry across the face, knock him down a peg or eleven. Over the past few years—and notably since his very public contract dispute with the CBC—MacLean has developed quite the ego. Though he still facilitates Cherry's insanity, he speaks with more arrogance than he did before. He refers to players and management by their nicknames and first names. He takes every opportunity to discuss his minor-league refereeing.  He speaks of the game's issues in absolutes. He has a frighteningly diverse knowledge of Canadian indie-rock bands, and is taken to quoting lyrics in intros. Worst of all, MacLean enables Cherry. He is a walking, talking bottle of scotch with a straw, a loaded syringe next to an addict. He completes the parody.

Except it isn't a parody. Padgett Powell, the brilliant American writer, once told a writing workshop I was in that a parody requires the author giving his audience permission to laugh. And the problem is that "Coach's Corner" is no longer amusing. The CBC has been complicit in allowing the segment to continue, in allowing Cherry and MacLean a pulpit from which to preach to the masses every Saturday night. And the sermons are racist, ignorant, ill-informed, baseless, self-serving, childish, offensive rants that have no place on television, let alone on the public broadcaster. If the CBC took the two off the air tomorrow, there would certainly be public outcry, but not lower ratings for Hockey Night in Canada. Hockey is our scotch and loaded syringe. It's our addiction by birthright. And in its most important hour, intelligent, informed, and thoughtful opinion needs to be at the forefront of the discourse. The CBC is wasting the forum, and insulting us all the while.

The best argument in favour of the dismissal of Cherry and MacLean: it is hard to believe that any other broadcaster would hire them. There is no competition for their services. And if no one else wants them, why should the CBC? TSN and Sportsnet and their various properties, while certainly not perfect in their approach to covering hockey, have at least taken to hiring progressive and informed voices. Bob McKenzie, Jeff Blair, Stephen Brunt, Damien Cox, Dave Hodge, Bruce Arthur, James Duthie, Pierre McGuire, Gord Miller and Michael Farber, just to name a few, are professionals. They are keenly aware of the sport's flaws, as well as cognizant of its evolution. They're not perfect. They've been complicit themselves in ignoring issues like concussions. But they're not xenophobes. They're not troglodytes. They're not racists. They're not idiots. They're not Cherry and MacLean.

Last night on "Coach's Corner," Cherry pushed his antiquated opinions too far. After the suicides this summer of NHL enforcers Derek Boogaard, Wade Belak, and Rick Rypien, several former fighters bravely came out to speak openly and honestly about their own struggles with the role, as well as their addictions and troubles with drugs and alcohol, which they feel were brought on by being forced to literally fight for their dinners. It was an example of selfless and generous humility in the face of tragedy that should have been (and was, by many outlets) celebrated and commended. But not by Cherry, and not by MacLean. Instead, Cherry berated the former players:

"The ones that I am really disgusted with ... are the bunch of pukes that fought before: Stu Grimson, Chris Nilan and Jim Thomson."

"[They say] 'Oh, the reason that they're drinking, [taking] drugs and alcoholics is because they're fighting.' You turncoats, you hypocrites. If there's one thing I'm not it's a hypocrite. You guys were fighters, and now you don't want guys to make the same living you did. You people that are against fighting, you should be ashamed of yourselves. You took advantage of that to make your point on fighting."

Anyone who has struggled with addiction or depression, or witnessed those struggles firsthand, knows how difficult it is to talk about it, let alone talk about it publicly. What Cherry did was make the discussion about him. He changed the focus. He is a child who had an on-air tantrum. And at a time when pugilism in hockey, and its connection to serious mental-health issues, demand and enlightened debate, Cherry and his partner MacLean have retarded the progress of an important discussion. The CBC needs to be a responsible public broadcaster and remove "Coach's Corner" from Hockey Night in Canada. This is a time for serious discourse on a troubled sport. The children need to be sent from the room so the adults can talk.