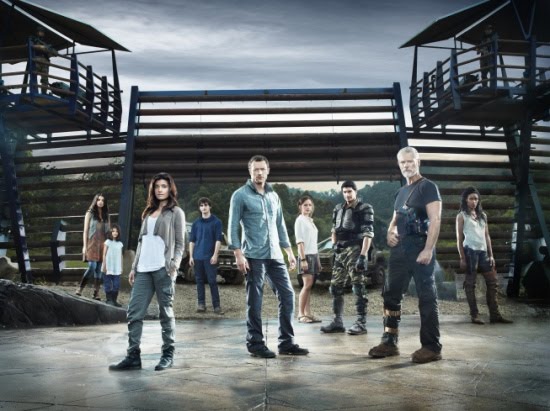 I like bad TV. My roommate tries to get me into the good shows. Like The Wire, and Boardwalk Empire, and Mad Men. And it's true that these programs are all-around great: sharp writing, ace acting, star directing, they've got it all, bada bing bada boom. And Salon likes them, so obvs the clever kids of my generation are right. I get it, they're awesome, I agree. Yeah, yeah. I was even in a writing class with Mary Gaitskill where she praised The Wire a bunch of times. She said of course people like it because it's an army and a novel is a soldier. Or something that made more sense than that. I knew what she meant. And you know what I mean. I'm all ra-ra over here—a team of sharp folks making witty writing's a fab thing. A win, a manoeuvre on an intelligent audience. Yay.

But there are no psychics in these shows. Or dinosaurs. Or time travel.

Of course, psychics and dinosaurs and time travel are not the only elements that I crave when I'm watching TV. I also like ghosts. And angels.

Like sometimes I stream episodes of Touched by an Angel. I used to watch Touched by an Angel with my ex-mother-in-law, Sheila, a total sweetheart, a charismatic Catholic (by which I mean both the official, 1970s Pentecostal movement and her general disposition) who had, as she called it (she said I had it too) "the gift of tears"—which meant that we'd get weepy when we'd talk about things that moved us. Her son and I broke up ages ago, but Sheila and I remained friends until she died of cancer, last year. Now, watching Touched by an Angel reminds me of our hangs.

Except when I consider whether an angel would bother surveilling me. Of course, I jump to the rote Q: would an angel eyeball everything I did all the time? I've worried about that. Not in any real way, because I don't necessarily believe in any deities or their minions, and I think everyone should whack off. And I wasn't raised Catholic or anything, there's no Tori Amos switch going off, for better or worse. But the idea of being checked out by an otherworldly being, looked in on all the time, or even some of the time, even if it's "I am an angel of God"-y, is pretty creepy. It's worse than Google Street View. Anyway. I probably only think of it like that because I watch Touched by an Angel really late at night. When I'm trying to fall asleep, etc., etc. So I like the show a lot, but I'm also comme-si-comme-ça about it. It's fraught, like most things.

I check in on Medium periodically, even though it wrapped up a while ago and I've watched every episode already. But I dig watching it because, like the main character-based-on-a-real-psychic, Alison Dubois, though less so, I too, am pretty intuitive. And I feel akin to Patricia Arquette, who plays the role of Alison Dubois. For instance, I have blonde hair that I wore in a bob for ages, like she does on the show, and biggish boobs, though not as big as hers, particularly since I went off the pill. I like how she argues with her husband, but how they resolve their problems despite him being an engineer and her being a psychic and those two professions, or lifestyles, really, not always meeting eye-to-eye. And I like their late-night conversations, pre- her waking up with a start because there's another fucking ghost in the bedroom. It's great how she never gets used to her gift, how she's always taken aback when those who have crossed over try to make contact with her directly, or via her kitchy, B-movie-feel dreams. Myself, I've mostly been dreaming about horses, lately.

Probably my most shameful show I watch, worse than Touched by an Angel, is Blue Bloods. I explain it like this: I come from a poor, left-wing, multi-marriages-of-multi-cultures, artsy family. I grew up going to my mom's warehouse performance pieces (she threw stuffed babies on the floor, sobbing), in art studios full of olives and acrylics and cockroaches, or sitting on my dad's desk when he worked nights at the Canadian Press and couldn't get a babysitter and he'd bring me, to his colleagues' delight, to the office. (I liked watching the wire then.) So a clan of dapper Irish-American crime-fighters is a real escape for me, as much as it is for anyone, I'm sure. I wonder if the clothes they're wearing are from J Crew, and how I'd look in a grey pantsuit (probably pretty butch). I wish I was a lawyer. I wish I was making a difference. Like the way Nancy Drew's cases always merged with her dad's, this one tight-knit family solves all of New York's crimes. Contrived isn't even the word for it. I lap that shit up.

I'm a sap. I'm a wannabe bougie. Scratch that, it's worse—I'm a wannabe suburbanite. That's what it is. I'm proud of my eccentric family. But secretly, I'm the Alex Keaton of my kin. I wish we were normies, sometimes. I pine for a mom and dad who own real estate, with funds, a weekly family dinner, a sense of resolution after a hard day's work, a sense of mysticism, and also—while I'm throwing this all out there—some kind of certainty with regards to life purpose. Like travelling deep into the past through a space-time continuum, like in that new show Terra Nova, starting a fresh version of humanity among the dinosaurs in a parallel land before time. I'll take all those things. Wrapped in brown paper package and tied up with string. I don't need it to look real. I want it to be contained. Not at all art. Just a wistful, lazy glossing. I know. It's a yawn without even the ploy to get your arm around a girl's shoulders. I feel badly about that. But I'll still watch it.

My mom and I will make a night of watching bad TV. Probably even next Friday night we'll do it. We'll stretch out on her blue L-shaped sofa in St. Henri and knock back beers to a string of predictable shows. We'll turn up the volume when the trains rattle by. When we're sitting there together, we banter about the characters ("Would you wear a dress like that to talk to a ghost?") and we don't have to talk about the trickier parts of our relationship—what I said to my brother, for instance, or how many times I've dropped out of school, or how my French accent is fucked up, or any number of things that happened in the eighties. It's like the TV shows are egging us into normalcy. We are rarely so easy with each other.

Come Saturday morning, she'll be defacing Barbies or sawing frames in the yard. And I'll be thumbing through a pile of books with a bowl of café-au-lait. Dreamy, quiet, soothed.