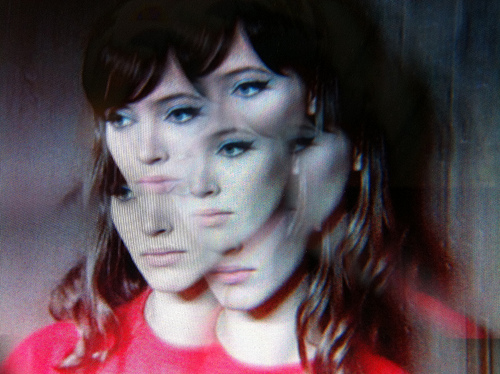 Jane Birkin reclines in an oversized sweater. Patti Smith smiles elusively while Anna Karina swings her hips through a Parisian poolhall. Miranda July stares into the camera, her blue eyes wide. And young women spend hours hunched over laptops in coffee shops and unkempt apartments, feverishly reblogging images of these and other stars. It's nothing serious—just a girl crush.

If you're wondering who to crush upon, history suggests patterns: a sense of humour seems important, but no more than good hair; paleness could be a factor, although there are the odd Beyoncés; extra points for living in New York and looking hot in men's clothes. Having a girl crush isn't about wanting to sleep with someone—it's about wanting to be her, and publicizing this desire is part of the game. The most likely girl crushes are "the new 'strong female characters,'" writes Mishal Cazmi in a Toronto Standard article published last week, "females who are strong when they need to be, but are also messy, adorable, complicated—in short, kinda like us, but under a soft-focus spotlight."

The girl-crush concept has been adopted by everyone from Cosmopolitan to Ms. Magazine, which praised the idea's feminist message. The Toronto Standard audaciously titled Cazmi's article "A Better World for Women, One Girlcrush at a Time." Cazmi admits that the word "girlcrush" could be perceived as somewhat juvenile; but "even if it is a little-girly word, maybe that's what women need: a reminder of our long-gone, less jaded selves. A reminder of when friendships were pure, healthy, unstained by jealousy."

But what does the girl crush actually accomplish?

Girl crushes—when one woman "admires someone so much" that she "wants to be her"—were first mentioned in the New York Times in 2005, in a trend story titled "She's So Cool, So Smart, So Beautiful: Must Be a Girl Crush." The writer, Stephanie Rosenbloom, is careful to specify that these are hetero crushes she's talking about. "Social scientists suspect such emotions are part of women's nature, feelings that evolution may have favored because they helped women bond with one another and work cooperatively," she writes. "What's new is the current generation's willingness to express their ardor frankly."

The girl crush is often celebrated in inverse proportion to its antonym, what Cazmi calls "girl hate": the idea that all women are evil shit-talkers raring to claw each other's eyes out. And yes, a lot of media outlets love to milk it when ladies got beef. But by painting the girl crush as an antidote to that bullshit, girl-crush boosters confound media coverage with reality. Cazmi moans that "characterizations of women in the media include, and are still too often limited to, lascivious 'sluts,' greedy 'bitches,' and overemotional 'headcases' (or, if we're lucky, all of the above)." If we can counter those images with some real nice girl crushes, she insists, we'll be one step closer to gender equality.

The truth is, no relationship between women, or anyone else, is all good or all bad. Countering girl hate by insisting, the way Cazmi does, that female friendships are inherently "pure" is equally delusional and awfully Victorian—as if complex emotions were truly against our natures. Women are not obligated to always get along and admire only other women. This is especially complicated by the fact that some women also want to fuck each other.

The girl crush is, like bromance, such a straight-person thing. Discussions of girl crushes consistently frame them as a desire for another woman's attributes, rather than for the woman herself; crushing on Patti Smith's androgynous style, for instance, or Jennifer Egan's writing—no homo! But that raises questions: could a trans woman have a girl crush? What about a gay man? Those who celebrate girl crushes seem unsure how to handle the possibility that lady-to-lady admiration might involve lady-on-lady touching. Take Cazmi's response to rumours that recently divorced J. Crew president Jenna Lyons, girl crush to many, is now dating a woman: "The girlcrush just got real." But Lyons, who's in her forties, is unlikely to have a "girl crush" on someone she's sleeping with, and it seems awfully patronizing to frame an adult romance that way.

Who else is excluded from girl-crushdom? Two magazines often cited in girl-crush discussions, including in Cazmi's Toronto Standard piece, provide some clues: baby-doll fashion rag Lula and self-declared "fabulous women's magazine" the Gentlewoman. Both focus exclusively on female subjects, albeit not the same ones. On their pages, actresses, musicians and models might share space with filmmakers and chefs. But these outlets are still far from inclusive: as in most fashion magazines, their subjects tend to be good-looking, well-off white women. In the autumn/winter 2011 issue of the Gentlewoman, for example, every single woman profiled is white.

You could argue that any kind of woman could be "honoured" with your own girl crush, even if magazines choose not to feature them. But if the girl crush has any power at all—to counter girl hate, or promote women's achievements—it resides in its publicity. When Ms. praised the girl-crush trend in a September blog post, it lauded the term for promoting a celebration of inspiring ladies. But publicly sanctioned girl crushes, in magazines and on the reams of girl-crush blogs, are not about inspiring ladies in general. They're about a specific kind of coolness, as embodied by thin, elegant women with casual haircuts. As a friend of mine pointed out, "Nobody has a girl crush on Rosa Parks."

I suspect the girl-crush concept is so appealing because it doesn't challenge anything. It embodies a girl-power, and-she's-pretty-too, apolitical take on feminism, one that is more style than substance. Instead of examining every public figure, female or otherwise, with a critical eye, the girl crush encourages us to pick out a handful of women, call them "girls" and slot them away in the realm of unassailable cool. Yes, talking about girl crushes can be fun. Everyone needs strong female role models. But I can't help feeling that, by encouraging each other to obsess over girl crushes, we somehow reduce both the praisers and the praised. A girl crush has never hurt anybody. But has it helped them?

When New Yorkers Thessaly La Force and Jenna Wortham launched their Girl Crush Zine in July, a contributor of particular interest was Jennifer Egan, the American author who recently won a Pulitzer for her novel A Visit from the Goon Squad. The zine's editors are big Egan fans; La Force had recently posted an adoring missive on the Paris Review's website, where she worked as a web editor. When they contacted Egan about contributing, she sent them a story she'd already written about girl-to-girl adulation. The editors were thrilled, as any fan would be.

A reporter from the New York Observer called Egan and informed her that not only had La Force and Wortham published her story, they had also published a worshipful article by a young writer who called Egan her girl crush. "No! Oh my God!" Egan said. The reporter asked her whether she had any girl crushes of her own. She was diplomatic. "The term feels—how to put this?—the generation after mine," Egan replied. "To me, I don't think in terms of girl crushes, no. I've got friends that I adore who are female. But calling it a girl crush feels a little like wearing pigtails."

—Writing Her Off
—Female Writers Don't Get Bylines—So What?
—An Open Letter to Leah McLaren Regarding Whether Women Are Funny