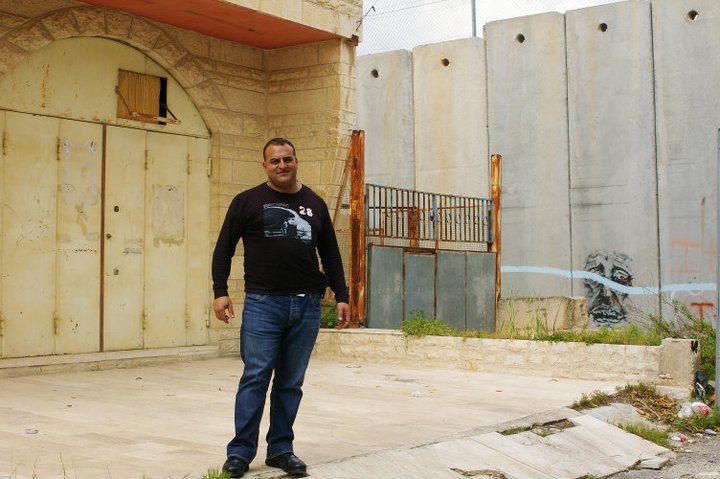 In Bethlehem was Jesus born, and Zafir lost his home. I met Zafir in an alleyway behind a taxi garage while I was checking out the Separation Wall. He offered to show me around, so I crawled into his cab, and the first place he took me was home. This is Zafir standing in front of his old home. Before the Israelis decided to enclose Rachel's Tomb, a holy site common to Islam and Judaism, this used to be the main road into Bethlehem, a busy street where Zafir lived with his family and kept a tourist shop. Now, with the wall only a few feet away and damage from incursions and fighting still evident, the street is desolate. We looked around for a few minutes and then Zafir hurried me on. Later, as we were driving, he told me a story.

The Tiger and the Donkey

One day a hunter was walking in the forest when he spotted a tiger through the trees. The tiger was very powerful and very beautiful and he did not want to kill it, so he took out his gun and shot it with a tranquilizer. The hunter waited until he was quite certain that the tiger was asleep, then he dragged it back to his village and put it in a cage.

When the tiger awoke it was very angry. Everyone from the village and from all the nearby villages and even some from far away came to see the animal that terrified them, now trapped and harmless. Some of them laughed and some of them shook their heads and some of them threw stones and other things, to make it even more angry. The tiger roared and chewed on the bars of the cage, pacing back and forth with wild eyes, and this made them happy.

"Look," said the hunter who had caught the tiger, "and you will see something very strange. For I will change this tiger into something new."

"That is impossible," the villagers said. "A tiger is a tiger, it doesn't change." But the hunter only smiled and told them to wait.

After a week had passed, the hunter went to the tiger and asked if it would like something to eat. "No!" roared the tiger. "I am a tiger and if I were out of this cage I would eat you myself!" The hunter merely shrugged and walked away.

Another week passed and the hunter came back to the cage. "Are you hungry yet?" he asked. "Yes," said the tiger gruffly, but also a little weakly, for it was very hungry. So the hunter brought it some chickens and the tiger ate them all at once.

A few more days went by and the hunter came back to ask the tiger if it was hungry. "Yes," said the tiger. "Okay, I will give you some more chickens and even a rabbit, but first you must say, 'Please.'" The tiger growled at the hunter and did not want to say it, for tigers are very powerful and should not have to beg. But in the end the tiger said "Please" and the hunter gave him the promised food.

Once again the hunter came to the tiger to find out if it was hungry, and of course it was, for more than a week had passed. "This time," the hunter said, "I won't just teach you manners, but I will also teach you respect. If you want to eat you must first meow like a cat." By now the tiger had been in the cage for a long time and he didn't know what to do, so he made a sound like a little cat. "And you must purr a little," the hunter said. So the tiger purred. Then the hunter gave the tiger a basket full of mice that were already dead.

Finally the hunter came to the tiger, and, with all the people of the village watching, he said, "I am getting tired of you. Now you must do something special for me. If you want to eat, you must first bray like a donkey."

"How can I do that?" cried the tiger. "I am a tiger, not a donkey. A donkey stands in fields and carries loads on its back, but I am the king of the animals."

"Well," said the hunter, "It's what you must do, for now you are mine and you live in a cage."

The tiger sat back down on the ground. It didn't growl at the hunter or try to argue with him any more. A few minutes passed and finally the tiger made a sad little sound, almost like a donkey. "Good!" said the hunter, and he handed the tiger a bowl of grass.

The tiger stood very still, just like a donkey, and he thought to himself, "Am I a tiger or a donkey?" And he did not know the answer.

The villagers marvelled at first at what the hunter had done, but quickly they lost interest, for many of them had donkeys at home. The hunter and the tiger were left alone, both of them wondering what to do.

—Planting Over Palestine: Canada Park in the West Bank
—Born Here: The Rise of Palestinian Hip Hop
—A Nakba of Olives: The Protests of Jayyous