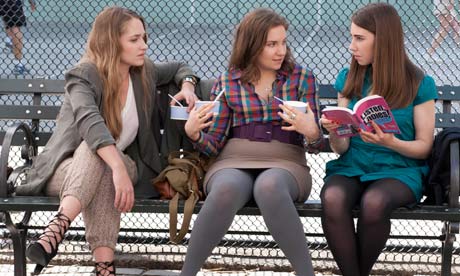 The internet is kicking and screaming in a colossal machismo tantrum and it's all Lena Dunham's fault.

Her new HBO series Girls—the second episode aired just last night—was supposed to encapsulate all of womankind, tell the world what girls are really all about (cupcakes in the bathtub, lights-on afternoon sex, opium tea) and complete feminism's mighty quest in two week's worth of thirty-minute episodes.

But it didn't do these things. Because no show ever could. And implying that any medium could adequately represent a particular gender is not only supremely simplistic and sexist—it's also the underlying problem in all of the Girls critiques that say the show isn't diverse enough. Girls was built up to be a shred of hope for a feminist-positive TV revolution. And that's kind of what it is.

But that doesn't mean it can cram every kind of woman into its narrative space. Dunham wrote a television series, not a manifesto. The critical uproar over this realization may very well show just how urgently the latter is needed, but this is not a Lena Dunham problem. It's a social problem, or at the very least, a television-industry problem.

It's cute (read: pretty hypocritical, actually) to see this sudden spike in concern over television's portrayal of women, but this fixation is propelled by the same sense of threatened dudeness that makes a show written by and about women so "controversial" in the first place. If television were an even playing field, Dunham would not be on the cover of New York magazine atop the subheading "Girls is the ballsiest show on TV," nor would the debut of this series be such a massive deal. (Where are the cultural dissections of CSI: Miami?) The critics calling Girls disingenuous because it stars four white women should redirect their frustration toward misogyny itself, not at the one show trying to fight it.

When Girls failed to satisfy the unreasonable expectations outlined by everyone but its creators, critics pounced; the lead character is an unpaid intern slumming it in a cheap-by-New-York-standards neighbourhood, when, in real life, Dunham has wealthy parents. Dunham is being called hypocritical for writing a show about a socioeconomic demographic she is not actually part of, as if it is her womanly duty to be non-fictional and to represent every woman everywhere while doing so. Wouldn't that be a fabrication more disingenuous than say, acknowledging the lead character's privilege in the show's very first scene, which is precisely what Dunham does?

And then there was the "Nepotism" meme that named the famous fathers of three of the show's four stars. (Dunham has a famous dad, too, but the meme uses her mom to make its point. Thanks for the feminism?) This attempt to discredit the accomplishments of women using their male relatives is nothing new—Thomas B. Morgan did this in a 1960 Look magazine profile of Brigitte Bardot. Jacob Brown did this in a February 2012 T Magazine profile of Lana Del Rey.

Perhaps it wasn't clear that when Dunham's character called herself the voice of a generation, it was a joke. On the Maisonneuve blog last week, John Semley wrote that "Girls feels less like a portrait of a generation than a napkin doodle of bougie urbane privilege." Later, he chortled over the show's attempt to relate with its audience by namedropping anti-depressants and deliberately placing itself in the same cultural constellation as people "figuring out" "who they are." Laugh all you want, but identifying with television characters—especially those who take anti-depressants—is not a thing that women often get to do.

Girls televised a woman who is not a size two (or a size six, for that matter) eating a cupcake, naked in a bathtub. It showed her peeling the tights off her own untanned thighs pre-sex, facedown on a couch in an apartment that definitely has cockroaches. It showed a girl gluttonously, unabashedly, shoveling carbohydrates into her mouth. It showed unwanted pregnancy and unenjoyable sex. It succeeded in portraying women in an accurate way (don't pretend you've never eaten cupcakes naked in a bathtub), but it portrayed a certain kind of woman, which is only a bad thing if you treat Girls like it just snagged the last remaining slot on television.

Feeling misrepresented and angry over the void of authentic women on television is valid. Blaming Girls, one of the few shows making an effort to fill that void, is not.

—What Do We Want From Lana Del Rey?
—n+1's "So Many Feelings" and the Way We Talk About Feminism on the Internet
—Why HBO's Girls is an Unfunny Vacuum of Pandering, Privileged Dross