I don’t have a serious history of attempting to quit. It’s happened on a couple of occasions, when I took breaks, up to a month long. But I wasn’t ever doing anything except abstaining—that is, waiting for the other shoe to drop.

Now, several days into the real, one-and-only quit, I feel done with the sprint away from the prison—an exhilarating escape, really. I’ve now slowed, and I’m peering around my new smoke-free environment, sensing the surroundings.

No. Actually, now, the prison-escape metaphor is cashed, and it’s back to the old rigmarole. I mean to say: smoking, and quitting smoking, is actually quite boring.

For a couple of days there, it was exciting to not pick up a smoke. It was deviant! It was a race and I was winning! But when the metaphors lose their novelty, it’s just about me and a stick that lights and burns but otherwise does nothing interesting. Once you piece the whole thing together and then decide not to light another one, there’s really nothing to it. There is no other shoe to drop. There is no more story. It. Just. Ends. You walk one way, and the cigarettes go another way, and like idiots, they tumble right off a cliff. There is no use stopping to assess the damage. They were already dead. They were not friends.

You don’t even need metaphor when cold, hard reality tells even more sombre truths. Cigarettes are paper sticks filled with tobacco, a species of the toxic nightshade family of plant. The nicotine smoke contains radioactive compounds. Sometimes formaldehyde is thrown into the leafy mix. Further, there are powerful imaging forces at work in the mind of a smoking woman, going back nearly a hundred years. Edward Bernays, nephew of Sigmund Freud and the “father of public relations,” categorically determined how to guide advertising and marketing efforts to get women to smoke. (You can guess what he came up with.)

So, yes, smoking is gross, and bad for your health, and bad for you. It’s stupid. Now, you can prove you’re more powerful than the mad men, because you are, and you can end it. I think it really can be as simple as that.

But, metaphor or science or not, just because it is simple doesn’t mean I don’t feel all sorts of conflict about quitting. The head of a smoker is one filled with conflict and contradiction. (And, usually, with smoke.) I must admit that, in the past few days, after the nicotine was supposed to have left my body, I have felt a dull sense of melancholy. I am now having pangs of “missing” the little devils. Did they abandon me? something inside me wonders.

That’s just one of the many voices inside a smoker: voices that provide justifications and excuses to the willfully blind, somewhat schizophrenic, quite selfish ego, which gets stoked on such attention. Other utterings include: “Smoking relaxes me” (if that’s true, it’s only because you’re addicted to a substance called nicotine—and anyway, nicotine is a stimulant), or “I don’t need this cigarette, I just want it” (oh really? then don’t smoke it). These excuses are pathetic; yet the smoker makes them all the time.

Really, having such an extended relationship with something as stupid as a cigarette is a waste of time—and one of the more joyous realizations in my new non-smoking head is that I get to come up with better things to do than smoke. I certainly didn’t need a cigarette to think thoughts. In fact, I can think more clearly now. The mundane is still mundane, and the interesting is still interesting. I can kick the can across the road without puckering on a cigarette filter. I can get stressed out by a deadline, and then deal with it by just finishing the work, breathing normally. Instead of ruining a friend’s train of thought by stepping outside to inflate my lungs with poison, I can just continue the conversation.

And again, here’s the boring truth: It was always this way.

The cigarette was happenstance. It just got a free pass into my life. It could’ve stayed on the shelf.

I do think the smoker’s habit of schizophrenic thinking endures long after the last butt is put out—and it’s part of what they must continue to work through. Allen Carr’s incredibly bestselling book, The Easy Way to Quit Smoking, does not tell you about how you will indeed miss the devil, at least a little bit. His book is all about positivity, which works. But it’s a little harder to get over than he lets on.

A few months ago I was at a bar with some colleagues. My friend Dolores, an ex-smoker, winked at me as I excused myself to go outside to smoke. “Tell him I love him,” she said. I laughed.

I laugh again, now, as I’m so fresh from the bad relationship. Dolores and I both know—"he” is no good. Still, we feel things like love, or abandonment, or missing, in relation to these objects called cigarettes.

There is always a confusion, a discord, in past and present and future, when we leave something that is close to us. We deal with this discord in different ways, but what follows in the cigarette quit is similar to what one goes through after ending a bad relationship: there is a newfound knowing, but there is also the endeavor of making sense of time misspent by somehow incorporating the bad choices into our narrative, using them as characters in a play about personal growth. In the end, it’s only narrative. The truth is we shouldn’t have picked up the bad partner, the addictive cigarettes, to begin with.

In gaining the courage to quit smoking, there is a new arrival to the entourage of voices inside the smoker’s head: the arrival of the "overpowering you," and this you is actually disapproving of your behavior, is putting her foot down, telling you something a little closer to the truth. Ideally, this overpowering you is ready to say, The buck stops here. I don’t want to do this anymore. It’s over. It is this you that can push away what Carr calls “the little monster” in your belly that feeds on the smoke.

All these metaphors tend to work for me, and I do feel like I’m now in the process of starving out the monster, stamping my foot in its eye. But I also understand that the monster was a part of me—so I’m a little befuddled, a few weeks into such a life-changing addiction bust, about what this really means about who I am.

That’s why everything feels different, why I’m a little on edge. My body-entire knows something is up: since the big quit I’ve gotten pimples all over my face—the revenge of the monster, I think. But clearly, there is a new me around. The gleeful victory I felt two days into my quit, as I rode the burst of confidence I mustered to change my path, has settled, and now I feel older. Now it’s not all victory, because I’m still uncomfortable in my withdrawal pangs, and I know it’s my fault. I now imagine all the gray smoke that I have blown in front of my face day after day, for eight years, and frown in disapproval. Kind of the way my mother does it.

I fully welcome the arrival of a new judgmental female voice, with the good sense to put her foot down, into the collection of voices inside my head.

The pluses are coming quickly: now I only cough when I think about smoking; I grind my teeth less at night; my clothes smell fresh; I’m already saving money.

The only reason I’ve made it this far is because I’m sure about my decision. Being a non-smoker is beyond a question of willpower; it’s just the way it is. It’s a steadiness I have never felt before—a kind of confidence that only comes when it’s arrived. 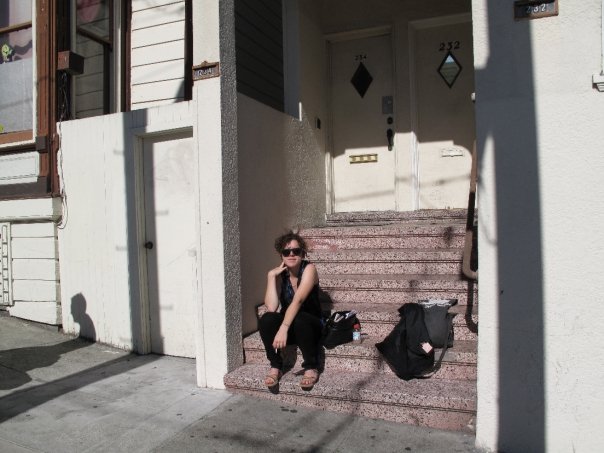 For posterity: a picture that didn’t need to have a cigarette in it. San Francisco, 2009.

—Lucky Strikes
—Up in Smoke
—That Little White Stick