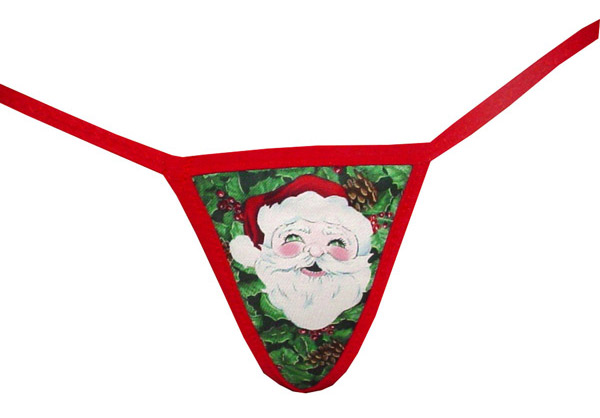 This year, for Christmas, my mother gave me a holiday-themed thong. She gave me some other presents, too—mostly books and kitchen supplies and a few rugs—but none of these gifts could hold a candle to that skimpy piece of Christmas memorabilia, a present my mother asked me to open first.

"This one," she said, passing me a bundle of pink tissue paper.

After peeling back the layers , I pulled out a small handful of fabric. "It's a thong," I said, holding the underwear up for my sister and stepfather to see. "Everyone—a thong."

Here is what you should know about the thong that my mother gave me, and why I think it was such an important gift. The thong my mother gave me is black. It has cartoon Christmas lights printed across the front, and the top of it is rimmed with lace. At the front, there is also a tiny bow, something common in underwear sold at La Senza, as is having obvious sexual innuendo written across the bum.

The thong looks like something that a fourteen year-old girl might wear when trying to seduce her partner; truthfully, there is not much seductive about it. It's ugly, and it has a naïve sense about what it means to be sexy (make it neon? add a bow?). And yet the garment does carry a distinctly sexual message, one from my mother: she knows my sexuality exists.

The extent to which your parents acknowledge that you are a sexual being usually depends on factors like your class, age, gender and religion.  Most important, though, is the general perception of sex in your family: whether it's seen as something to celebrate or something that tears lives apart. In my own family, the former view of sex prevails, though you wouldn't catch my mother boasting about orgasms at the kitchen table or leaving KY Jelly around the house. Rather, the view of sex under her roof has always been that it's an inevitable fact of life, one you should prepare for by taking the proper precautions: using protection, getting tested and keeping to a minimum the amount of it you have with total strangers.

Growing up, this approach made it easy to have those difficult conversations about sex with my mom—the same conversations that my peers dreaded having with their own parents. My friend Alanna talks about how, when she was in high school, her father would insist that she keep her bedroom door open anytime a boy came to visit. Once, suspecting that a male guest was putting the moves on his daughter while the two of them watched a movie, Alanna's father crept up behind the pair with a loud vacuum, making both teenagers jump. For Alanna, talking about sex with her father was always out of the question.

By contrast, when I was seventeen and told my mother that I had a new boyfriend, she handed me $20 and told me to get the pill. I wasn't sure she even knew the guy's name.

But the Christmas thong is different. Unlike birth control, the underwear she gave me isn't meant to protect me against the negative consequences of sex—it actually encourages me to enjoy it. With its frills and flourishes, the thong goes beyond its functional purpose of eliminating underwear lines, and winks at its potential audience. "Happy Holidays," it hints, in the dirty way.

Contrast this to the droopy, innocent bloomers my mother gave me as a teenager (I'm now twenty-four), and you'll see that the message she's sending me about sex has evolved. The only-if-you-have-to attitude of those old Fruit of the Loom packs has been replaced with the thong's mantra: "Go have fun." There's something very freeing, very adult, about that.

Above all, what gets me most about this gift—what touches me in a way I'd never expect to be by a cheap piece of lingerie—is this: it shows that my mother has stopped thinking of me as someone who can't face the risks of being an adult. Instead, I can be trusted to weigh these risks on my own. "Get out there," my mother's gift tells me. "You don't need me to hold your hand."