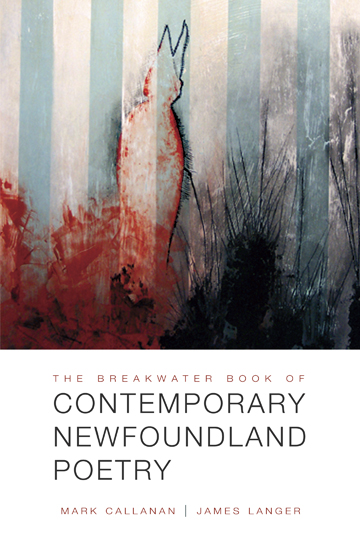 In this recent anthology, Mark Callanan and James Langer gather together the work of eleven of the province’s most recognized poets. Below, Sarah Neville and Danny Jacobs discuss the collection, which features contemporary work from 1964 to the present; charting the evolution of Newfoundland poetry since the passing of its most famous resident writer, E.J. Pratt.

Sarah Neville is an assistant professor of English at West Virginia University, where she teaches courses in book history, editorial theory, and research methods. She tweets @EffectDefective.

Danny Jacobs grew up in Riverview, New Brunswick and his poems have been published in a variety of journals across Canada. His first collection of poems, Songs that Remind Us of Factories, will be published with Nightwood Editions in the Fall. He works as the librarian in the village of Petitcodiac, NB.

Danny Jacobs: I’ll begin by addressing the elephant in the room—the book’s lack of an introduction. Maybe I like to be coddled by my anthologists, but I’m a sucker for a hefty essay laying out why we need this particular collection of poets. In a recent CBC interview, Langer and Callanan told listeners that there were no back-door dealings or last minute trades when disagreements arose. Instead, they assured us, they simply made arguments, and the stronger argument for a poem or poet won out. What a tease; I would have dearly loved to see some of that argument bleed into rousing opening prose.

Perhaps they wanted their choices to speak for themselves. And while this book is well-curated—at just over 200 pages, it’s trimmed of the fat of lesser poets—I wanted Callanan and Langer (both excellent poets themselves) to forcefully and compellingly tell us what they were up to. Do you agree? Am I being too editorially needy or is it incumbent on anthologists to clearly state their reasons for a book, and for the work included therein?

Sarah Neville: I totally agree: this work suffers from its lack of a critical introduction.  It’s not about being “coddled”; anthologists and editors have a responsibility to their readers (and to their chosen texts) to explain their choices, to outline for us (and for them) the terms of value that governed how and why they created what they did. In an interview, Callanan rightly critiqued the all-too-common anthologists’ tendency to publicly lament what they didn’t include in their volume, as though giving a shout-out of somebody’s name is the same thing as giving them page space. These apologies frequently happen in introductions, so I can understand not wanting to use one’s intro essay to do that, but the book itself needs justification beyond the 100-word “Editors’ Note” telling us that the criteria for possible inclusion were “any poet who developed—either by birth or residence —a strong relationship with the island of Newfoundland prior to the publication of their first full-length collection of poetry”. I want to know more about this tension between residency and birth within the Newfoundland Poet’s imagination, and more too, about the editors’ conception of the term “the island of Newfoundland.” Do they mean NFLD culture? Its landscape? Its history? All of the above? What conception of regionalism is playing out here? What makes the contemporary NFLD poet somehow distinct from the contemporary SK or ON or BC poet?

DJ: Right—given that we have no introduction, can the reader follow shared stylistic and/or thematic threads? Lexical bravura? An Anglo-Saxon inflected hardness? A preoccupation with identity? A propensity for poems to dwell in harsh, almost post-apocalyptic landscapes? I don’t believe one should boil a clutch of poets down to the gruel of common denominators, but in this context one is compelled to find overarching harmonies. What should we do with this?

SN: I feel like in the absence of a critical introduction, readers are left with the material object of the text, reading the book qua book, the thing qua thing, left adrift to sort it all out for ourselves. In some ways, this is a brave choice, since the critical introduction often serves as a kind of apologia that instructs readers of the “right” way to interpret, the “right” way to read. Callanan and Langer, I think, are trying to signal their refusal to mediate the terms of contemporary Newfoundland poetry by forcing readers to consider their anthology on its own merits, as if they haven’t already mediated the poems by virtue of selecting them for this new context. Fortunately, the Breakwater book is a beautiful, thoughtfully designed object, and its paratextual or “non-authorial” features give us some insight into the editors’ minds. The book’s prologue offers a quotation from the London Times’ obituary of Pratt dated April 28, 1964, forcing readers who read the text consecutively to understand that “contemporary” here means “after Pratt.” The “Editors’ Note” also explains that the poets are ordered chronologically based on the publication dates of their first collections—the editors thus implicitly telling us to read the poems in the order in which they’ve placed them in order to find out the stylistic and thematic threads. Of course, my first impulse as a disobedient reader was to flip to the alphabetized index of titles where I note deep threads of Christian allusion, requisite ports and coves, bevys of nouns but fewer verbs and phrases. Not quite enough for a clear sense of common denominators, but a start.

DJ: I’m glad you mentioned the prologue; I think there’s a hint here in how Langer and Callanan want the reader to perceive the progression of the book. The obit is significant not only for its characterization of Pratt as a poet of the whole country; it’s also telling that the dispatch comes from across the pond. Here is a London publication (The Times, no less) lauding a Canadian poet not as some backwater Bayman or rural curiosity but one who took “the country as a whole… into his scope.” The prologue is certainly a rebuke against petty claims of regionalism. And I think the book does an excellent job in plotting an evolution of increasing poetic individuality in respect to each writer’s relationship to Newfoundland. Pittman and Dawe expend a considerable amount of psychic energy worrying over identity; the shadow of the British Empire darkens their poems (Pittman’s “The Border” and Dawe’s “Edwardians (Old Photograph)” come to mind) and the continual use of Newfoundland tropes suggest a kind of anxiety of place. Don’t get me wrong, there are some beautiful things in these earlier poems. Dawe’s hardtack Saxonisms can be stunning. Stanzas like “A sudden fog/and sea-winds/bend the sting-nettle” (“Abandoned Outport”) beg to be read aloud; however, their peddling of a rustic version of Newfoundland can sometimes seem like overcompensation.

SN: Agree completely about the old colony anxieties at work in the earlier poets and poems (maybe “anxieties” is too strong a word here...tensions? Unexamined assumptions?), though I wonder how many of these elements have been deliberately selected and refined through editorial anthologizing. Dawe’s claim in the “Top of the World” that “In spirit we were not / so different really / from old, cautious cartographers / who sketched in sea monsters” met beautiful juxtaposition through its judicious placement beside the “barbed, metallic cord, / not really symbolic / in this landscape yet” of his “Edwardians”. Coming just a few pages past Pittman’s “demons / who lived so terribly / in the haunted hours of your sleep”, I wondered if Langer and Callanan were deliberately setting us up for something, a familiar New World/Old World dichotomy remastered for The Rock. Think that’s it?

DJ: Yeah, maybe—by contrast the later writers seem to perceive place as still central, but not the only thing that should define a voice. In other words, if region for the later writers doesn’t matter less, it at least doesn’t overshadow the poems themselves. For a formal master like Crummey, Newfoundland  may be used as a jumping off point, but the poems seem more defined as poems, not Island poems. Yet I think the collection does track common music that connects early poets like Pittman and Dawe—all coves and cod—to a thoroughly cosmopolitan poet like Babstock, who, with coolly elusive stuff like “In the set, / called Phi, of all possible physical worlds / resembling this one, in which, at time t, // was written ‘Is he free who is not free—’ / and comes the cramp” sounds more New York than outport.

SN: So even without an introduction explicitly saying so, the orientation of the anthology itself tracks a clear narrative of poetic development through the volume?

DJ: That’s part of it—even with Dalton’s philological spelunking we don’t see a poet scrambling to define herself against looming nations (as perhaps the earlier writers did); she is merely comfortable enough in her island identity to make new noise with Newfoundland slang: “Moll doll his chin;/ Her hair birch-/Broom-in-the-fits”. Perhaps the apotheosis of this individual growth comes in the sophisticated voice and ear of Ken Babstock, who, while occasionally referencing Newfoundland in this selection, is cosmopolitan (there’s that word again!) in his temperament. So maybe one way of looking at this book is as the story of a region’s poetics moving from provincial place-saturation to a more cosmopolitan/ global/ sophisticated/ worldly (call it what you will) voice.

SN: I’ll buy that. But I wonder if part of this modern cosmopolitanism is derived from a very explicit form of intertextuality that feels to me a little like a remixing of that old colonized export anxiety. McGrath’s “Love and the Swan” responds to Yeats, Michael Crummey’s narrator’s “On a short haul flight to Boston / with The Selected Paul Durcan”, while Babstock finds marginalia in a poem by John Clare. I was struck too, by Steffler’s “Dividing Island” that laments “the scattering, that to be lived / through too, ache of a landscape / people have always had to leave”— is the origins of the cosmopolitanism of contemporary Newfoundland poetry? Is its poets’ willingness to see themselves both of a place and in the wider world largely the result of a region’s shifting demographics? Or is this too simple a suggestion?

DJ: I think there is something to that. There is lots of departure in this book, of “islanders/ leaving their island” (Pittman). And even with the later poets, there is a sense of having left (lost?) something: “I talk still like I’m from nowhere, or Ontario” (Babstock). So I would agree that even if the later poets are more comfortable in any idiom, they still may exhibit symptoms of what you call “that old colonized export anxiety.” So perhaps we can say that the book is successful in giving the reader a compelling narrative of one region’s poetic development, but the anxieties of place never go away. Thanks for the insights, Sarah.

—Captain Poetry
—Under the Pudding Skin: A Conversation about Bruce Taylor
—Interview with David McGimpsey