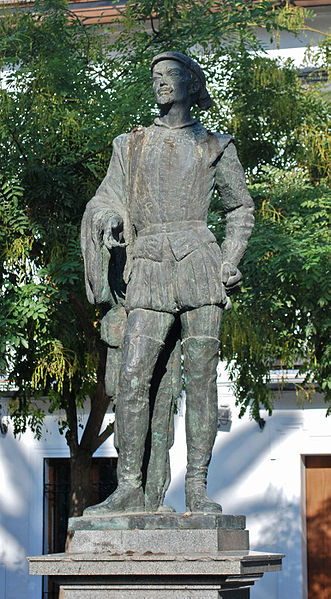 Statue of Don Juan in the square of Refinadores in Seville.

The only part of the movie I'm interested in is the title—it's a play on Don Juan, fiction's most famous ladies' man immortalized by the eponymous Lord Byron poem.

Most people mispronounce the name of Byron's hero. This seems like a good time to set the record straight. Usually you'll hear "Don Wan." It's actually pronounced "Don Jew-One."

I know: weird. But look at the words Byron rhymes with Juan.

Mine's Johnson, and my comrade's Juan
The other two are women, and the third
Is neither man nor woman.' The chief threw on
The party a slight glance, then said, 'I have heard
Your name before, the second is a new one:....

Never does Byron rhyme Juan was a "wan"-sounding word, like yawn, or dawn.

The awkward pronunciation is part of a running joke in the poem, in which the narrator anglicizes foreign words, the irony being that the author of an urbane tale about a globe-trotting Lothario is actually a provincial rube.