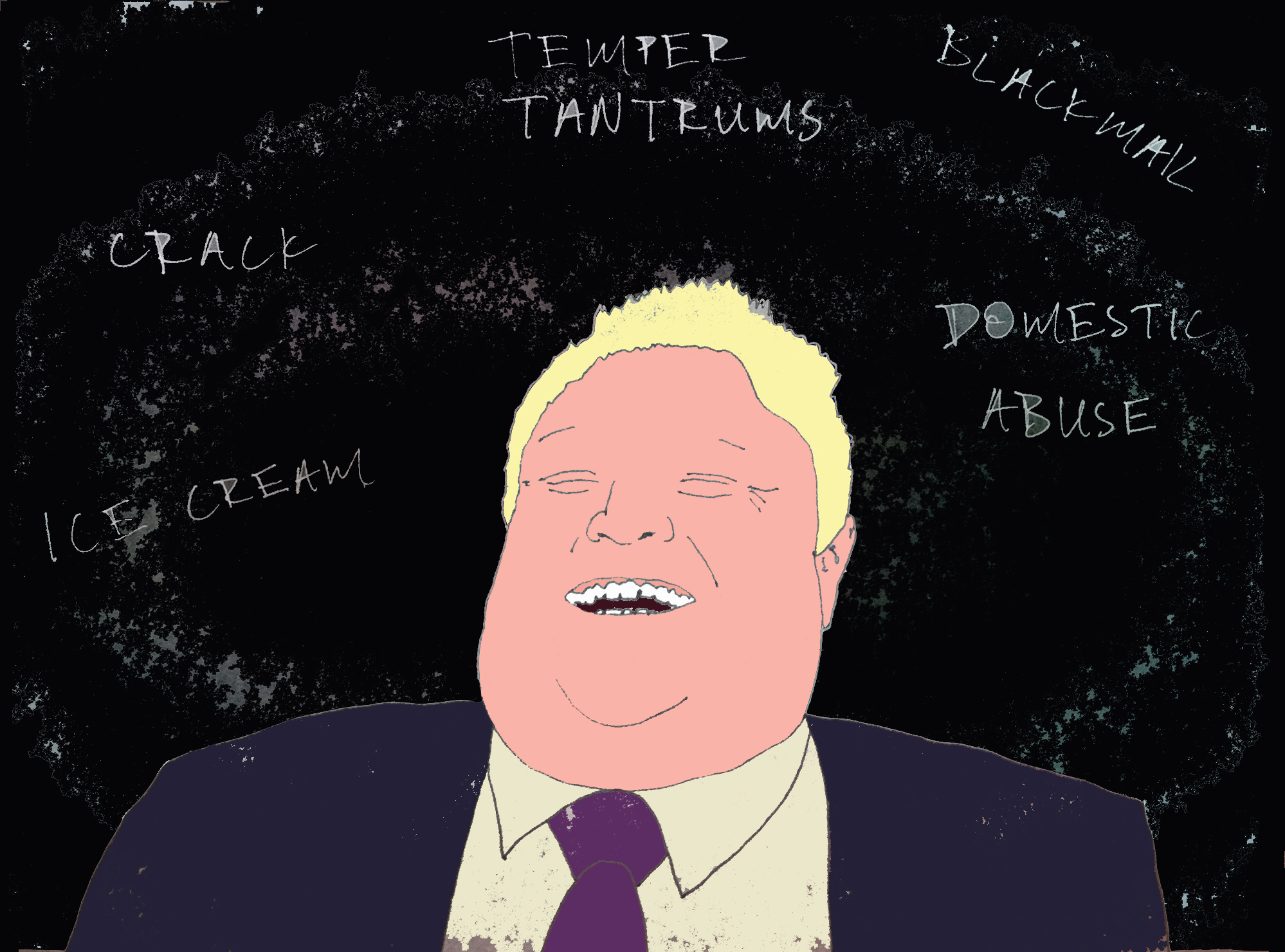 The mayor's comical idiocy has given cover to his abusive behaviour.

On January 1, Rob Ford registered to run for re-election in a race which, in spite of everything, he is by no means fated to lose. For the past several months this very real possibility has haunted our city like an enigmatic plague, because there seems to be no feasible way to negotiate with the citizens of Ford Nation, even as they drive through our streets and walk among us like Dr. Jekyl. Just imagine for one moment the international shame we’re in for if he wins again: sixty percent of Torontonians bury their face in the sand as Ford—medallion-clad and crimson-faced—cackles with ecstatic, Caligulan joy.

Most of us would be hard pressed to even think of a less compentent mayor than him, but pathetic though he may be, he is not entirely charmless. In these past several weeks, I have been struck by how many of his sworn enemies have confessed to feeling sorry for the guy. Because, as we have gained a perspective of unprecedented intimacy on the mayor’s desperate private life, his stubborn insistence that he will be elected to a second term has only underscored his sincere belief that he is doing what’s right for the city. It was hard even for me not to feel a stab of sympathy when, as council spent the afternoon neutralizing the mayor’s office, he stood up and plaintively snivelled, “In this world, there are more poor people than there are rich people and I side with the poor people."

I am tempted to believe that he believes himself when he says stuff like this. For one thing, I think he’s right that a lot of poor people in this city do pay too much in taxes, and that notion has scarcely been acknowledged by any of his opponents. (In fact, a recent study by the C.D. Howe Institute found that poor Canadians actually pay more taxes per dollar earned than the rich.) For another,  it’s fair to say that he appears more at ease around low-income constituents than any other mayor in the city’s history; he chats casually with homeless buskers outside of City Hall, and he feels comfortable chilling with Somali drug dealers in high rise apartment buildings on the margins of the city. Indeed, his total lack of pretence often presents as adorably infantile. Take, for instance, his peeing in the street in broad daylight or his impetuous gravitation towards Dairy Queen, or his habit of using both hands to hold the plastic cup from which he sips milk during a council meeting.

But for all the mayor’s fetching idiosyncracies, there is one particular element of his behaviour which continues to loom odiously over the conversation, and that is the apparent reality that he is chronically abusing—and quite possibly assaulting—his wife.

There have, in fact, been so many trouble calls from the Ford household over the years that the cops maintain a standard operating procedure of dispatching a senior officer to the scene. The mayor was charged with assault and uttering a death threat against his wife in March of 2008, but the Crown withdrew the charges, citing inconsistencies in Renata Ford’s allegations. In late December of 2012, Renata Ford had an encounter with the cops during which she had cuts and bruises to her limbs and face. Suspecting domestic abuse, the cops asked where the marks had come from, but she declined to answer them. They took her to a hospital and passed their report on to detectives, but again no charges were laid. On August 27 of this year they responded to a domestic assault call, but again, no charges were laid. Documents detailing the police investigation of the mayor cite several other cases of physical abuse, as well incidents of alleged sexual harassment towards municipal staff.

There are many reasons the media hasn’t paid much attention to this pattern of violence. As Rosie DiManno pointed out in her story on the subject, Ford herself declined to pursue any charges following last year’s incident. The Star and other outlets have refrained from discussing the story out of respect to her privacy, and the police cannot press charges if she is uncooperative.

But since reading DiManno’s article, every erstwhile-jubilant conversation about the mayor has had a very dark edge for me. It strikes me that the permission of this probable violence on the part of our social system is sinking us further into a pit of demoralized confusion and cynicism. Regardless of his notoriety, the mayor does hold some sort of moral and political sway in society. His blatant racism, homophobia, and misogyny can only serve to excuse and normalize the racism, homophobia and misogyny, which, for all its self-congratulatory liberalism, this city already has in spades. A friend recently told me that he was at first surprised by the scale of international attention the story has received. But his surprise, in turn, reminded him of the degree to which we have become inured to the insane logic of the mayor’s own mind. Of course this is international news. Politicians never act like this. This is actually totally crazy! Just as the mayor and his right-wing dad and his formerly drug-dealing brother and his white supremacist sister and his violent other brother all seem to have kept each other comfortably out of touch with reality, it is as though we too have started losing track of what’s crazy and what isn’t.

If nothing else, the Ford saga has highlighted the total hypocrisy at work in Canadian politics today and that is precisely why it should not be treated as an isolated incident. Rates of domestic abuse in Canada remain at staggering levels, with over 40,000 violent incidents reported to police each year, while the vast majority of incidents go unreported.

It can sometimes appear as though Rob Ford is so stupid and irreverent that he has uniquely managed to slip through the cracks of our legal system, when in fact he possesses the very same privilege that is shared by every other wealthy white male in North America. In that sense, I sincerely hope that this saga awakens more than a few people—and, for that matter, institutions— to the problems of violent privilege that pervade our society, rather than excusing them.

—Growing Up with Addiction: An Open Letter to Rob Ford's Children
—The Ford Brothers and the Complicated Politics of Class
—Why Cracking Jokes About Rob Ford Won't Solve Anything