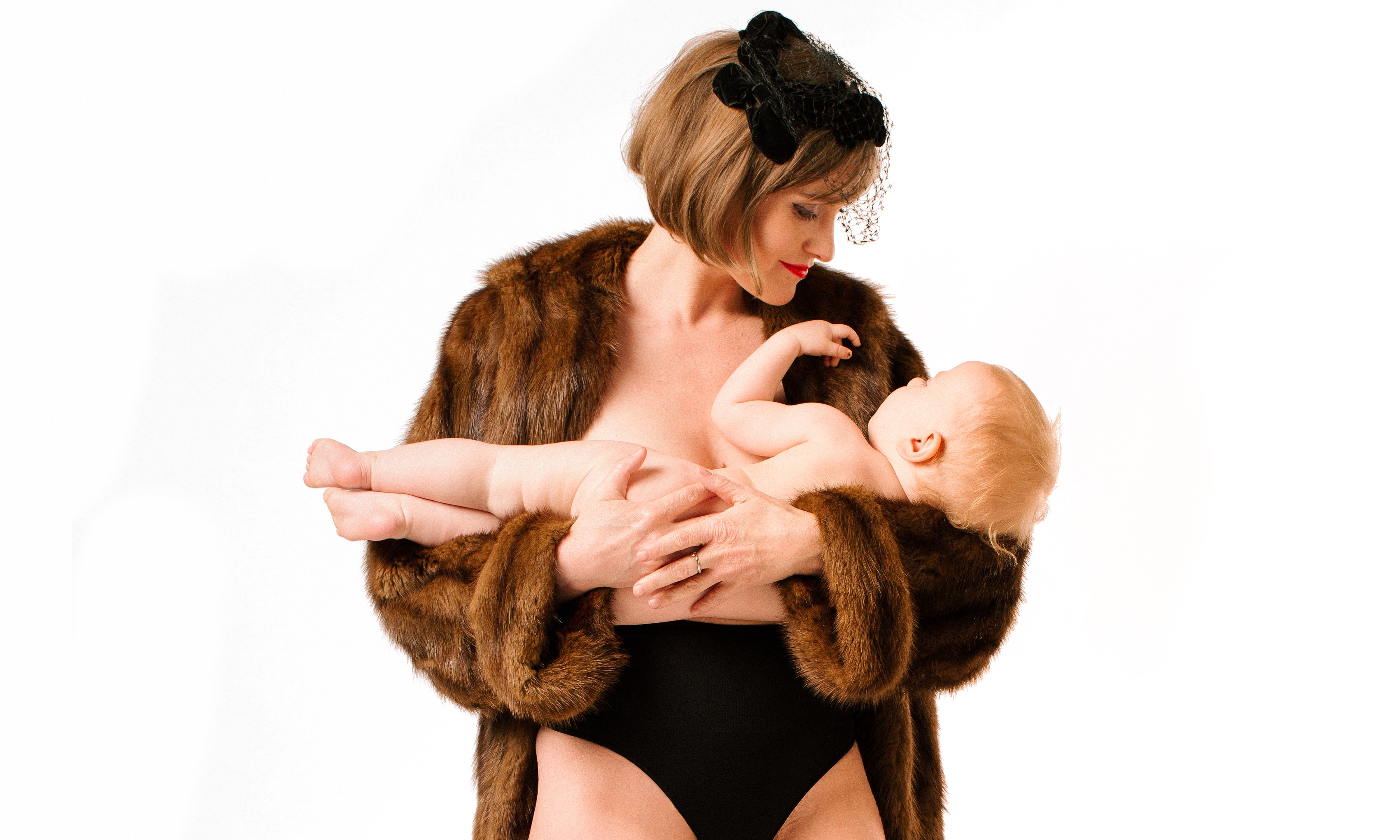 Fringe superstars and real-life married couple Stéphanie Morin-Robert (of the Merkin Sisters) and Alastair Knowles (of James and Jamesy) take residence in La Chapelle this year with two new productions, INK and Eye Candy, plus an old favourite, Morin-Robert’s Blindside. The pair are also showcasing another recent production, namely their two-year-old daughter, Olive, who makes a brief appearance in Morin-Robert’s Eye Candy, an otherwise one-woman show about the joys, pangs and terrors of childbirth.

Those terrors come mostly from the fact that Morin-Robert lost an eye as a result of cancer, specifically retinoblastoma, when she was a child. That her great-grandfather also lost an eye gave rise to the fear that she would pass on the gene to her baby. As it turns out, there’s both unexpectedly good and truly appalling news when it comes to questions of family legacy. I’ll avoid spoilers, but this climactic revelation is no doubt one of the reasons that her family, as Morin-Robert informs us, is mostly not on board with her performing such a nakedly honest show as Eye Candy.

As you can perhaps tell from the titles of the two shows Morin-Robert is performing, she makes no secret of the fact that she uses a glass eye. In Blindside, in fact, she talks about how, as a coping mechanism while growing up, she transformed her disability into a superpower. And throughout Eye Candy, she’s still proudly flaunting her empty eye socket.

Squeamish audience members who think they can avoid seeing too much by sitting a few rows back should be warned that Morin-Robert projects the big reveal onto a giant screen in livid technicolor. The camera is also used to zoom in on various body parts (including this eyeless slit) to create, with help of stick-on googly eyes, a grotesquely funny puppet of a demanding baby. At one point, Morin-Robert sticks the googly eyes over her lactating nipple to mimic Baby throwing up. This last detail, by the way, reveals that the performer is pregnant again—a sequel in the making?

Most of the stories in the show revolve around giving birth. I’ll admit I sometimes felt like I was at one of those dinner parties attended by lots of recent parents. The subject turns to baby-making and you’re getting one or two anecdotes too many about weird food cravings, wacky midwives, the adorable ineptitude of male birth-partners and inevitable comparisons to the body horrors of The Exorcist.

But Morin-Robert has a knack for the vividly told and the arrestingly re-enacted. Her description of the crowning stage being like crouching over a slow fire is one that will stay with me for a while. And she spectacularly transforms herself into a roaring, city-stomping behemoth when it’s time to push.

She also has a knack for evoking near-tragedy and absurd comedy in the same breath, such as her story of a potential assault in a dark alley that’s thwarted by her projectile vomiting, or when a doctor attending her suspected miscarriage turns out to be a superfan of the Merkin Sisters. (Morin-Robert’s performing partner in that show, Ingrid Hansen, who also happens to be the director of Eye Candy, was supporting her through this traumatic episode.)

What also makes this show special is the climactic coup-de-théâtre during which two-year-old Olive toddles onto the stage. Nothing can quite prepare you for this surreal (and impossibly cute) stage picture, as mother and child face each other across the expanse of the stage and against the backdrop of a projected image.  After the show, a friend said he’d even wondered, initially, if this was just another clever feat of puppetry. As it turns out, it’s theatre’s gain that Morin-Robert ignored the advice of Noël Coward’s famous ditty, “Don’t Put Your Daughter on the Stage, Mrs. Worthington.” 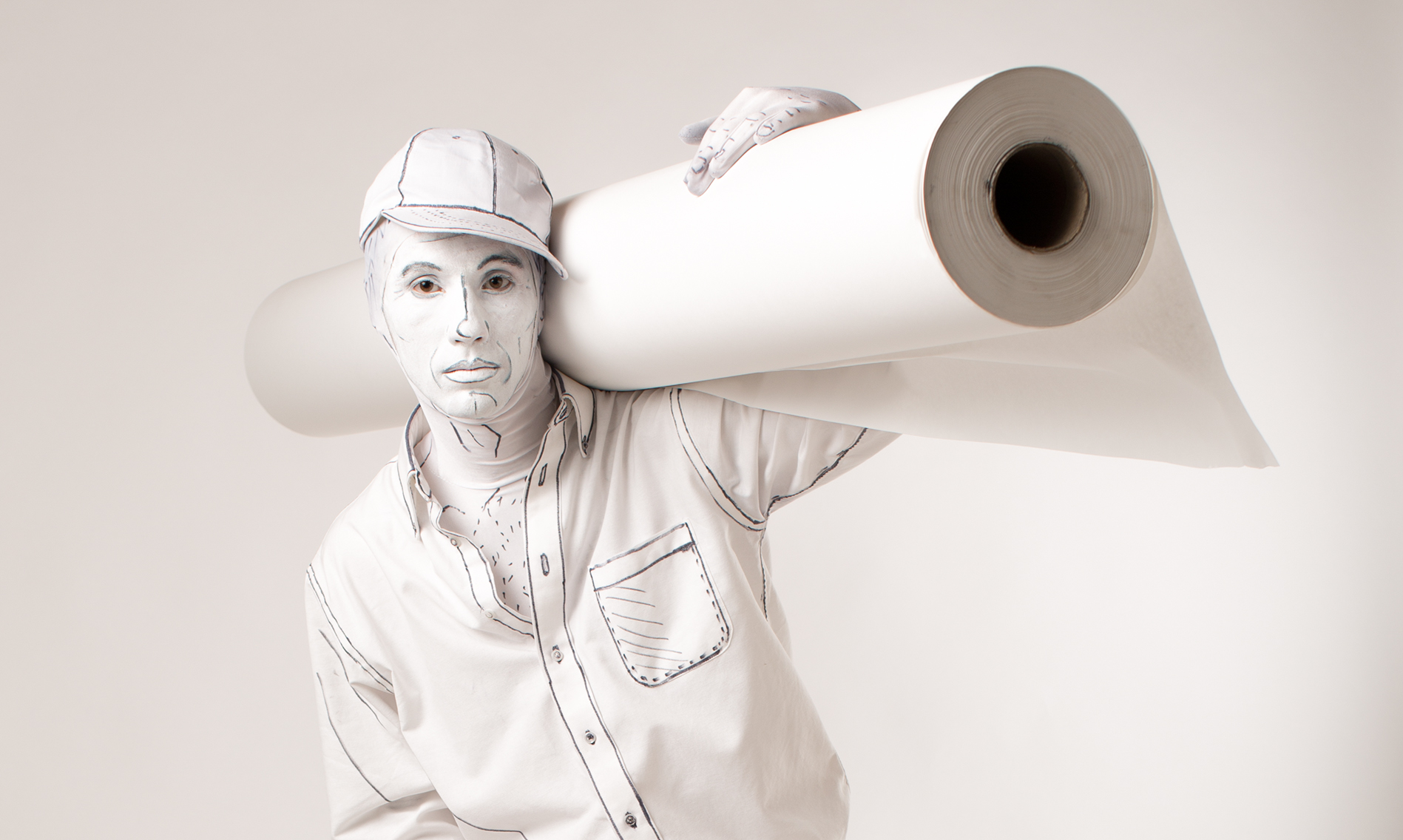 Alastair Knowles transforms himself into a living cartoon in the sketch-show INK. (Photo credit: Thaddeus Hink)


Also watching from the audience was proud dad Alastair Knowles. He didn’t have much time to bask in the moment, however, as he was next up with his own show, INK, which Morin-Robert directed. Knowles has startlingly transformed himself into a living, old-school-style cartoon, using a white bodysuit and makeup to create crudely drawn facial features and crease marks on his shirt. At the back of the stage hangs a nearly thousand-square-metre roll of blank paper.

Knowles initially teases us that the show will consist of him enthusiastically sketching faces of audience members, accompanied by Chopin sonatas and jazz percussion. This tests the audience’s patience for a while before things begin to accelerate, the tempo gets manic, and we’re into the sketch-artist equivalent of the “All work and no play” moment from The Shining. At this point, the audience is grinning in relief that, yet again, Knowles is in the process of delivering something special, as you’d expect from one half of the wonderfully absurdist duo James and Jamesy.

In a scene reminiscent of the pas-de-deux with a newspaper in the film The Red Shoes, Knowles performs a waltz with an animated form that rises up from the scrunched-up paper around him. Its only indicator of humanity is a hastily scrawled smile, but that’s enough for Knowles’s desperately yearning clown, who’s attempting to conjure up, with pen and paper, a world with which he can connect.

In the James and Jamesy show High Tea, Knowles and his performing partner Aaron Malkin engulfed the audience in an imaginary ocean of tea. Here, with the aid of two industrial fans, Knowles creates a tsunami of paper which rolls over the audience then rolls back onto the stage. From the resulting chaotic jumble, Knowles miraculously finds that simple, enchanting smile he drew for his dancing partner.

The roll of paper has reached its end, and Knowles stands alone like the last man in a world that’s used up all its resources. Yet the human warmth he projects onto that simple, inky smile might still be enough. Or not. It’s an ambiguously haunting final image for this visually stunning show.

For more information about these shows, and about the Montreal Fringe in general, visit montrealfringe.ca