The joys of friendship, with all the attendant goofing around, are celebrated in two remarkable shows, Finale and Somos, currently playing in the Montréal Complètement Cirque festival. I’d say the warm summery companionship wafting through both shows makes them relatable—except I don’t remember balancing vertically on any of my mates’ heads, as happens in Somos. Nor do I remember leaping through one of my pals’ perfectly looped legs like a tiger jumping through a hoop, as happens in Finale.

Finale, from Berlin-based company Analog, is a confetti-strewn blast of a party. Shots of vodka are handed out to the crowds. The performers occasionally mingle with the audience (one of them shoving a long screwdriver up his nose before affably proffering it to my wife). Scintillating music plays throughout, courtesy of soulful vocalist Imani Pearl Williams (alternating nightly with Kesia Clemence Quental) and drummer Lukas Thielecke, who does his thing in an eye-catching oval aperture at the back of the stage.

Analog aims to replicate the atmosphere of a Berlin-style underground cabaret, which might seem a tall order on the relatively remote proscenium stage of Théâtre St-Denis. But such is the easy charm and charisma of the performers that you forget there’s a distance between you and the wild times taking place up on stage.

Of course, there is a distance between us. It’s stretched between what I can only describe as the near-superheroism on stage and us mere mortals. One of the many highlights sees Thielecke joining Bertan Candelback in a kind of Duelling Banjos, except the duel is between drumming and juggling. As Thielecke lays down a beat, Candelbek responds to it with an astonishing cascade of perpetually falling balls adding their own complementary rhythm.

A quieter but no less amazing sequence sees Florian Zumkehr, the founder of the company, balancing one-handed and, by such means, hopping from one pile of precariously stacked books to another.

The performers often take familiar circus acts then propel them a quantum leap further. For instance, a Chinese pole routine is made much more tricky by having a corresponding pole scything around it so that the elevations and falls have to be timed just right to avoid collision.

It all ends with a festival of hoop-jumping—backed by disco lights, confetti and pounding music—involving audience volunteers and ever higher, more impossible leaps, including that aforementioned one where Manda Rydman provides a hoop with one of her legs. It’s just one of many astonishing astonishing moments that compelled the audience to a thunderous standing ovation that just wouldn’t quit—until, that is, the troupe invited them to the stage for more vodka shots. 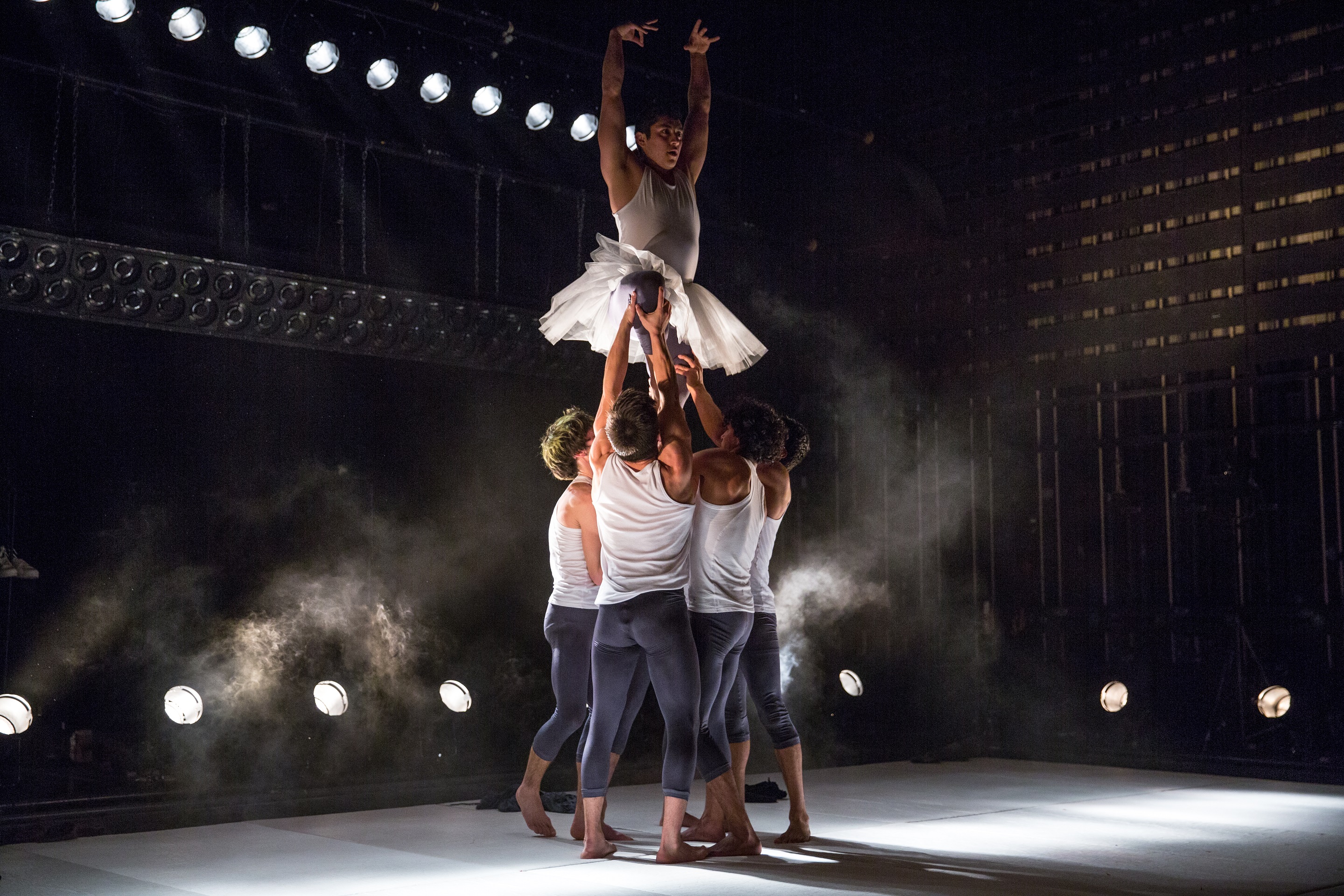 Meanwhile, over at TOHU, the circular circus theatre on Jarry Street, France-based Colombian company El Nucleo provide equally flabbergasting acrobatic exploits based around mutual trust and friendship. This time, though, there’s a slightly more somber atmosphere surrounding it, not least because seven pairs of trainers hang at the back of the bare stage—and there are only six performers.

Somos, which translates as “we are,” is a testament to lifelong friendships on the streets of Bogotá. But it’s also a lament for one friend who didn’t make it. Exactly why isn’t made clear, though one hint may be in the shadowy opening sequence during which powder pellets (the kind used to give acrobats a better grip) explode off bodies while the sound of machine guns echo around the room. Could it be that their friend was a casualty of street unrest? The fact that the sequence quickly morphs into a boyish game suggests perhaps not. Another sequence in which a performer pushes himself to physical exhaustion—and perhaps worse—offers the possibility that the rigours of circus training were the cause of this absence.

Despite these serious moments, sometimes backed by the raw melancholy of Nick Cave songs on the soundtrack, Somos is ultimately a joyous celebration of friendship, both among the six performers and the one they left behind.

The physical feats on display in both shows are often almost literally beyond belief. But equally noteworthy is the way both shows demonstrate how mutual trust and support are at least as important as physical prowess when it comes to achieving those feats.

For more information about these shows and about Montreal Complètement Cirque in general, visit montrealcompletementcirque.com