In the late 1910s, a group of painters met at art school in Montreal and founded the Beaver Hall Group. Unlike most contemporary groups, Beaver Hall included a fairly even proportion of men and women, all painting in modernist styles; one of its founding members was Lilias Torrance Newton, a skilled portrait artist and upper-crust Anglo Montrealer born in 1896.

Torrance Newton married a stockbroker while in her early twenties, but she tired of him after he had trouble coping with the stock market crash. At the time of their divorce, they had one son—nicknamed “Winkie,” he appears in a couple of Torrance Newton’s paintings.

In 1927, Torrance Newton’s “unusual lifestyle” earned her a profile in Saturday Night magazine. By the 1930s, she was earning a living painting commissioned portraits and teaching alongside fellow Beaver Hall painter Edwin Holgate at the Art Association of Montreal.

Unlike the Group of Seven, Beaver Hall painters generally focussed on portraiture and city life. In fact, Torrance Newton painted some members of the Group of Seven, A.Y. Jackson and Lawren Harris, and—no one’s perfect—she was the first Canadian commissioned to paint an official portrait of Queen Elizabeth and Prince Philip in 1957. For many decades, she was the preeminent portraitist in Canada.

While Torrance Newton’s work isn’t currently as well-known as Emily Carr’s or her fellow Beaver Hall painters Prudence Heward or Edwin Holgate, much of it does appear online, either as thumbnails illustrating gallery holdings or as copyright-flaunting proliferations across Imgur and Pinterest. Between 2014 and November 2019, however, one Torrance Newton appeared online only in a… slightly altered form: 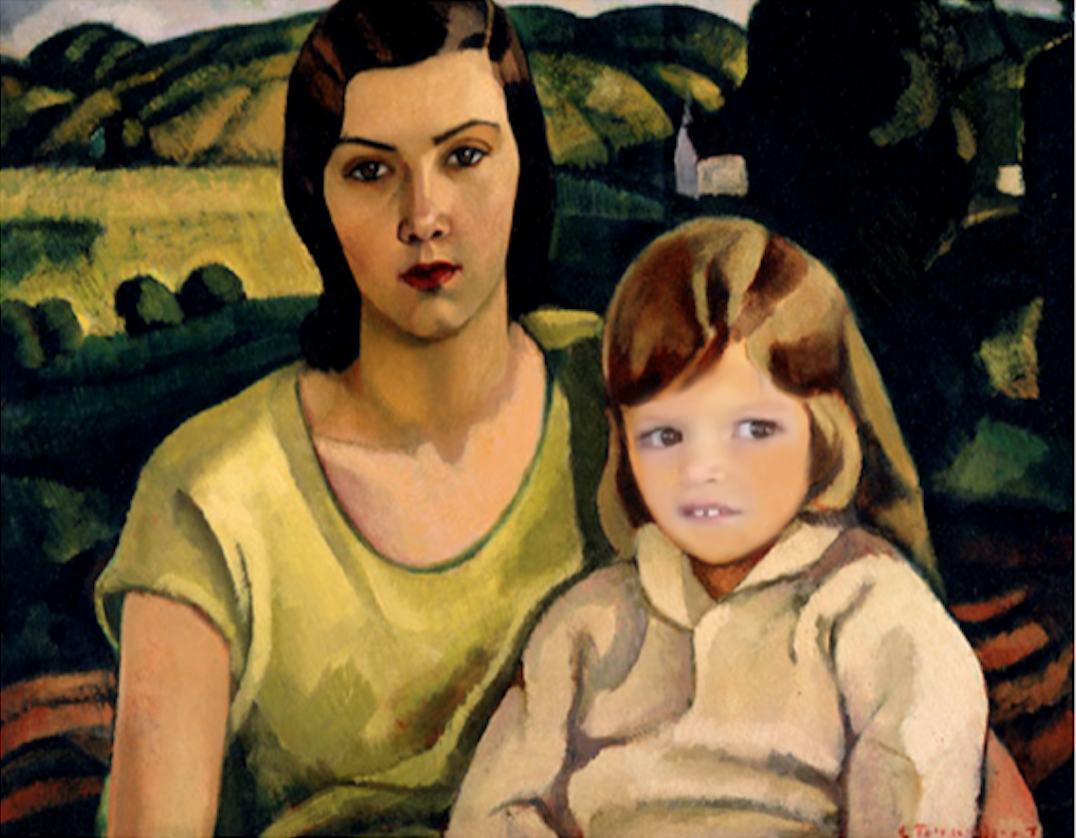 The image was originally posted to Imgur, a community-based website where users share images and memes, and was then featured several other places, including on the art history website of Québecois resident Claude Dupras. Dupras, incidentally, was single-handedly responsible for bringing Fidel Castro to Montreal in 1959 (then a member of Montreal’s Junior Chamber of commerce, he extended the invitation as a publicity stunt for the organization’s toy drive. He was shocked when Castro responded). The painting joins the Mona Lisa, “American Gothic” and “Girl with a Pearl Earring” as paintings memed, more or less well, with a video still of a wary, car-seated toddler named Chloe who’s just been told she’s going to Disneyland. The meme first appeared online in 2013 via a Youtube video Chloe’s mother uploaded, and over the next few years, the little girl’s face became one of the internet’s most popular memes.

Unlike its more famous counterparts, the original Torrance Newton painting probably remained mostly anonymous to anyone viewing it; its name was missing from its online, memed iteration, and it didn’t go viral like some of the other paintings that had been transposed with Chloe. An observant art fan who wanted to see the girl’s real face would first need to do some work to figure out what the painting was called, and who now owned it. Reverse Google and TinEye searches produced no results, so andrea posted a call to help solve the mystery on Twitter, and Paige, an art history graduate, was immediately hooked and willing to help.

Many museums keep their holdings opaque, which can make searching for specific lesser-known works feel futile, especially with the web’s tendency to erode provenance. The fastest course of action is usually to bypass digital databases in favour of human ones like Eric Klinkhoff, a second-generation gallery owner in Montreal and a specialist in the appraisal of eighteenth-, nineteenth- and twentieth-century art.

Klinkhoff, who once sat for Torrance Newton while a student at McGill, knew her both as an artist and an uninhibited conversationalist who lived a fascinating life. She was “kind of outrageous,” he says. He spent many enjoyable months standing in as she painted the portraits of various businessmen and public servants. Later, after he assumed control of the Klinkhoff gallery, he became one of the preeminent exhibitors of her work.

Klinkhoff recognized the memed work right away as Torrance Newton’s Two Girls, painted in 1931, and he provided its current location: the Art Gallery of Alberta. This had been its home since it was donated, almost immediately after it was painted, by the Southam family. The Ottawa branch of the nationwide media empire and family (an empire and family that Pierre Berton, in a 1950 Maclean’s article, called “bewildering in its intricacy”) was Torrance-Newton’s repeat customer, commissioning multiple portraits. But today, it’s unknown just which of the Southams’ friends or family members were painted as Two Girls.

The painting is not pictured on the AGA’s website, but collections assistant Kerrie Sanderson provided us with the images the museum had on file. Two Girls’ second life had gone completely unnoticed, popping up on various aggregators for half a decade but never drawing the attention of AGA staff. The image Sanderson provided was immediately recognizable as the one that had been used to create the meme: 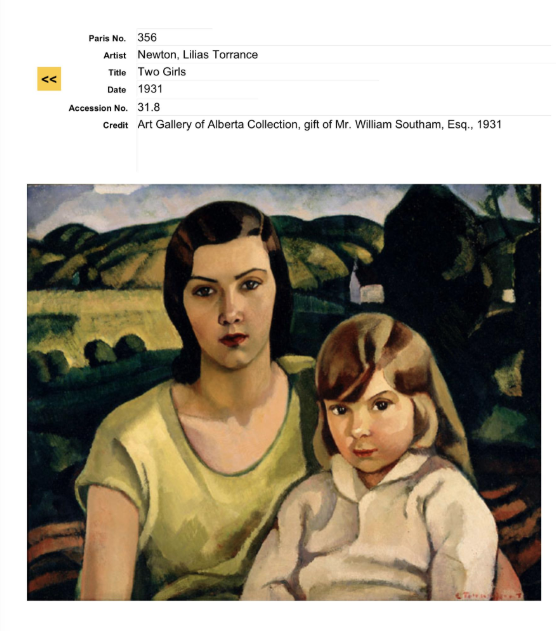 The real girl in Two Girls meets the viewer’s gaze, tilting her head as though sharing a private joke. Her small round face is illuminated, mischievous and lively. While Chloe’s superimposed expression is one of disbelief, almost disgust, the original is steady and curious.

In the end, this small art mystery and its solution is one more example of the paradox of the internet: images proliferate, but they’re divorced from their origins. The memed version of Two Girls, in a vacuum, for a time, became reality. Instead of Torrance Newton’s modernist approach to portraiture of children—which attempted to capture childhood “spirit” with the understanding that it was fleeting—Two Girls was instead, briefly, one of many images that preserved “Chloe” in childhood, trapping her as a meme for life.

Or maybe it’s not that deep, and in 2014 a young Art Gallery of Alberta docent uploaded a five-minute photoshop joke they didn’t realize would be the only Google-able version of the painting for the following half-decade.