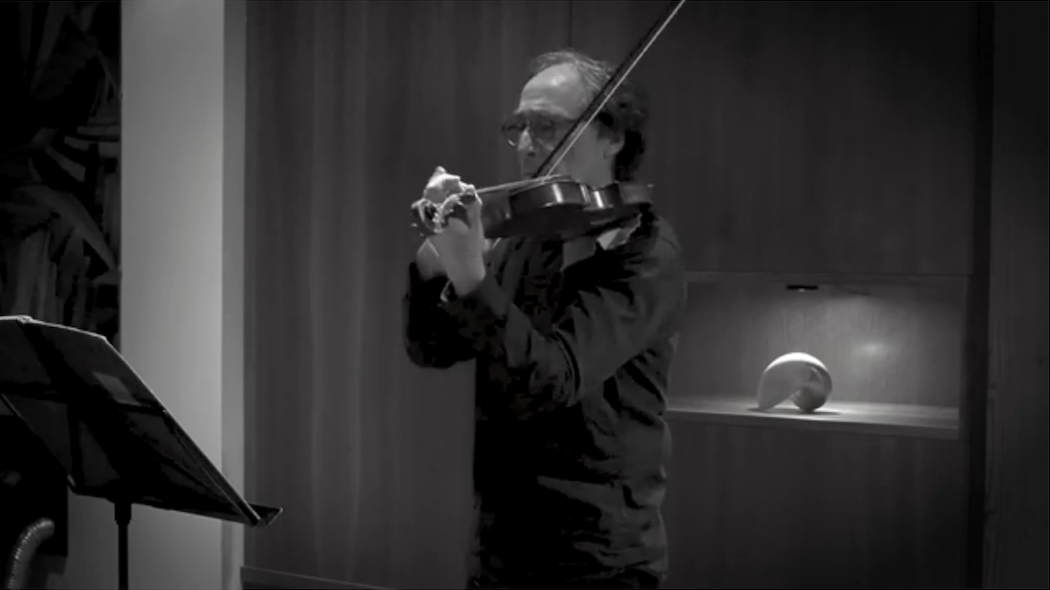 The last time I spent this much time at home, I was in high school, sitting in front of the upright Heintzman piano that was wedged between the mattress and the windowsill in my parents’ bedroom.

I wasn’t a great piano student, probably because I couldn’t sit still to practice for more than a couple of hours at a time. But I’m glad that those lessons led me to appreciate classical music—in these strange times, I’ve found myself leaning on it to find some solace.

A few weeks ago, I began rediscovering the genre in earnest, making a playlist starting with the pieces I learned as a student. I soon went down the rabbit hole of the YouTube suggestions algorithm, and that’s where I came across a series of videos called the “Isolation Commissions,” organized by a group called Little Chamber Music. This Vancouver-based nonprofit routinely hosts events to showcase local musicians. In the past few months it’s taken on an unique twist: for $200, anyone can commission a four-minute video performance by local artists. It’s not only a way to listen to music, but a way to support musicians during the pandemic, which has taken a toll on the livelihoods of all kinds of artists around Canada.

There have been close to one hundred performances commissioned by concertgoers, local music organizations, and fellow artists since the series began in March. From their living rooms, balconies and backyards, the artists have recorded an eclectic series of performances ranging from the classical canon to ethereal soundscapes. Some had professional recording equipment, while others propped up a phone and began to sing or play.

The tinny videos, while lacking the clarity of high-fidelity recordings and the ambience of live concerts, register a different kind of intimate, raw emotion as the artists performed in the rooms where they ate, slept and practiced.

I spoke with three of the artists who were commissioned by the series to understand their relationship with music during these times.

Marc Destrubé is an accomplished violinist who travels extensively. When the world came to a halt in mid-March, he was in the middle of dress rehearsals with the Orchestra of the Eighteenth Century in the Netherlands alongside fifty musicians from twenty different countries. He returned home to Bowen Island, British Columbia, and looked for anything that would keep him motivated to practice during his two-week quarantine.

“If I wasn’t picking up my instrument, I would get desperate and miserable,” he says.

First, Destrubé began to plan a series of concerts for his neighbours. He started learning Bach’s sonatas and partitas for solo violin. “These pieces are the Himalayas of the Bach repertoire,” he says. Meanwhile, “I’m happy to get up every morning because I’ve got a concert coming up.”

Destrubé appreciates the support that online series like the “Isolation Commissions” give to local freelance artists. He submitted an excerpt from his concert series for the commission and passed on the $200 to his videographer.

Destrubé still yearns for the return of live concerts and all their visceral trappings. ‘The audience has to go through that whole ritual of buying a ticket and getting to the concert hall, dressing up in a certain way,” he said. “There’s also the element of risk-taking by the performer, as well as the interactions between members of an orchestra. A live stream with a pay portal wouldn’t be able to replicate that.”

In the short term, Destrubé is looking to theatre productions as a model for how live performances might be possible with smaller audiences. “I think there’s a place for a quartet playing for an audience of around forty people, for a run of eight shows a week.”

For those who are exploring or rediscovering classical music, Destrubé recommends doing more or less what I did by accident: starting with a familiar composer and getting lost in the algorithms of streaming services. He’s also a big fan of the CBC radio program “Shift” with host Tom Allen, who enriches the listening experience with tidbits on history, musical forms, and the composers’ lives.

Genevieve MacKay recorded her performance on her phone. Using a pickup and a pedal, she played her original arrangement on her viola which was prompted by Debussy’s “La Cathédrale Engloutie.” It is a prelude inspired by the “Legend of Ys,” a myth about a submerged cathedral off the coast of Brittany that would emerge from the sea on a clear day. Her patrons had commissioned the piece to be used for yoga sessions.

MacKay spoke to me from her home in North Vancouver, where every evening at 7 PM, she is treated to an electric guitar rendition of “O Canada” by her neighbour amidst the customary hootenanny of pots and pans. “I heard a steel drum the other day, I think, which was super cool.”

While in quarantine, MacKay made up for lost income from cancelled summer concerts with teaching gigs and online events. Yet despite having more time on her hands, she has found it challenging to practice viola. “It’s been hard to settle down and be able to concentrate long enough to practice and listen to music. I think a lot of the stress is coming out.” Recently, she started to learn Bach’s “Fantasia Chromatica,” transcribed for solo viola, as well as Max Reger’s “Suite for Solo Viola.”

Working from home is helping MacKay to streamline her various commitments as a freelancer. She can offer more flexibility to her students, and feels as though she doesn’t have to chase gigs as much anymore. Most of all, though, she looks forward to when things return to normal. “I want to hang out with people in person again. I’m glad we have video chat, but it’s not the same.”

Nicole Linaksita is a concert pianist who is pursuing a Masters of Music degree at the University of Texas at Austin. When her school shut down at the end of March, she thought about staying put, but when coronavirus cases started going up in Texas, she flew home to North Vancouver.

Fresh off a first-place win at the Canadian Music Competition Stepping Stone last year, Linaksita was looking forward to performing a slate of concerts scheduled for the summer. When those got cancelled, she didn’t touch the piano for two weeks. “When I first heard all the news about the pandemic, it felt like everything just stopped,” she says. “I got so lost.”

Then she dug up a piano arrangement of “Vocalise,” composed in 1912 by Sergei Rachmaninoff as part of his “14 Romances.” It was meant to be sung without words by a soprano, and she had always wanted to learn it. “I just started reading through it, playing it, and got my motivation back. It was the piece that got me back to playing music for the way it was.”

“Vocalise” tells a heart-wrenching story. It’s about a feeling that’s not quite sadness and not quite loneliness. It starts pensively, builds up to a frantic crescendo that is fraught with tension, and ends with a sense of yearning. Linaksita was commissioned by Music on Main, a Vancouver-based music series that introduces new audiences to post-classical music while supporting up-and-coming artists.

When she’s not practicing, Linaksita writes transcriptions of video-game music. She is working on two piano arrangements with her friends while trying to both teach and study piano online. The challenges are different between being an online student and online teacher, she says.

“I’m teaching a lot of beginners, and that requires a hands-on approach that’s hard to get across on video,” she says. “As a student, I think my biggest obstacle is how to accurately capture the sound quality of my playing for my instructor.”

Even though she’s gotten back her piano-playing motivation, music isn’t taking up all her free time. “Should I be honest? I’ve been playing a lot of Animal Crossing,” she laughs.