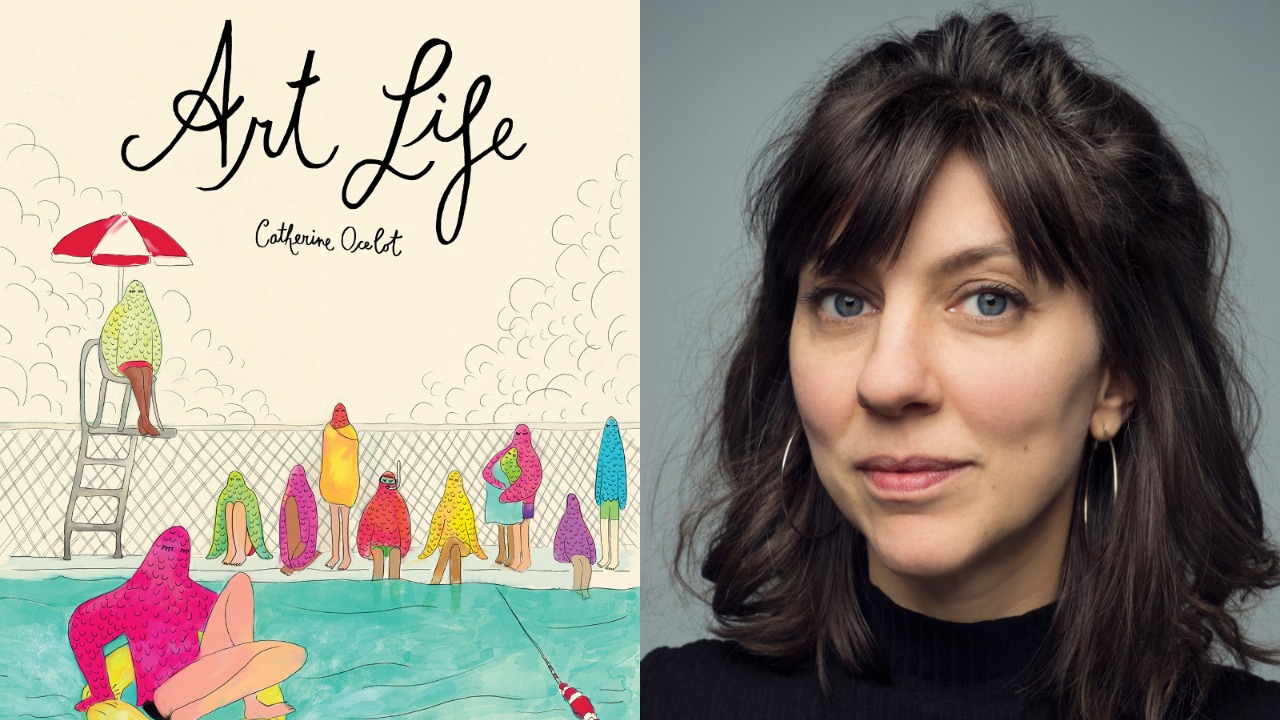 Catherine Ocelot is a Quebec art star, the winner of many prizes for her comics and graphic novels. But anglophones only recently got the chance to read her work with an English translation of La Vie d’artiste, or in English, Art Life.

It’s a collection of illustrated conversations between friends, colleagues, and family members which feel both realistic and relevant. I read the book in a few sittings one late winter weekend in Chicoutimi. I was moved by Ocelot’s art, by the easy way she and her characters wrestle with difficult questions: how we spend our days; whether our artistic projects have merit. It’s about friendship, motherhood, swimming pools, tree branches, weddings, the Cinémathèque québécoise. It’s about finding meaning in the quotidian. About noticing small things, awkward silences, watching blockbusters.

And yet it’s an augmented reality. Part of what strikes this easy balance between the banal and the philosophical is the counterpoint between Ocelot’s conversations—grounded in realism—and her surreal illustrations. In La Vie d’artiste, Ocelot creates a supercharged, jewel-toned Montreal. And all her characters, based on real people, are depicted as half-human, half-bird (the top half is bird).

Greek harpies—perhaps the original half-human, half-bird beings—were not supposed to be good creatures. But Ocelot’s friends are decent, complex, fully human harpies, if they are harpies, which they are not, really. They never acknowledge their non-human forms in the text. It’s understood, rather, that they’re entirely human. Their shape isn’t a superpower, or a transmogrification. It’s just how they are. Perhaps this is Ocelot’s way of showing how we are: more mythical and beautiful in our ordinariness than we realize.

I spoke to the author over email in French. Her responses have been translated into English.

Melissa Bull: The fourteen chapters in Vie d’artiste are named for real people, and the speech-bubble conversations that take place between your characters feel so true-to-life. Are they inspired by real talks you had? If so, did you intentionally set out to interview people and use your conversations to create this book?

Catherine Ocelot: The book is a récit d’autofiction that includes a mixture of real conversations I’ve had with different artists, as well as moments from my everyday life. By weaving the interviews with various moments of my life, I wanted to show how my character is changed by the people she meets.

For me, becoming an artist was a bit of a complicated journey, and it was hard to own for all kinds of reasons: preconceived notions about what my path should be, the fear of taking risks, the challenge of finding my voice. It wasn’t an easy road to take—or rather to accept—and maybe that’s why I’m so interested in learning more about other people’s paths. My book is a bit about that reflection. And it’s also about me, about finding my place among all the other voices that surround me. For me, the artist’s life is first and foremost about encounters. These can be with other people (whether they’re artists or not), with ideas, and with works of art.

MB: Your human characters have bird bodies. Can you tell me about how you got to drawing people as half-bird? Do you imagine their bird halves as natural? A costume? A revelation?

CO: Of course, there’s the notion of studying a species—that of the artist. The persona, the protection against the exterior, are all themes addressed in the book, and a costume can serve to symbolize them. Taking risks and my fear of falling are also ideas I explore, and I wonder if these feathers aren’t a way of softening a fall, or allowing for flight. An interesting question in my artist’s life is also the whole relationship with the exterior: what influences us? What do we let in? At which moment do we close our doors? How do we protect ourselves? It’s a fragile balance for me. So why not a costume that protects me? I’ve been told that the characters look more like fish than like birds. Which is an interpretation that makes sense because water is an element that is very present in my book, too. In short, it’s still a bit of a mystery to me and I find everyone’s interpretations interesting. 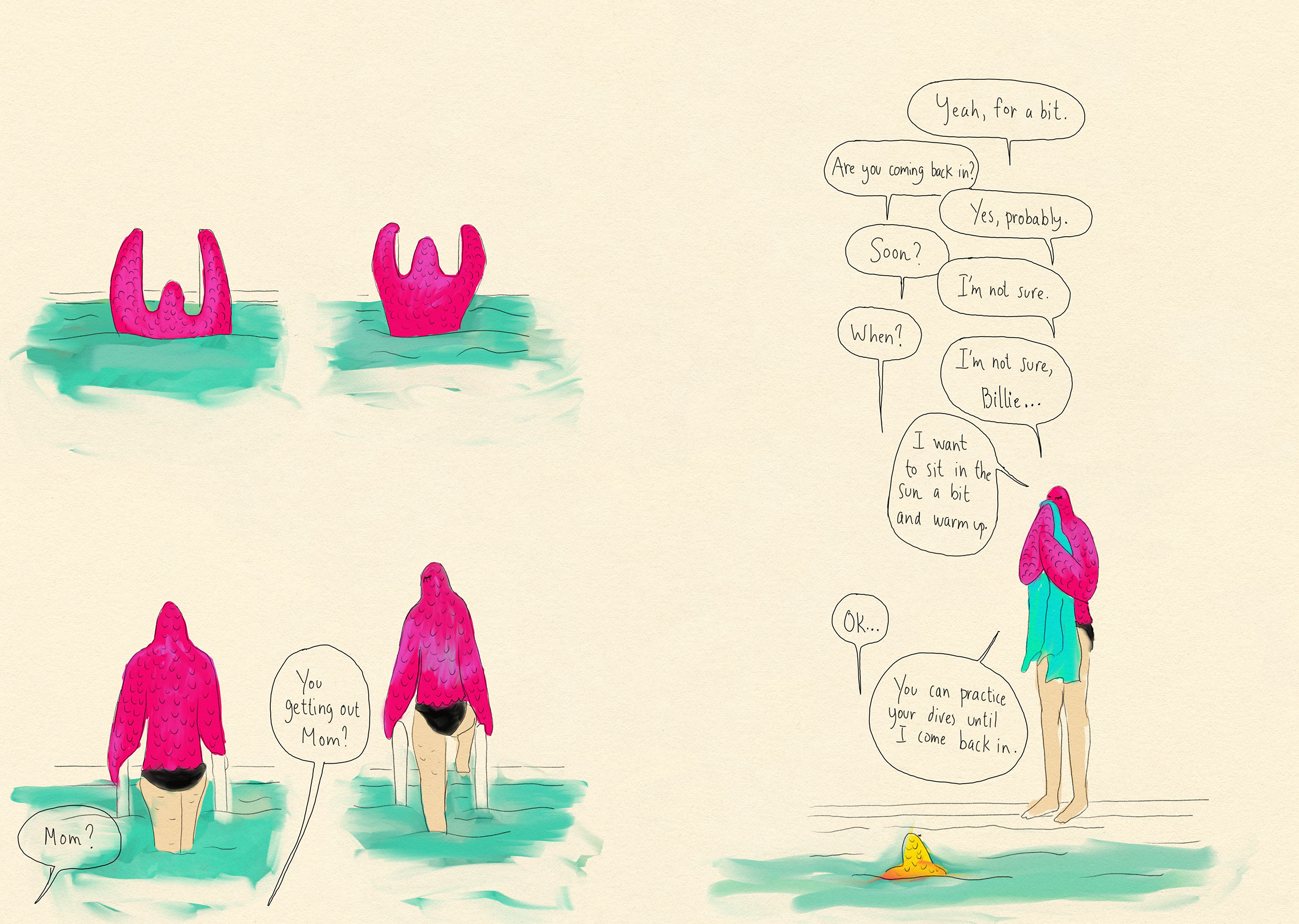 An excerpt from Art Life by Catherine Ocelot, translated by Aleshia Jensen.(Conundrum Press)

MB: How did you decide to use the space on the page? You use a more free-form type of illustration rather than the squared-off panels we might see in some comics.

CO: My stories and staging are driven by dialogue. So this type of layout comes to me naturally, no doubt inspired by theatre and film. I also studied visual art, so I’ve done photography, video, painting, which must have shaped my way of imagining the stories I tell. For Vie d’artiste I thought a lot about setting. I set a discussion with writers Julie Delporte and Daphné B., about our commitment to our work, at the Drawn & Quarterly bookstore, where they both worked back in the day. We’re having the conversation as a wedding is taking place, and while everyone is celebrating the newlyweds, we’re talking about our own commitments—not to our potential boyfriends or girlfriends, but to our work.

The meeting with filmmaker Rafaël Ouellet takes place at the Biodôme. A big part of our conversation focuses on coming into our own, comparing ourselves to others. A place like the Biodôme where we take animals and we stick them somewhere that tries to reproduce their environment, without really being like it at all, seemed like a good setting. It’s a very unusual place, very melancholy, and it speaks of being (or of not being, rather) where one should be.

MB: Vie d’artiste is often about the lives of women artists. A scene that stands out in particular is when the central character has a nighttime visitor and it’s all very nice but she’s also hoping they’ll go so she can get back to making art. She hands her visitor a cup of coffee both generously and a little unceremoniously, signalling to him that it’s time for him to leave. Why do you think it’s important to talk about these everyday experiences with friends, colleagues, family, children?

CO: She hands him out a cup of coffee because it’s going to force him to wake up and sit down to drink it, and in doing so he’s one step closer to leaving. She wants to be nice but she needs him to leave. I put the scene with the lover in because I don’t think it’s something we often see, a woman who chooses not to be in a couple, and who prefers to dive into her work, her family relationships and her friendships, without those choices being unhealthy. I would have loved to have grown up with single women female role models.

In my book, I’m a bit removed from the slightly clichéd notion of what we think of as “The Artist.” The myth of the dazzling, mysterious, inspired artist doesn’t interest me. What interests me is: What do we do to get by? How do we live? How to raise a child in an artist’s life? How does my mother’s illness affect my work? I carry all these questions and experiences with me when I sit down at my work table. I think for me, everyday experiences contain life’s bigger questions.

I grew up with so many preconceived notions about artists. Like the classic myth of the artist who pisses everyone off, the movie-set tyrant, the socially maladapted illustrator. The solitary or drunk artist. In general, they’re all variations on a theme: the Narcissistic Man. There’s also this preconceived notion that if you’re a good artist, you’ll be successful right away. Such a heavy burden! What I want to show in my book is that not only do we create through all of what makes up our day-to-day life, but that they are all experiences that influence our work.

MB: I feel like some of the central questions of this book are: Is what I have to say enough? Is this art? Is this a book? How did you decide that it was? It is—I’m glad you did.

CO: Autofiction is a particular genre. For me the choice is motivated by a need for affirmation, the need to speak directly, which implies taking risks. I of course asked myself if what I had to say was legitimate, if it justified taking up space. The prise de parole, for a woman, is a challenge for many reasons, among which include our lack of role models. As I was saying before, like many women of my generation, I grew up with a vast majority of male role models with whom I never identified. Strong voices like Julie Delporte, Daphné B., Natacha Clitandre, and Micheline Lanctôt are inspiring.

In addition to needing role models, I think we also need permission. That’s what I went to get with my fellow artist friends Emmanuelle Caron, Marcel Jean, Rafaël Ouellet—the permission to build myself, to protect myself from the outside, to be narcissistic, imperfect.

MB:Vie d'artiste won the Bédélys Québec prize for best comic book. Congratulations! What did it mean to you to win this prize?

CO: Thank you! The prize really surprised me and made me very happy! A few years ago, there were still debates happening on questions such as “Is it still a comic book even if there aren’t any boxes or speech bubbles?” “Is it a comic book or a concept book?” etc. For me, a prize like this for Vie d’artiste proves that the milieu is doing well! The family is getting bigger, it’s recognizing more and more voices, and valuing a multiplicity of perspectives and ways of making things can only be positive.

After completing her studies in art and art therapy, Catherine Ocelot worked at Radio-Canada as an art director and designer, then as a freelance stop-motion designer and illustrator. Ocelot published Nenette cherche un sens in 2006, Talk-Show in 2016. She is one of the founding members of the magazine Tristesse. Originally from Quebec City, Ocelot lives in Montreal.

This interview has been condensed and edited for clarity.