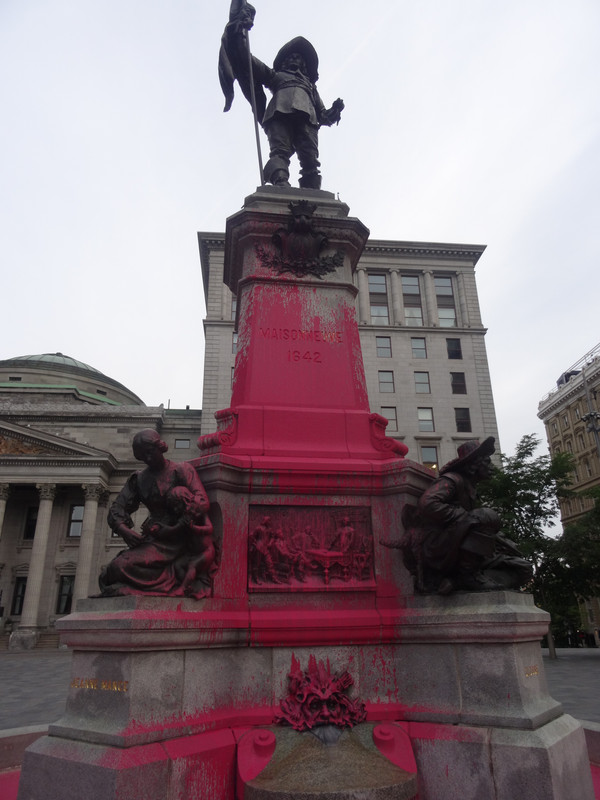 On August 29, 2020, after a peaceful march to support changes to police funding, hundreds of protesters descended on Place du Canada where a handful of activists pulled down the statue of John A. Macdonald, Canada’s first prime minister. As the statue hit the ground, the head unexpectedly popped off, invoking a wave of cheers from the crowd. It’s a singularly striking moment, the first statue to be recently toppled by activists in Montreal, and a very central figure to Canadian history. Not only was Macdonald pivotal in establishing Canada, but he is also considered an architect of the residential school system, one of the most deeply traumatizing policies in North American history.

The statue had been a point of contention for many years, and it had already been decapitated in 1992 on the anniversary of the hanging of Louis Riel, a Métis leader accused of treason by Macdonald. More recently, the statue has been repeatedly doused in paint, vandalized, and a petition for its removal has received over 46,000 signatures.

Now that the Macdonald statue has been ignominiously removed, it’s anyone’s guess as to whether it will be restored, replaced, amended, or relocated. Mayor Valérie Plante, Premier François Legault, and even Prime Minister Justin Trudeau have all weighed in, mostly emphasizing the wrongness of vandalism and suggesting monuments representing complex histories should be contextualized, not destroyed. As to what should happen next, opinions differ.

At a time when monuments of racism and oppression are being removed across the Western world, very little action has been taken to reconsider public spaces in Montreal. While many people might think they are few and far between, Montreal is in fact riddled with problematic monuments. They dominate many of our most important public spaces with an air of permanence that can make them seem like they have always been there, and always will be. Often people hardly notice them. Yet from Place d’Armes, to Saint-Henri, to the inescapable cross on Mount Royal, they are ubiquitous. Although incomplete, this is a guide to a handful of distinctly problematic monuments that I have noticed simply walking around town.

Before there was Montreal there was Ville-Marie, the fortress town built on the tip of an island where two rivers converge. The settlement was established in a strategic location close to the impassable Lachine rapids, at the tip of an island known as Tiohtià:ke in the Mohawk language. Paul de Chomedey, sieur de Maisonneuve, was the co-founder and governor of this distant outpost of New France.

Approximately seventy colonists were holed up in the fort village, which was established as a missionary settlement with the explicit purpose of converting the Indigenous population to Christianity. In short time, it would become a hub for fur trading and in line with the greater goal to turn vast swaths of North America into a functional mercantile and farming colony—in other words, a remote source of wealth for the crown. But in the early days, it was just one small dot, a clutch of families living on the edge of a vast continent mostly unknown to Europeans.

One of the pivotal events in the first years of this fledgling colony was an outburst of violence which left the local Haudenosaunee chief dead. According to Maisonneuve's biographers, the story goes like this: after several Haudenosaunee raids on Ville-Marie, a band of thirty colonists went into the woods to confront their “enemy.” There, the French encountered hundreds of Haudenosaunee waiting to ambush them. The French made a retreat, with Maisonneuve at the rear, making sure his men made it back to safety, when supposedly, he was attacked by the Haudenosaunee chief. Maisonneuve fired twice, killing the chief, then returned to the fort amid celebrations.

All foundation stories are inherently symbolic, political, and full of lies. From Romulus and Remus suckling the she-wolf, to the Dutch “buying” Manhattan for sixty guilders, foundation stories exist to tell us who we are and how we fit into a tradition. They cut to the very bone of what we are doing here. And the foundation stories of our North American cities are used to both cover up and justify the genocidal violence that played out across the hemisphere, from the arrival of Columbus to the present day.

Regardless of the reality of the Haudenosaunee battle, what is perhaps more important is that it has been embedded in the collective imagination as the story of Maisonneuve killing the Iroquois chief “with his bare hands,” as it was engraved until recently on the Bank of Montreal building on the North side of Place d’Armes.

The language of the engraving has subsequently been softened. But other violent images remain clearly visible in the detailed bas-reliefs on the base of the Maisonneuve monument. They include Maisonneuve shooting the chief, at point-blank range, in the face, and a separate relief of the strangling of a Haudenosaunee man during the Battle of Long Sault, a pivotal 1660 battle between French colonists and their Huron and Algonquin allies against the Iroquois Confederacy.

The monument was unveiled in 1895, a time of, dare we say, different values. The glorious bronze of Maisonneuve, with his flamboyant hat, tall boots, and long sword, looms over the square like a god, holding the flag of the King of France. And how could we forget that Maisonneuve is also the man who put the first cross on the top of Mount Royal, a 17th century colonial aesthetic that we still live with today.

To recap the famous story, Christopher Columbus made four trips across the Atlantic from Spain, determined to find a water route to Asia. Although this never panned out, his goal in the Caribbean was clear: to find gold and enslave the Indigenous population. Columbus himself wrote in a letter: "Let us in the name of the Holy Trinity go on sending all the slaves that can be sold."

The Spanish wreaked havoc all across the Caribbean. Girls as young as nine and ten were sexually abused. In Haiti, Taíno people fourteen and older were forced to collect gold (of which there was very little); those who did not bring back the mandated amount had their hands mutilated.

Spanish historian Bartolomé de las Casas, who arrived in Hispaniola on Columbus’s final crossing in 1502, described what he witnessed in A Short Account of the Destruction of the Indies: “They [Spanish explorers] forced their way into native settlements, slaughtering everyone they found there, including small children, old men, pregnant women, and even women who had just given birth.” Taíno people began committing mass suicide. And a quarter century after Columbus’ arrival in Haiti, most of the Taíno had died from enslavement, massacre, or disease, according to Yale’s Genocide Studies program.

Columbus memorials, like the life-size bronze bust installed in Villeray, at the corner of Chambord and Jean-Talon, are often established with political support from Italian-Canadian and Italian-American communities. But clearly, at this point, any and all memorializations heroicizing Columbus must be reconsidered or dismantled.

In an unassuming park in Saint-Henri, Cartier stands high above, sword on his hip, with one hand extended to the land he claimed for the King of France in the early 16th century. Like the Maisonneuve monument, this tiered bronze fountain is a product of the 1890s, as one can see on the gold-lettered plaque just below the water spewing from the open mouths of four Indigenous faces. Like the John A. Macdonald statue, it too has been targeted by activists. The vandalism I chanced upon last October featured bloodied gloves at the base of the monument, a toothy fabric mask wrapped around Cartier’s face, and an effigy hanging from a rope on his outstretched hand. It was enough to make me look up Cartier right then to find out what exactly he had done.

Though incomparable to Columbus, he was a part of the same European colonial superstructure beginning to impose itself upon the continent. And Cartier specifically, at the very least, is known to have kidnapped Chief Donnacona and nine others from the Iroquois village of Stadacona, located at present day Quebec City, and to have brought them back to France, where the chief died.

Here’s one last example of how unwelcome political agendas can seep into our public spaces with little notice. In 1957, a plaque was installed on the side of the Hudson’s Bay Company flagship on Saint-Catherine Street, commemorating Jefferson Davis, president of the Confederacy during the American Civil War. Written in French, it read: "To the memory of Jefferson Davis, president of the Confederate States, who lived in 1867 in the home of John Lovell, which was once here." Davis had come to Montreal to join his family after two years of imprisonment following the surrender of the Confederacy to the Union Army.

The plaque was a gift to the Hudson’s Bay Company from the United Daughters of the Confederacy, which could be described as a public relations branch of the Ku Klux Klan. What Montrealers would have approved of the commemoration of such a beseiged figure—the former owner of hundreds of enslaved people, who devoted the better part of his life to fighting for the institution of slavery—is difficult to imagine.

But the fact of the matter is the plaque was slipped in there, right in the midst of one of the city’s busiest blocks, and sat there for seven decades, bolted to the wall. A mere three years ago, following the white supremacist violence in Charlottesville, Virginia, the plaque was quietly removed, and some part of the building’s soul must have breathed a sigh of relief. One less monument to the wicked.

The appearance of permanence is a tool of propaganda—this is how public monuments work on our psyche, with the impression that they’ve always been there and thus, ought to stay. But nothing that looks permanent really is.

All over North America people are realizing this, and the multitude of monuments that have been decommissioned, torn down, or beheaded could fill a book. Yet here in Montreal, despite the momentum of Black Lives Matter, little has changed. We can’t hold onto these things forever now that our mythologies have shifted; or at the very least, these monuments need to be altered to account for our understanding of them.

Nearly every cultural event that I’ve attended in the past few years begins with a speech acknowledging that we are on unceded Indigenous territory, and yet our public spaces are still dominated by a visual ideology from bygone centuries. If this verbal acknowledgment is a step towards finally recognizing the horrors and injustice of our history, then the next logical step is to reconsider the public spaces themselves.

So who’s next? Should we rename everything? Should all signs of the colonial past be abolished? It’s hard to say.

But if the time for change is not now, then when is it?