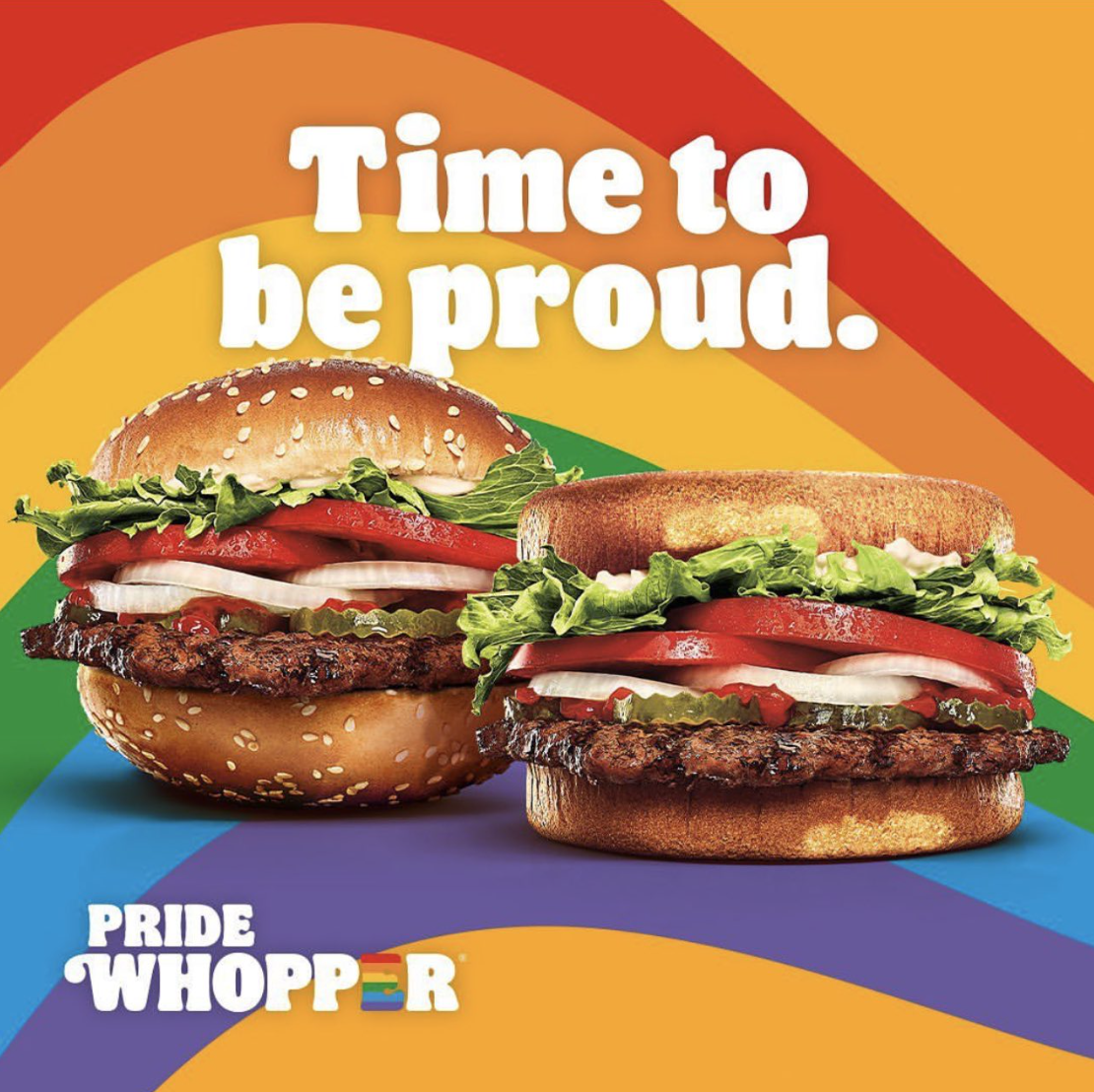 After being off Twitter for a few years, I’d forgotten how quickly it happens once the clock strikes 12:01 on June 1. One moment I’m lying in bed, pursuing my usual mix of drag race content and 140 character think pieces, and then, suddenly, everything is rainbow. My feed is inundated with corporations’ annual attempts to pass themselves off as ‘in on’ queer culture. Ah yes, the corporate pride tweets have arrived right on schedule.

June is widely recognized as Pride month, originally to commemorate the Stonewall riots of June 1969. Now, it’s also become a time for companies to use queer history to seem progressive or simply, well, sell stuff. One low-light from this year came from the US Marines, who tweeted an image of an army helmet decorated with rainbow bullets. On the slightly ‘lighter’ side was a Burger King campaign selling burgers with “two matching buns”—two ‘top’ buns or two ‘bottom’ buns (clearly an accidental yet baffling misunderstanding of queer sex). Then there were the overtly ridiculous posts, like the NASCAR tweet that just read: “YASCAR.”

The willingness to use queer culture for profit without providing any tangible support for our communities during the rest of the year is, frankly, bleak AF. Still, once I got over my initial shock, I felt something else—a joyful anticipation about what I knew would come next. And, thank god, other internet queers delivered. They started turning the tacky appropriation into true entertainment with strings of tweets that parodied the outlandishness of corporate pride.

“As a lesbian, I’m used to being unable to tell what is and isn’t a date. Consequently, this pride I’m partnering with Microsoft Excel,” wrote @RealDJCthulhu. Or this, from @rhiannoneshaw: “As a bisexual woman in a relationship with a man, I’m despised by the straight and LGBT+ communities alike. That’s why, this Pride, I’m partnering with James Corden.”

In these ‘partnering with’ tweets, queer people use irony, exaggeration, and parody to create a performance of corporate pride that invites us to laugh, while also pointing at the absurdity of it all. This way of interacting with the world existed long before Twitter—rather, this precise cocktail of humour called camp has been part of queer culture for over a hundred years.

The word camp comes from the French verb se camper which means “to pose in an exaggerated fashion.” The Oxford English Dictionary defines it as “ostentatious, exaggerated, affected, theatrical; effeminate or homosexual,” and traces the term’s current meaning back to 1909. As early as the late 1800s, Oscar Wilde began articulating the ethos of what would later be known as camp. In an interview about The Importance of Being Earnest, he said the play’s philosophy was that “we should treat all the trivial things of life very seriously, and all the serious things of life with sincere and studied triviality.”

So, what is camp? It’s a notoriously difficult thing to define. Lady Gaga is camp. Dolly Parton is camp. John Waters films are camp. Drag performances are often, but not always, camp. The so-called camp themed Met Gala was, in fact, not camp, but Rihanna dressed as a sexy version of the pope at the 2018 Met Gala was definitely camp.

In her book Women, Camp, and Popular Culture, Katherine Horne writes that, “at its core, camp is defined as a parodic device that uses irony, exaggeration, theatricality, incongruity, and humor to question the pretext’s status as “original” or “natural.” It’s a style or sensibility that uses certain tools—parody, irony, theatricality, exaggeration—to reject seriousness in all its forms. By doing so, it can show us the inherent absurdities in some of the things we see as ‘normal’.

Take Dolly Parton, for example, and her assertion that “it costs a lot of money to look this cheap.” Her exaggerated take on a country singer’s aesthetic is a parody of itself, and it’s putting on a show of ‘cheapness’ without taking it seriously (i.e., by spending a lot of money). In taking the expectations of female country stars to their extremes in this way, it makes us realize how absurd and stupid and funny it all is. Is Dolly being camp on purpose? Well, that’s not necessarily the point. Camp can be intentional, but it can also be a way of looking at things—the camp is in the eye of the beholder, so to speak.

By the mid-twentieth century, camp had become both a source of amusement and a survival strategy for queer folk, especially gay men. In fact, in the decades before the Stonewall riots, camp references were used as a sort of secret language. A knowledge of camp gave queer people a lexicon of double entendre and word play that allowed them to identify one another without drawing the attention of an often hostile society. It also formed the basis of a shared culture that could be passed on to newcomers. This understanding that certain cultural references had been imbued with a covert queer subtext helped people find both sex and community.

One famous point of reference is Judy Garland, whose sincere yet over-the-top style and theatricality provided a wealth of material for camp culture.Asking someone if they liked Judy Garland could easily seem like innocuous chit-chat. And if they responded with confusion or indifference, you might know to move on. However, if they responded by telling you that they just loved The Wizard of Oz, you knew you were speaking the same language. This test could be applied with mention of other mid-century divas like Mae West or Barbara Stanwyck. Once something, or someone, became implicitly accepted as camp, it could be thrown out like sonar.

Camp humour also allowed queer people to lampoon the heteronormativity of the day without being detected by the uninitiated. As Esther Newton describes it in her book Mother Camp, it was “a system of laughing at one's incongruous position instead of crying.” Rather than feeling despair at having to hide one’s sexuality, one could revel in the hilarity of straightness as an exaggerated performance. In 1964, Susan Sontag published her famous Notes on Camp, which is credited with making camp humour and sensibility a topic of academic and public consideration. She wrote that camp is “the love of the exaggerated, the ‘off’, of things-being-what-they-are-not,” and that it revels in a “failed seriousness.”

Part of this ethos is a love of the so-bad-it’s-good B-movie. Take Mommie Dearest, for example, the 1981 film that stars Fae Dunaway as Joan Crawford and depicts Crawford as a manipulative and abusive mother. The film was a critical failure but became a camp classic. While child abuse is not camp, the over-the-top, exaggerated performance of abuse in Mommie Dearest becomes camp because it is trying so hard to be serious and yet is so plainly absurd.

“The camp comes in when the viewer, the perceiver, the audience declines to take it as seriously as it is meant and actually sees it in a different way,” says Gregory Mackie, a professor of English Literature who teaches camp at the University of British Columbia.

In Notes on Camp, Sontag writes: “Camp sees everything in quotation marks. It’s not a lamp, but a ‘lamp’; not a woman, but a ‘woman.’ To perceive Camp in objects and persons is to understand Being-as-Playing-a-Role.” One classic example of this is drag performance. While not all drag is campy, drag performers often use camp in order to make us see gender as a ‘role,’ rather than a fixed object.

Dank Sinatra, a non-binary drag performer based in Toronto, says that camp is a natural bedfellow to critiquing gender roles because camp is “inherently not taking things too seriously.” Rather than treating gender as serious or real, seeing someone perform gender in an absurd way breaks it down and denaturalizes it. Dank offers the example of a drag performer wearing outlandishly large, unrealistic tits, or using a bottle of whip cream as a penis. “You can take any gendered element, item, feature, whatever, and lampoon it and turn the dial up on it,” they say. “And that in and of itself is a way to make a statement about gender.”

There’s been much debate over the politics of camp—largely about whether it is political at all. Sontag says it was staunchly apolitical. She wrote that camp emphasized style to the point of slighting content, and was therefore disengaged and depoliticized. Tennessee Williams, writing about camp in 1975, saw it as oppressive—an “obnoxious” form of self-mockery that would naturally disappear as the gay rights movement progressed.

One may well wonder if, given the current state of affairs, humour might be antithetical to queer liberation. As both trans health rights and gay marriage face political attacks south of the border, is it appropriate to react to corporate pride with laugher? Well, camp isn’t super concerned with what others think is ‘appropriate.’ And humour in and of itself can act as a form of resistance to normative ways of thinking.

But beyond that, many do feel that camp can be a powerful political tool. For Mackie, it isn’t inherently political—camp doesn’t exist exclusively to make the world a better place. However, he says it can easily be adopted to make a political statement. “It sort of breaks things down, rather than builds them up,” says Mackie. “And it's particularly good at breaking down moral certainties and, you know, preachy judgmentalism.”

By refusing to take anything seriously, camp deconstructs what might seem ‘normal’ and helps us identify the absurd. The tweets that use a camp sensibility to lampoon corporate pride are ratcheting up the ridiculous nature of companies pretending their products have an authentic connection to queer culture. In doing so, they gesture at the inappropriate, extractive nature of corporate pride tweets—while also making us laugh. Blessedly, it seems there’s no need to choose between cultural critique and comedy. So, tweet on, queers. Tweet on.