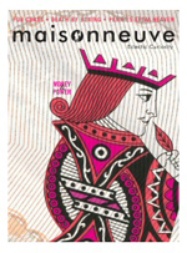 In the queue for entry to Black and Blue’s main party, half of the people were dressed like me: jeans, T-shirt, sneakers. The other half were preparing for club lights and darkness

“Killed” is a term frequently heard on the wild frontier of book design. If that language seems too violent for dust jackets, then talk to designers about the painful experience of seeing their brainchildren tossed to the wayside. A book designer has many masters—readers, authors, publishers, shoppers, publicists—each with their own motives. Maisonneuve’s Salon Refusé showcases three respected designers and their valiant fights for the perfect cover.

Paul Sahre has designed book covers for, among others, Vintage, Knopf and Beacon Press. He works in New York City out of the aptly named Office of Paul Sahre, where he also silkscreens posters for non-profit organizations. Killing the Buddha: A Heretic’s Bible recounts Jeff Sharlet and Peter Manseau’s trek across the United States in search of contemporary religious experience. The book also includes thirteen reimaginings by acclaimed American writers of different books of the Bible.

This is a very literal interpretation of the book: an image that represents the deity with an X through it. Of all of the0designs, this was the least typical because it didn’t have type on it. This is quite rare in book-cover design, but the unorthodox approach is fitting considering the book’s unconventional approach to religious themes. The huge type on the spine allowed “the title to get out there, but just in a different way.” It also makes the book into a glaring X on the bookshelf—something that cannot be ignored. After so many rejected proposals, it was a relief to come up with something that the author loved.

1 The traditional image of the Bible did not convey the book’s raucous theme, and so this cover was considered too “sleepy.” “Calling something a Heretic’s Bible—[it] needed to make more of a disruption on the shelf,” says Sahre. This book isn’t “about monks, [it’s] about people dealing with these issues today.” Ultimately, the image of praying hands playing with a cat’s cradle was deemed clever, but too subtle.

2 Sahre loved this cover because he saw it as an observation on how to look at the modern world: there is spirituality in the everyday. The unconventional font helps to foreground the image of the eerie telephone pole, a technique that Sahre hoped would pay off “if the viewer took the time to consider it.” Since this proposal was considered at the same time as the winning cover, though, the concept was never fully discussed.

DAVID DRUMMOND The Last Well Person: How to Stay Well Despite the Health-Care System

Designer David Drummond works out of Salamander Hill Design, his home studio in southwestern Quebec. He is loved and acclaimed at Maisonneuve for having designed all our 2003 covers, but is probably best known for his book-cover work. Nortin M. Hadler’sThe Last Well Person: How to Stay Well Despite the Health-Care Systemexplores how the increasing medicalization of everyday life is in fact hazardous to our health.

This was the image that best embodied the book’s tone. (Well, that and a nice leg in a loafer.) The photo initially lacked a hospital context, so Drummond superimposed the exit sign. “When you’re doing cover design,” he says, “you have to reduce it to its simplest form. You can’t really explain it. You have to try and communicate an idea, a story, as concisely as possible.”

1 This cover was Drummond’s favourite. He thought the image of a hand in the form of a gun would be provocative if properly executed, but the idea was killed precisely because of its confrontational nature. If a client or an author doesn’t agree with your vision, says Drummond, the answer isn’t to rearrange the hand or the syringe: “You have to let it go.”

2 This cover was rejected because the ambiguous angle of the photograph meant the image wasn’t obvious or decisive enough. There was concern that hurried shoppers would scratch their heads and walk on past to The Da Vinci Code. For the cover to work, Drummond would have had to photograph the hospital again from a more accessible angle. Concerned that this would sacrifice the photo’s unusual quality, he declined to pursue the concept any further.

3 Humour is appreciated in book design, but only if it’s succinctly communicated. Drummond felt that the outsized arrow had a witty, Monty Python–esque feel, and he liked how the title interacted stylistically with the design. The concept was criticized, though, because it made the book appear to be about survival—provocative considering the actual subject, but nonetheless misleading.

John Gall is the art director for Vintage. He lives and works in New York City, and has made a hobby out of collecting posters similar to the initial designs for Dogwalker. The book, written by Arthur Bradford, is a collection of short stories about hybrid dog-men, cat-faced humans and women who give birth to puppies.

Collaborating with illustrator Brian Rea, Gall came up with this final cover, which uses the bright, Xerox-inspired colours of the original poster proposal (see below). A review quote, standard in book design, is seamlessly incorporated by the use of Rea’s signature messy scrawl. The author was pleased, but Gall felt that the collage compromised the design concept. It’s better to stick with a pure idea, he argues, than to water it down with “a little of this, a little of that.”

The inspiration for Gall’s initial proposal (below) was the Lost Dog posters that one often sees attached to lampposts and telephone poles. Gall deliberately chose colours that are stocked in local copy shops: hot pink, highlighter yellow and Crayola blue.

Faced with a limited publicity budget for the book, he designed the three different posters as a possible advertising strategy: Gall envisioned interns posting photocopies of the posters all around New York City. The ads could even Include tear-off tags with the number for an information line. Gall opted for a playful design because he knew the writer was young and the stories were experimental. The author nixed the proposal, however, and brought in photos of his own puppies for artistic inspiration.