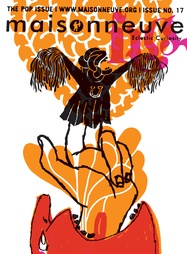 I suppose I should introduce myself: My name is Tim Fletcher and I play music in a group called the Stills. The folks at Maisonneuve felt it would be interesting to have a member of a Montreal band write about music in a column every two months or so. They asked me, and I agreed. Here I am.

Since this is an introduction, I'd like to say less about who I am and more about where I come from. Perhaps it's best to start with a few simple confessions: I've always had a problem sizing myself up and feeling at par with my peers-as a teenager I was anxious, panicky and depressive. I had a hard time processing my impressions of everyone around me, and the realm of women was certainly out of the question. In hindsight, none of this was out of the ordinary, but back then it felt raw as hell. I dealt with these insecurities in part by comparing other people's relationships with music to my own. In high school, this posed a few problems-I was a metal kid.

Metallica, Pantera, Megadeth, Slayer: I believed that they were, quite simply, the best musical choices one could make. They were genuine, intense and visceral. I was the opposite-frightened and inarticulate-and metal allowed me to understand my painful disdain for the world around me via something that seemed pure and unadulterated. With Pantera, for example, I could channel my contempt through the violent screams of a massive, tattooed redneck skinhead from the Deep South-who once died of a heroin overdose, came back to life saying he had seen no heavenly light and decided to expand his tattoo collection by having a large inverted crucifix inked into his leg. Very healthy stuff. Metal may have been a cathartic outlet for my general unhappiness, but it also fed my rage.

When I look back now, though, I see that there were positive aspects to my obsession. From the beginning-when it was merely an escape-until the very end, when it became quite alienating, these were the sounds that captured my heart. I was extremely passionate in my dedication to this music-I was into it more than anyone I knew was into anything. I understood it fully. I learned to appreciate the subtleties of metal while remaining largely ignorant of music's vaster kingdom.

When I got to college, and I was exposed to the greater possibilities of the world via a cultural hyperprocessing, my brain didn't know what it was in for. Beyond my limited experience of personal expression-loud, aggressive, angry-I suddenly found an infinite number of possibilities. I was wide-eyed: I discovered wondrous films, learned about art and late-night conversations-I felt real inspiration. But closest to my heart was a great discovery of new music. It was beautifully terrifying. Imagine coming across the Clash, Paco De Lucia, Miles Davis, Ennio Morricone and the Smithsall of a sudden; diving headfirst into old movie scores, rockabilly, soul, folk, jazz and Tom Waits. I like to think of this period as one of great enlightenment.

To top it all off, I shared all of this with my friends, and we began to make music for ourselves. We were excited and inspired far beyond our capabilities as musicians and songwriters, but who cares? We'd get stoned and write songs with big harmonies and obtuse, colourful lyrics. We'd get drunk on wine and lose ourselves in our seventeen-year-old fantasyland. We'd go to parties and lead everyone in song. It strikes me now as a very Quebecois experience-the joie de vivre, the wine, the hash, the singing with friends. It was a time of heightened energy and vibrancy that ended up lasting many years and, for me, remains the template for having a truly good time.

I remember the first time I heard London Calling. I was with some friends in some basement of some parent-less home. I'd already listened to Combat Rock and was interested, but I didn't quite get it-I thought it was what people on heroin might listen to. No one there knew the Clash, but when I slipped the tape of London Calling into the player and pressed "play," everybody shut up. It was a bona fide call to arms. I knew I had stumbled onto something that would fuck me up forever-in a good way. It was punk, ramshackle and crooked, and every living cell of it was infused with a complete disregard for everything, save the celebration of itself. And that was before the bass line kicked in.

That kind of youth-driven idealism can be a hard thing to maintain. I sometimes lose touch with the great and simple things I learned in those days of passionate, inspirational discovery.

Being successfully creative, I think, requires a certain amount of letting go, a respite from ego-I believe seeking this state of mind is a fine and noble thing. Music-the art and creation, the personal and social ramifications of it all-can give us hope and understanding and make us love. There are always amazing friends, family and places that provide these things, but music has the power to heighten a moment and remind us of it afterwards. It gives us access to the things we can't quite grasp, and can give vent to untapped angst or energy. It doesn't matter if music leads you to dancing like a fool, to the experience or expression of pent-up emotions, to motivational diatribes, or calmly towards quiet reflection-it exists, at least for me, in these moments and forthese moments. It becomes the catalyst, the enzymes that work to inspire and propel us towards decision. It allows us to become accountable for the love we feel-to bask freely in it, and to recover when it shatters us.

What I'm getting at is a much bigger idea than can be summed up in one single column. With any luck, this first instalment is just the beginning of a longer relationship. Dig in and get comfortable, because while I'm aware that there's an element of idealism in all this, it is still what I believe in. After all this time and despite all the many challenges my idealism has faced, I know deep down that it's worth exploring.

Tim Fletcher is a singer, guitar player and co-songwriter for the Stills. Look for another piece by the Stills' front man in Maisonneuve's upcoming Pop issue-on newsstands September 15.