Patrick Gregoire and James Irwin aren’t in the same band. Gregoire is a singer and multi-instrumentalist in the roiling Sister Suvi, whose album Now I Am Champion is available now. Irwin sings and plays guitar in My People Sleeping, who sound precisely like their name, and whose debut full-length Feye will come out this winter. Recently, on a rainy Tuesday night, we sat down after choir practice to talk about Montreal.

My People Sleeping plays Wednesday, September 30th at 8 p.m. at the Ukrainian Federation. Sister Suvi plays Thursday, October 1st at 1:30 a.m. at Balattou. Both shows are part of Pop Montreal.

Drew Nelles: First, James, can you tell us what you’re wearing?

James Irwin: I’m wearing just my underwear because my pants were soaking wet when I arrived.

DN: Sweet. I wanted to start off by talking about songs. Specifically, Patrick, I was wondering if you could tell us a bit about how you and Sister Suvi came up with “The Lot,” because I think a lot people in Montreal feel like you wrote it about them.

Patrick Gregoire: About them?

DN: Well, I feel like you followed me around on my bike for a night in Montreal.

PG: Yeah, it’s a pretty accessible experience. Specifically, it’s about one place in the east end—I guess it’s in the borough Anjou, at the end of Bellechasse. If you keep on going past the 25, you get to this big, empty place where the suburbs suddenly stop and the housing developments end. You walk through this hole in the fence and you’re in a giant empty field, and it’s the most empty and alone place. If you keep walking through it, you go through another hole in the fence, and you get to this big quarry, with a giant pit in it and a huge factory that’s lit up. There are these two smokestacks that spew hundred-foot flames out of it at intermittent periods. You can actually see it from the top of the mountain at night sometimes. It’s a pretty majestic place.

The other part of that song is about the edge of the island, if you keep going all the way to the easternmost part. These weird parts of the city—they are your city but you’re completely unfamiliar with them. And it almost feels like you’re on vacation. You’re like, “This is so strange. I’ve never seen this before…but it’s in Montreal! What?”

DN: And James, I was wondering if you could talk about the writing process behind “Seahorse.” I remember seeing you and Ruby [Kato Attwood] play it at Patrick’s birthday party, and I feel like my heart stopped. It’s a really transcendent song.

JI: When I first got my digital piano I would play it at top volume in my room. I didn’t really know how to play it, so I would just slam it and the words just came out when I was yelling. At first it was a very loud song, and I’d yell it. It was pretty much written as it is now, but faster. Then Ruby moved back here from Halifax, and she moved into my apartment and I showed her that song. We started singing it together, and we did harmonies at first but it sounded cheesy. So we decided to just sing unison and that we should just do that all the time.

PG: That My People Sleeping patent.

JI: It was very much about me and her trying to figure out how to make something together. It felt really good to close our eyes and sing right at each other’s faces. Then we started singing with Katherine [Peacock]. She played the piano, and she immediately played all of my songs slower than I had. We all got into that idea and started to slow it down as much as possible. By the time it was recorded, the three of us had even influence on it. 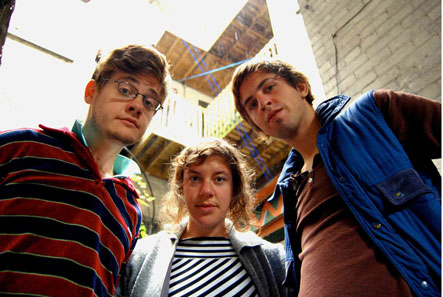 DN: How long have you guys known each other?

PG: James and I? A couple of years, give or take.

JI: We actually met at Shaun [Weadick, another choir member]’s house. Patrick is a friend of my friend Carl. I was playing with Carl at the time and I remember you saying [deep-voiced Patrick imitation], “Hi James, I know you because Carl talks about you.” That was when Ruby and I first played “Seahorse.”

PG: I remember being really hypnotized by that song, even then. I was hanging out with this girl then, and she had been dating—I don’t know if this is interview material—she was dating a guy in a band that contains the word “fortress.” I was singing the lyric, “I can build a fortress,” and she was like, “I don’t want to hear that word right now.” And I was like, “No, you gotta hear this jam! It’s hot. It’s hot!”

DN: I’m curious about what it’s like to be a musician in Montreal right now. Do you ever feel like you’re living in the shadow of the city five years ago, or is it liberating in a sense, now that the pressure is off and the international eye has moved on?

PG: I think the city of five years ago is living in the shadow of us. [Laughter all around.] Whatever, fuck that.

DN: I guess it is kind of an inane question, but I think it’s something that people do think about.

JI: I could see how people from the outside would want to know the answer to that question, but I don’t really know if there is one.

PG: I think that arts scenes and music scenes definitely move in cycles and waves and generations, and I see that continuing to evolve here. I think it’s a really beautiful thing that a lot of the talent that did a lot of great things and inspired the younger kids five years ago have grown up to have really great careers—and maybe moved out a little bit, and maybe aren’t such active and daily participants in the local scene. But in turn the people who really got inspired by those bands, like us, are now coming of age a little bit, and the cycle begins again.

Maybe that’s not as glamorous as David Bowie getting involved and the New York Times snooping around, but it’s a continuous cycle and it was going on long before people were supposedly discovering Montreal. There were bands doing really amazing things ten years ago that built the foundations that are still going strong now. You look at institutions like the Hotel2Tango and the Sala and the Casa, and those come out of another era, even older than the one you brought up.

DN: That’s kind of what I mean: the actual act of international attention can change the dynamic itself. There’s obviously been a lot going on in the city for years, but the moment that existed five years ago—I’ve heard people talk about how that ruptured the dynamic in some sense.

PG: You could look at it that way, but I think it’s kind of counterproductive to do so. A lot of really amazing things came out of that too. I don’t think our youth culture and counterculture is ruptured. I think it’s going strong, and what always made this town a great place for music continues to exist. There is still an alienated, overeducated Anglophone underclass that has nothing to do with itself except fucking sit around singing in choirs on Tuesday nights and working minimum-wage jobs. That’s not going to change in spite of any band blowing up.

JI: None of this would have happened if not for Godspeed [You! Black Emperor] and the scene before. To look at it that way—a scene and then a scene and then a scene—I’m sure that it’ll happen again. In terms of actually living here at the time, I remember it being uncomfortable. Some people, when they get attention, react by taking advantage of it, and some people get really jaded about it. Being around people who had both reactions was a little bit weird for me to personally sort out—whether or not I would be able to handle it.

We made our album with Dave [Bryant], who was in Godspeed, and he doesn’t really know anything about what’s happened since—I don’t mean to say he’s ignorant, he gets Arcade Fire, but he doesn’t really understand particularly why people at that time were interested—and his influence changed our music to a huge degree. It totally ended up being all ambient and post-rock. He drew our songs out, really. I think it’s funny that we accidentally wound up going backward into that influence. We never intended that.

Another anecdote is that I just played a show and these guys from Philadelphia came screaming up to us afterwards. They were like, “We’re so excited to see a Montreal band, man!”

PG: Where was the show?

JI: It was at the Divan Orange.

PG: Oh, it was in Montreal.

JI: Yeah, and they were just visiting. We had just played and they were like, “We just knew we were going to see an awesome Montreal band!” Whatever the idea of what that is, I don’t see us fitting into it, so it was strange. 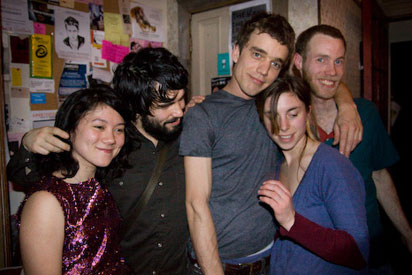 DN: Finally, could each of you say something nice about the other one?

PG: James earlier touched on the combination of My People Sleeping’s vocal sound, and I think that’s my favourite thing about their band—the ghostly drag-queen aesthetic that it has. I’ve heard the word androgynous word used about it, and I think that’s the really beautiful thing about having developed such a tight vocal sound. They’ve almost abandoned their individuality and lost themselves into music that is transcendent. You used that word earlier and I think that’s an apt description because they rise up and out of their bodies. It’s really cool. [Self-conscious laughter.] “It’s really cool. Groovy.”

JI: Literally, Sister Suvi is my favourite band to go watch. It’s the most fun thing to do, of all my friends’ bands—but not just of my friends. And then getting to know him better, Patrick is just the coolest, nicest guy. He’s a very humble and very intelligent dude.