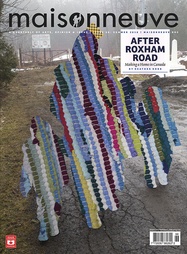 The first time I ate pork, I was twenty-four. It was -August, and I had gone for a small birthday dinner with two friends, one vegan and one omnivore, at a restaurant in Old Montreal. While eating appetizers, my friend Eve tasted her first fresh oyster; when the mains came out, she offered me a bite from her plate, and I ate it unceremoniously, without hesitation.

It was delicious—savoury and rich. After dinner, over drinks with my then-boyfriend and a childhood friend, I was describing the meal, in particular the wild boar that Eve had ordered, which was “so good.” Their faces dropped.

I laughed. It hadn’t even occurred to me.

I was surprised that it didn’t feel like a bigger deal. I was also surprised by what happened to me over the next few years. Since high school, I’d fought back my arm hair and my long dark sideburns. Now, I let them grow. In the right light, brown downy fuzz runs down my neck. I was nervous at first, holding my hands near my face when talking to people. But soon, I began to not care at all. Finally, I felt proud of the darkness on the side of my face.

A cultural marker is something that signals your heritage to others around you. Essayist Garnette Cadogan, born in Jamaica, wrote about how when he moved to the US, he changed his wardrobe so that he could walk around cities more freely and avoid police harassment. But he couldn’t change it completely: even with an oxford shirt and khaki pants, he still wore his Clarks Desert Boots, or, as he calls them, “the footwear of choice of Jamaican street culture.”

For me, eschewing pork had always been an easy marker. I had spent twenty-four years checking ingredients, questioning waiters, and often taking the vegetarian option just to be safe. Our family had a way of inspecting the colour and smell of some of the more ambiguous meats on a buffet table: when there was no clear answer, my mother, born in Montreal and of Irish and Scottish descent, could be the taste tester.

I had countless conversations, sometimes with total strangers, about why I didn’t eat pork. Inevitably, they couldn’t believe I had never tasted bacon. Growing up in Montreal, I found those conversations tedious. But after I’d eaten the boar and had finally tasted bacon, I slowly started to miss their intrusion. I was constantly searching for an in to explain my background, dropping pieces of information into conversations when it wasn’t necessary. The anchors to my heritage became murkier, harder to pin down. I’m the Canadian-born, half-Persian daughter of an Iranian immigrant. I don’t wear a hijab. I don’t speak Farsi. My skin is pale. I love BLTs.

Identity makes its own rules for everyone. My sister, for example, still doesn’t eat pork. After I gave up giving up pork, I needed to find my own way to signal my identity to others.

When I was little, I remember asking my father why, if I was Muslim, I didn’t wear a hijab?He gave me a simple answer through his thick Persian accent: he said the decision was about the level of dress where I felt comfortable, and if I felt fine in what I was wearing, then that was good enough. In the end I never chose to wear a hijab, except to take the photo for my Iranian passport.

A hijab is a brave cultural marker in today’s society. In its 2016 hate crimes report, the National Council of -Canadian Muslims found that women and institutions were the most frequent targets of anti-Muslim hate crimes—people and places whose religion is easily visible. Among the religious groups in Canada, Muslims  tend to have the highest proportion of hate crimes directed against women rather than men. Though I don’t wear a hijab, hearing about anti-hijabi violence only deepens my desire to be true to my background.

My name was a more obvious choice of marker; over time, though, it often naturally shortened. One of my first press passes read “Sara King,” my employer seemingly having no regard for my full name. At first, when people dropped the Abadi, I didn’t mind. It saved me from the hassle of explaining my entire cultural background to strangers, from wincing when they would pronounce it ah-Baaaah-dee, like a sheep, or a-BADDY. (“Like ‘a body,’” I would tell them, gesturing to my own.)

Names are high-stakes. If your name is Lei Li, Xuiying Zhang, Samir Sharma, Tara Singh, Ali Saeed or Hina Chaudhry, you’re 28 percent less likely to get a callback for a job interview than Greg Johnson or Emily Brown, even if you have the same level of experience on your resumé, according to a recent study conducted by researchers from the University of Toronto and Ryerson University. Not to mention it makes -border-crossing more fraught: the last time I crossed into the US by car, in 2017, was shortly before Trump’s first “Muslim ban” was poised to come into effect. I was with three friends, and the border guard was scanning all four passports when she looked at me: “Where were your parents born, Sara?” She handed back the passports, never even asking the name of my dirty-blonde, blue-eyed friend who had a DUI.

I got used to hearing my full last name again in one of the newsrooms where I worked, where sometimes there would be four Sara(h)s in at once. After I heard it on the regular, I started to wonder why I had been so complacent about letting it go in the first place.

Growing my facial hair out was an even easier choice. As a teenager, I’d been so self-conscious about how I looked. In high school, sitting on my friend Vicky’s living room floor while watching The Shawshank Redemption, she rubbed pre-waxed strips onto my arms, leaving them bare. By my late twenties, I no longer saw the point: the end result was to conform to a mainstream beauty ideal that effaced my heritage alongside my hair.

My father deserted the Iranian air force while training in Biloxi, Mississippi, in the 1970s. He made his way to Montreal, to Concordia University, where he met my mother. Early on in their relationship, on a date at a restaurant, he ordered pea soup. -Mid-slurp, he showed her a pinkish cube, asked what it was, then ran to the bathroom and threw it up.

Years later, this April, I followed the sentencing hearing for Alexandre Bissonnette, the Quebec man who walked into a mosque last winter and murdered Ibrahima Barry, Khaled Belkacemi, Abdelkrim Hassane, Azzeddine Soufiane, Aboubaker Thabti and Mamadou Tanou Barry. When I woke up I would scan the widgets on my phone, digesting each new piece of information about the killings.

Reading the news, I thought of my father. The shooter told police that he was trying to save lives. “I was watching TV and I learned that the Canadian government was going to take more refugees, you know, who couldn’t go to the United States, and they were coming here,” he’d said the day after the shooting. “I saw that and I, like, lost my mind.”

Even though my father doesn’t go to mosque, even though he chose not to claim asylum after deserting the air force, I still feel the similarities between him and those men. The hateful rhetoric that led to their deaths hits me in the gut.

He is seventy now, and he’s remarried to a Persian woman. After decades in Canada, he’s now speaking English less frequently than he used to. Sometimes he’ll turn to me, speaking in Farsi and waiting for a response, forgetting I’m not fluent; in Farsi, I can count to twelve and offer you tea. I wish we were more capable of communicating in the same language.

At the same time, I do have my own connection to Farsi—the names for different foods my family would share when I was a child, like koobideh, ghormeh sabzi and our favourite, tahdig, a crispy golden rice. I may like bacon now, too, but I still don’t like ham, and I can’t stomach pepperoni on pizza—it tastes like being at a sleepover and peeling the greasy slices out from under the cheese.

At the end of the day, I think back to my father’s advice about the hijab: it’s about what makes me feel comfortable. I didn’t start using my full name, or revert to my hairy face, only to signal to others who I am. Most importantly, I needed to know for myself.